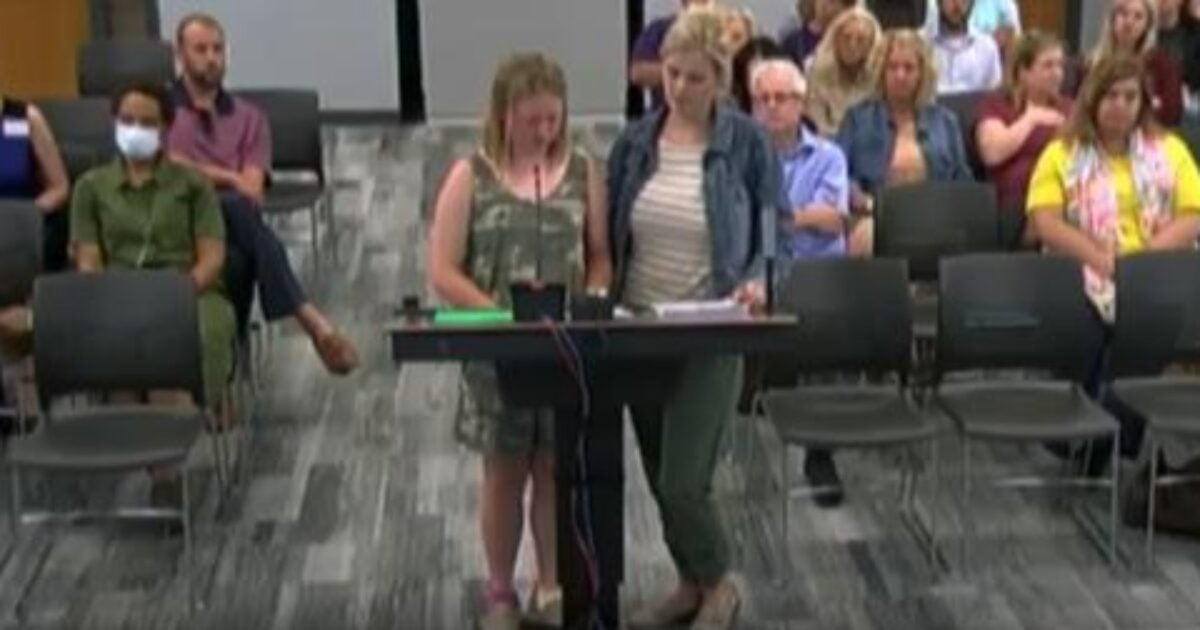 A white Indiana schoolgirl born in an abusive home, who later lost her biological family and who eventually wound up being raised in a foster home, showed up at her local school board hearing this week to ask district officials why in the world they believe she benefits from so-called “white privilege.”

“I was told that I have white privilege. How can a child born in an abusive drug and alcohol abuse home who lost her entire biological family, that has experienced all forms of abuse, be privileged?” the young girl said to district officials.

“If you found a child at 15 months in a home with holes in the floor eating cat poop, would you consider them privileged? Just asking, because when I was told that, I was upset and cried myself to sleep,” she added.

Video footage of her stunning, emotional testimony quickly went viral afterward because of just how powerful her words happened to be.

Watch her full statement below:

Something amazing happened at our local School Board meeting last night.

This brave little girl described her own experience in a school that has abandoned traditional academics for social emotional learning.

This is an Indianapolis suburb.
We thought it wouldn’t come here. pic.twitter.com/YoaVxZlpGJ

Lasting about two-and-a-half minutes, the testimony covered both her local school district’s clear-cut embrace of critical race theory propaganda and also its obsession with sexuality.

“I have been in counseling as long as I can remember because I was adopted from foster care at age four. The things I have learned along the way are being challenged now when my science or math teacher is trying to teach me how to be emotionally. And why are they teaching me about sexuality and how to identify?” she said earlier in the speech.

“I don’t want to hear about sexuality during class in front of other students, because that should be a private thing. This should be left in the homes and between students and counselors in one-on-one conversations. This has been a very traumatic part of my past, and the more the school focuses on sexuality, the more it affects me and my anxiety. It leaves confusion and frustration in my mind, and I don’t know how to deal with that because they only focus on more content that I feel hurt about,” she added.

It was at this point that she asked the officials about so-called “white privilege” in the bolded remarks seen up top. She then pivoted to talking about the need for schools to stop promoting such divisive propaganda.

“We have to stop the stereotypes and bitterness towards groups because it gets us nowhere but divided. … They are trying to divide us into two groups instead of bringing us together as one. Everyday I felt less and less valued as a student, and failed every class this past year,” she said.

“Academics are not important here — only how we feel and making sure that we learn about sexuality, political topics and emotional topics that teachers may or may not be able to handle, especially with trauma children like myself,” she added.

She concluded her speech by, it appears, announcing that she was switching schools.

“I’m happy to move on and begin a fresh start and hope that this next school will love me for me and challenge me to grow in areas that I’m good at. I just want people to love one another, and the way we’re doing that is wrong,” she said.

Another clip from the meeting shows her foster mother hugging her tightly afterward:

The final few seconds cut off by Twitter time limit.

Both of her foster parents appear to be active on social media.

@dbongino check this out! So proud of my daughter’s bravery! https://t.co/L46NrNqdhm

This was hard as a dad to see my child go through and to be vulnerable to allow her to get in front of this people. I’m so proud of her courage to step out! https://t.co/rJBFYtz7nJ

As the clip went viral, some other parents noted that their children have also encountered this divisive propaganda in their schools.

My own TEN YEAR OLD Has also cried and complained this identity and sex Ed is giving her anxiety and stressing her out, it’s actually gaslighting young people.

My daughter was bullied and called racial slurs in elementary school. It needs to stop!

Others meanwhile slammed the “repugnant” adults who continue to defend the teaching of CRT propaganda to young, impressionable children.

I hope every woke educator there felt deep shame when she heard the words “instead of bringing us together as one”.

The people behind this shit are pure evil. How can they not see the damage this is causing?

The latter Twitter user above asked, “How can they not see the damage this is causing?”

Likely because CRT propaganda has been embraced by every institution in the United States, including the federal government and the military.

And so while the young girl’s testimony was powerful and moving, it’s not clear if it’ll be enough — if any of the backlash will be enough — to stop America from going down the path of racial essentialism.