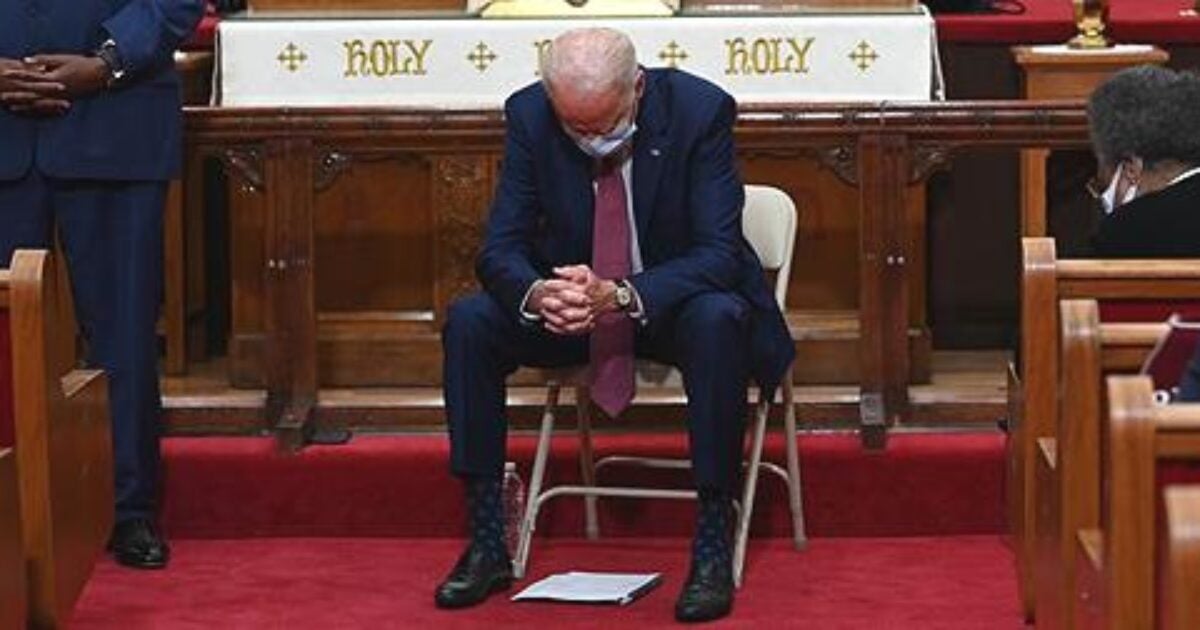 Despite the media’s constant portrayal of President Joe Biden as a devout Catholic, the nation’s most high-profile Catholics appear to view things differently.

They view things so differently, in fact, that they’re reportedly mulling issuing an advisory document stating that Biden and other pro-abortion politicians should cease and desist from seeking Communion.

The document, currently being drafted by the church’s Committee on Doctrine, will be initially unveiled at the upcoming U.S. Conference of Catholic Bishops in June, as reported Wednesday by the Associated Press.

If the document is eventually approved, it’d “make clear the USCCB’s view that Biden and other Catholic public figures with similar viewpoints should not present themselves for Communion,” according to the AP.

However, it would not be enforced, meaning every individual bishop would still have the right to offer Communion to whomever they choose.

“In Biden’s case, the top prelates of the jurisdictions where he frequently worships — Bishop W. Francis Malooly of Wilmington, Delaware, and Cardinal Wilton Gregory of Washington, D.C. — have made clear that Biden is welcome to receive Communion at churches they oversee,” the AP noted.

The president hasn’t always been so fortunate.

“Sadly, this past Sunday, I had to refuse Holy Communion to former Vice President Joe Biden. Holy Communion signifies we are one with God, each other and the Church. Our actions should reflect that. Any public figure who advocates for abortion places himself or herself outside of Church teaching,” Morey told local newspaper The Morning News at the time.

Morey isn’t alone in his distaste for the president’s views.

“There’s a growing sense of urgency. Abortion is not just one among many important issues. … It’s a direct attack on human life,” San Francisco Archbishop Salvatore Cordileone said in defense of the USCCB’s interest in issuing an advisory document.

“They need to understand the scandal that is caused when they say they are faithfully Catholic and yet oppose the church on such a basic concept,” he added.

Indeed, though some might argue that it’s a concept that the media should appreciate as well. To hear them tell it, Biden is the most devout Catholic in America. Yet when it comes to Supreme Court Justice Amy Coney Barrett, whose political views actually align with her Catholicism, they act as if she’s the norm-violating heathen.

But according to Archbishop Joseph Naumann of Kansas City, Kansas, who reportedly chairs the USCCB’s Committee on Pro-Life Activities, there can be no denying that the pro-abortion position is “a grave moral evil.”

“How can he say he’s a devout Catholic and he’s doing these things that are contrary to the church’s teaching?” he asked the AP.

That said, some bishops think an advisory isn’t enough.

“Archbishop Samuel Aquila of Denver, who has sharply criticized Biden’s abortion stance, told the AP he favors creation of a national policy on Communion, as opposed to the current ‘patchwork approach. He said bishops should first have a private conversation with an individual deemed to be in a state of sin, and deny Communion if they persist,'” the AP reported.

Edward Peters, a canon law teacher at Detroit’s Sacred Heart Major Seminary in Detroit, said the USCCB could conceivably ask the Vatican to approve such a policy, though he expressed doubt over the request actually being made. He did agree though that the USCCB has to take some sort of action.

“The bishops’ conference does have broad responsibility to speak out on matters that impact the effectiveness and clarity of Church’s mission. The bad example being given by some high-profile Catholics who consistently fail to protect innocent human life is surely one of those matters,” he told the AP.

Biden has a history of incessantly speaking out in favor of both so-called “pro-abortion rights” and religious freedom at the same time:

There is an assault on abortion access, and today it has reached the Supreme Court. It’s time for our leaders to stand up for women’s rights. https://t.co/RFEUC1YLjM

We need judges who will respect Roe v. Wade as the law, and we need a Congress that will protect reproductive rights. If I’m president, that leadership will start at the top.

I’m grateful for @PPact‘s support and proud to stand with them in this fight. As president, I’m going to do everything in my power to expand access to quality, affordable health care — including reproductive health care. https://t.co/dYHAOGlfSQ

We need a president who respects religious freedom. pic.twitter.com/5PrjnXCig5

Yet only months into his administration, he’s only made overtures toward enhancing so-called “pro-abortion rights.”

On the eve of this year’s March for Life, the president rescinded the Trump-era Mexico City Policy that had prevented taxpayer funds from being used to fund abortions overseas.

Meanwhile, late last month Secretary of State Anthony Blinken announced “plans to prioritize abortion and other leftist political issues – a sharp turn away from the Trump administration’s focus on religious freedom and basic human rights for all, including the unborn,” as reported by LifeNews.com.