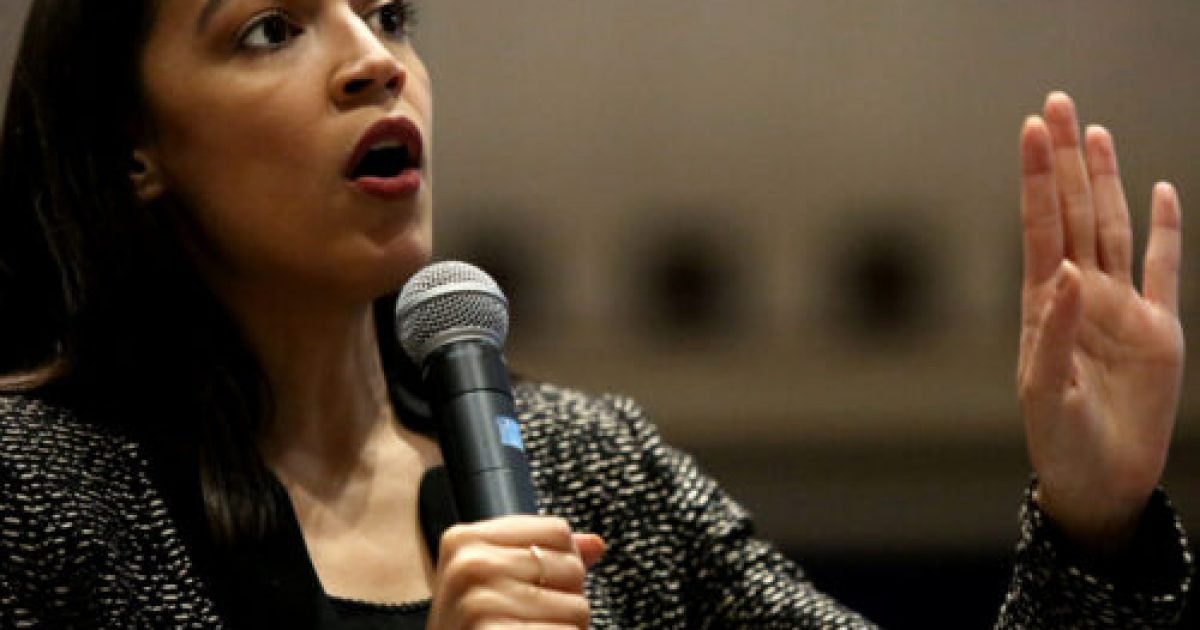 Most of the items contain slogans that capture the heart of her radicalism, i.e., “Abolish ICE,” “Medicare For All,” “The Green New Deal” and “Tax The Rich.”

One now-viral “Tax The Rich” sweatshirt is quite ironic since AOC, who appears to be relatively wealthy, has a history of not paying her own taxes.

Incidentally, the sweatshirt is priced at a whopping $58, which is $22.01 higher than the $35.99 price recommended by Bonfire for a “crewneck sweatshirt.” Bonfire is an online platform that allows people to design and sell their own apparel.

It’s further ironic because AOC, who announced preorders for the sweatshirt on Wednesday, according to Fox News,  portrays herself as a champion of the poor. Yet it seems unlikely that the poor are apt to spend nearly $60 — potentially enough to pay off a water, phone, or maybe even electricity bill — on a sweatshirt. A plain one, at that.

Like conservative commentator and frequent Rep. Alexandra Ocasio-Cortez (D-Capitalist Pig) critic, Ben Shapiro wrote in a tweet, “Only the rich can afford this idiotic sweatshirt.” Indeed, though he wasn’t the only one to point this out.

Only the rich can afford this idiotic sweatshirt pic.twitter.com/PpVaBl8J6V

@AOC According to your salary, you’re well inside the top 5% earners. YOU ARE the RICH! #AOC pic.twitter.com/xI9BHH6TZ3

The socialist @AOC is selling sweatshirts denouncing capitalism at a big markup. Shouldn’t she be giving them away for free? Greedy, selfish capitalist pig!

Socialist AOC trying to sell a $58 sweatshirt is the definition of tone deaf.

AOC charging 58$ a pop for a sweatshirt that says “tax the rich” LITERALLY CONTRADICTS ITSELF.

Honestly, @AOC nailed it with the $58 “tax the rich” sweatshirt. Elites telling working class people they’re fighting for them and then ripping them off is Marxism 101

Girl the only ones who are able to buy this sweater are the rich ppl you’re trying to tax 🤦🏼‍♀️ and if poor ppl buy it, how sad you got them to spend $58 + tax and shipping ugh 🤦🏼‍♀️ #yikes

I think if “taxing the rich” is so important to you, then the Congress & Senate should lead by example & stop giving themselves raises first. You are the ones with $12k freezers full of ice cream. You just want more of their money to line your pockets.

At $58.00 for a sweatshirt, you’re not taxing the rich, you’re overcharging the stupid.

Even some Democrats who “love” the congresswoman were critical of her.

the irony of a $60 sweatshirt that says tax the rich… aoc why are you doing this? we love you but why

When AOC learned of the mockery, she “clapped back,” as her groupies would say, by asking what the difference is between her and President Donald Trump.

“Republicans are freaking out bc we don’t use slave-wage labor for merch that funds grassroots organizing. But what’s the difference between Trump’s merch and ours? Ours is made in the US,” she wrote.

Republicans are freaking out bc we don’t use slave-wage labor for merch that funds grassroots organizing.

But what’s the difference between Trump’s merch and ours?

Ours is made in the US. 🇺🇸

While she deserves credit for manufacturing in the United States, her insinuation that the president’s gear is manufactured elsewhere is wrong.

“[T]he official Trump gear sold on the campaign website is made in America by American workers,” Charleston station WCIV reported in March after an investigation.

As for the real difference between AOC and Trump, it’s simply that the president isn’t a raving socialist who spends virtually every waking moment hypocritically trashing America’s capitalist ethos and a free-market economy.

Not to mention demanding practically everything be provided to people for free and pursuing policies that would bankrupt the entire system.

The difference is trump
Is not a hypocrite. Free free free free. But when it come to you you want the money. Like every socialist. Liars

As noted earlier, AOC’s hypocrisy runs exceptionally deep. So does her deception.

Last year she vowed to pay her staffers a so-called “living wage.” Yet she neglected to mention that she wouldn’t be the one funding their salaries.

Also, she’s known for taking “gas-guzzling car rides” despite demanding cars be eliminated, continuing to collect a salary despite demanding others in Congress not accept theirs, and failing to provide workers’ compensation to her campaign staff.

And, to top it off, none of the proceeds from her gear will reportedly be going to charity.

“Purchases are campaign contributions,” a tiny disclaimer hidden at the tail end of a “Frequently Asked Questions” page reads: