John Bolton, the ousted national security adviser who’s now a vocal anti-Trumper, was attacked by Twitter leftists after reiterating that he will not vote for Democrat Joe Biden despite his disdain for President Trump.

For months, Bolton was celebrated by the left for trashing the president in his anti-Trump book. But now that he won’t endorse Biden, the same leftists who gleefully used him as a cudgel to attack Trump have turned on him.

The brouhaha erupted after CNN’s Wolf Blitzer tried to goad Bolton into endorsing Biden by saying a number of former Republican national-security officials have endorsed Joe.

That’s when Bolton interjected: “I am not backing Biden, just to be clear. I’m going to write in the name of another Republican.”

John Bolton: "I'm not backing Biden… I'm going to write in the name of another Republican." pic.twitter.com/QUutLWtq0v

Predictably, Twitter leftists turned on Bolton — the same way they turn on every Republican who refuses to toe the Democrat Party line.

“John Bolton is [a] cowardly rat and deserves the Karma that is inevitably coming his way.”

John Bolton is cowardly rat and deserves the Karma that is inevitably coming his way.

“John Bolton still and always will suck. Never forget that.”

“John Bolton is a coward.”

john bolton is a coward. pass it on.

“If there’s one positive outcome of the last four years, it’s that now everyone hates John Bolton.”

If there's one positive outcome of the last four years, it's that now everyone hates John Bolton.

In a repeat of 2016, the media are promoting a barrage of dubious polls suggesting that Biden will easily defeat President Trump on November 3.

However, numerous Trump supporters pointed out that the president is actually polling better in battleground states than he was in 2016, when he crushed Hillary Clinton with a massive Electoral College win.

OANN’s Jack Posobiec — a former Navy Reserve intelligence officer — warned that the pro-Biden polls rabidly being pushed by the media are part of the left-wing PSYOPS (psychological operations) machinery.

He suggested that they’re designed to demoralize Trump supporters into thinking that Trump has no chance to win, so they’ll stay home and not vote.

Posobiec tweeted: “Getting dozens of texts and DMs this week that all ask ‘Jack, is Trump losing?’ Media poll demoralization is setting in among people who didn’t go through 2016. The only way out is through.”

Getting dozens of texts and dms this week that all ask ‘Jack, is Trump losing?’

The only way out is through

Author Taylor Marshall remarked:  “Trump is polling BETTER in battleground states in 2020 than he was in 2016.”

He continued:  “Conclusion: Trump will win but you MUST convince people to vote Trump because the Dems will try to steal it in liberal SWING COUNTIES. We MUST win by a wider margin to defuse cheating.”

Reminder: Political scientist Helmut Norpoth — who accurately predicted the winner of the past six presidential elections — confidently projects that President Trump has a 91% chance of winning.

“This forecast is unconditional and final,” Norpoth said. 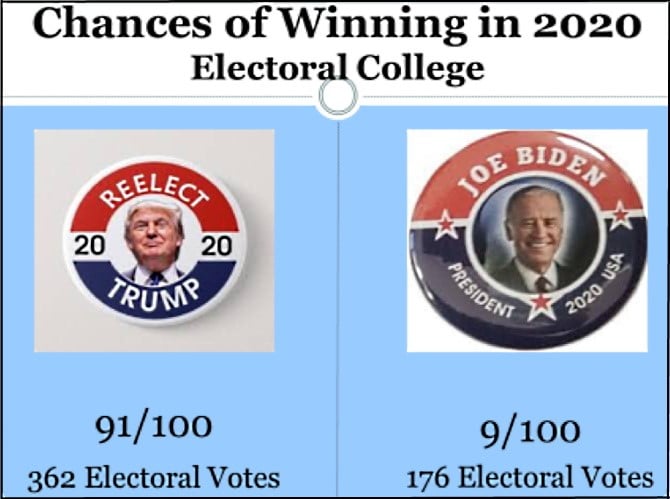 In the New Hampshire primary race earlier this year, Trump got more than double the votes that Barack Obama got in 2012. Trump also scored a record turnout for an incumbent in the Iowa Caucuses.