According to the Daily Mail, a recently-released batch of tax filings illustrate how Cullors dipped into the charity’s money to pay extravagant fees to friends and family for “consulting services,” to say nothing of the private flight she chartered. The tax documents—included in a 63-page Form 990 filing, which is required for non-profit organizations to maintain their tax-exempt status—indicated that BLM paid a lavish sum of $970,000 to a company owned by Damon Turner, reportedly Cullors’ baby daddy, for producing live events and providing “creative services.”

Meanwhile, a consulting firm operated by Shalomyah Bowers, who happens to be BLM’s board secretary and had served at one point as the organization’s deputy executive director, reportedly received over $2 million to provide staffing, fundraising, and other “operational support” for the foundation.

It’s not the first time BLM has been scrutinized for its questionable finances. Patrisse Cullors was forced to resign from the organization last year amid accusations that she was dipping into BLM’s till for personal reasons—accusations she has vehemently denied.

Then there was the whole issue of the luxurious six-million-dollar mansion in Los Angeles that BLM acquired last year, which immediately drew the ire of activists and social justice warriors. The Studio City estate featured six bedrooms and bathrooms, a soundstage, office space, and a nice swimming pool, all of which BLM justified as a “campus for a black artists fellowship,” the Daily Mail reported.

The BLM organization—officially known as “Black Lives Matter Global Network Foundation, Inc.”—amassed quite a fortune for itself during the last fiscal year, which spans the period from July 1, 2020, to June 30, 2021. The Form 990 filings reveal that the organization accumulated $42 million in net assets, with an operating budget of $4 million.

Shalomyah Bowers, whose consulting firm received the heftiest payout from the BLM foundation, fought back against the allegations of fiscal impropriety.

“This 990 reveals that (the BLM foundation) is the largest black abolitionist nonprofit organization that has ever existed in the nation’s history,” he said. “What we’re doing has never been done before.” Bowers currently serves as one of three members on BLM’s board of directors.

“We needed to get dollars out to grassroots organizations doing the work of abolition,” he added, “doing the work that would shift the moral tide of this world towards one that does not have or believe in police, prisons, jails or violence. Our firm stepped in when Black Lives Matter had no structure and no staff. We filled the gap, when nothing else existed. But let me be crystal clear, there was no conflict of interest.” MCLEAN, VIRGINIA - JUNE 17: The headquarters of USA Today owned by Gannett Co. is seen June 17, 2022 in McLean, Virginia. USA Today said that following an investigation 23 articles had been removed from its website after it was discovered that a reporter may have fabricated sources and quotes for the articles. (Photo by Win McNamee/Getty Images)
Ex-USA Today editor who spoke out on paper’s woke-ness explains what sent him ‘around the bend’ Ex-USA Today editor who spoke out on paper’s woke-ness explains what sent him ‘around the bend’
MCLEAN, VIRGINIA - JUNE 17: The headquarters of USA Today owned by Gannett Co. is seen June 17, 2022 in McLean, Virginia. USA Today said that following an investigation 23 articles had been removed from its website after it was discovered that a reporter may have fabricated sources and quotes for the articles. (Photo by Win McNamee/Getty Images) 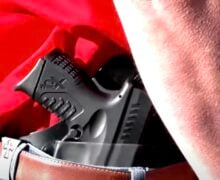