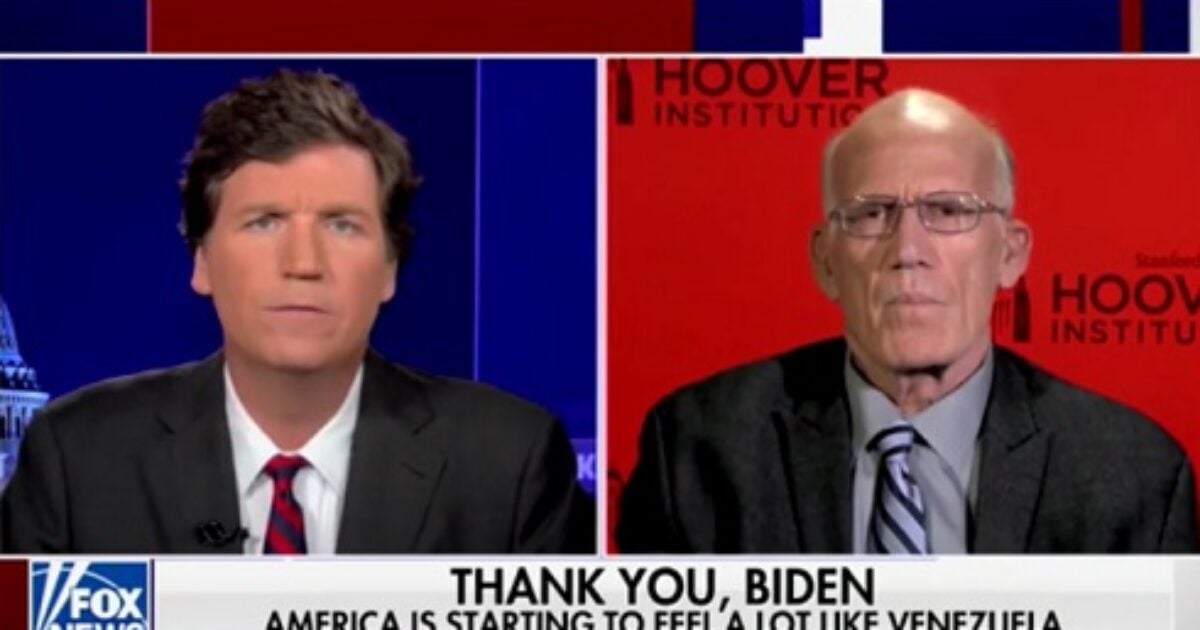 Hoover Institution senior fellow Victor Davis Hanson put forth a prediction about the midterm elections on Wednesday that could be disquieting for Democrats.

“There’s going to be a reckoning,” the historian said on Fox News’ “Tucker Carlson Tonight.”

“I think whether it’s Mexican-American communities on the border or where I live, or soccer moms mad about what’s being taught in schools, it’s not a top-down, woke revolution. It’s a grassroots populist revolution. We’re going to see it in the next midterms I think a lot of these institutions are going to rue the positions they’ve taken and the damage they’ve done,” he said.

Tucker remarked that vaccine mandates and the hysteria induced by so many miscues from the government during the pandemic are destroying so much of the country’s fiber. Hanson agreed and said that the mandates are destined to make inoperable U.S. hospitals, airlines, police departments, fire departments, as well as long-term care facilities. He said that criticism of the Biden regime was no longer just coming from conservatives but from liberals as well.

“It’s not Tucker Carlson that’s saying this alone,” Hanson noted. “It’s Barack Obama who says the border is unsustainable. Or Larry Summers saying the economic agenda won’t work. Or senators on the Democratic side said Afghanistan is a disaster. So it’s everybody that’s saying ‘what’s going on? We’ve never seen anything like it.”

Hanson went on to say that it’s nearly impossible to point to any one issue currently plaguing the country. The problems are innumerable.

He asked, “Is it incompetence? Accidental? Is it non compos mentis problems with the president,” he continued, “or is by design an, anarchy, a chaos, a nihilism…to have an agenda that doesn’t pull on any of its items 50 percent but through the sheer fear of this chaotic, anarchic, ‘we are going to have a new agenda that is socialist,’ and nobody knows …”

Hanson said that a deluge of executive orders have been crippling in their effect, and in terms of reckless spending, he denounced “new monetary policy” – a concept that says you “print money and you get prosperity” as a fool’s errand.

The professor added that academic institutions are in a crisis of conscience as so many of them are embracing toxic critical race theory.

“The academic world has filtered down to the concrete world under this agenda, and they are really, really frightened, and they are saying we’ve never seen something like this before,” he said.

“When they looked to these institutions you mentioned, they look at the military or professional sports or entertainment or Hollywood or Silicon Valley or social media or network news or Wall Street or the corporate boardroom and they say what happened? We don’t recognize it anymore,” Hanson said.

“We have been asleep and they have filtered into all these institutions with this agenda we don’t want, and it doesn’t work.”