Playboy, the entertainment magazine traditionally meant for heterosexual men, decided to feature a gay biological man on the cover of its October issue.

But to be clear, the man featured on the latest issue’s cover isn’t a gay biological man who identifies as transgender, i.e., a transgender woman. The man is a “man man”, raising the question of who exactly the magazine trying to market to.

Not to say that the magazine featuring a transgender woman, which it did in 2017, would have been any less controversial. However, critics say this move is even more controversial, in that it makes even less logical sense than the last move.

View the cover below:

Despite the controversial nature of the cover, the Oct. 1st tweet above posted by Playboy hasn’t been ratioed. As of Thursday, it has over 12,000 likes, 2,600 retweets and 1,900 comments.

A stunning number of the retweets and comments were from gay men and heterosexual women — who, for the record, have never been Playboy’s target audience.

GOOD FOR YOU HANDSOME!!!

But it appears that the majority of the retweets and comments have been from critics who’ve been quick to say that the company is essentially killing itself.

In fact, it can be argued that it’s been killing itself. Back in 2018, Statistica reported that Playboy’s circulation had dropped from a high of 5.6 million subscribers in 1975 to a low of roughly 200,000 in 2018. One of the bigger recent drops happened between 2016 and 2018, when the company shed half a million subscribers. 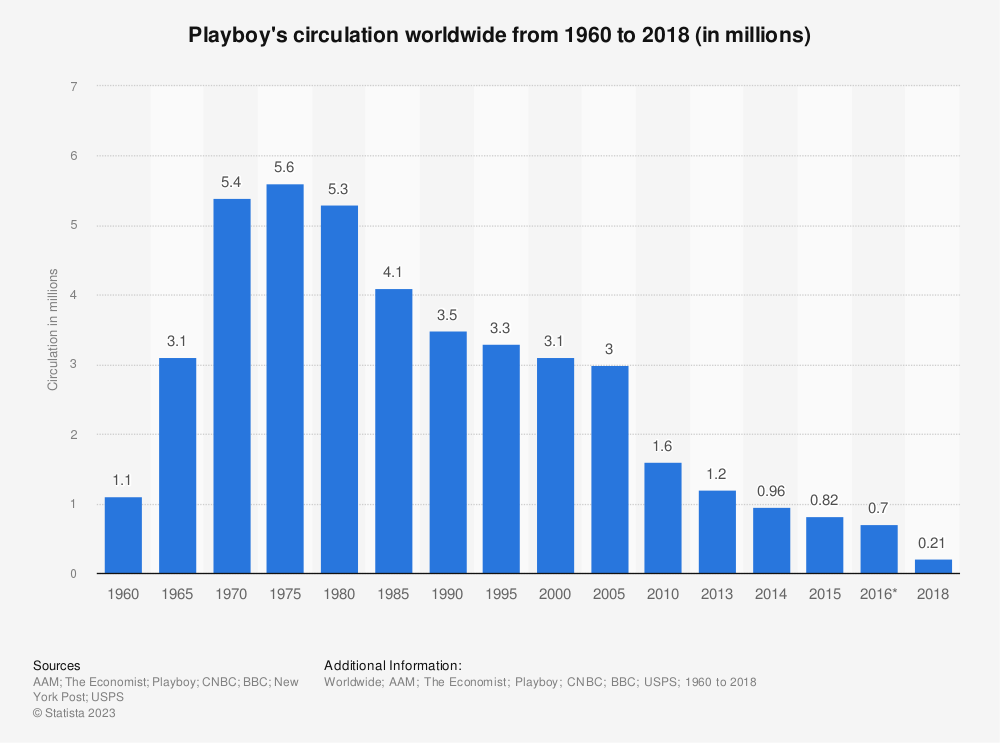 In 2019, The New York Times ran a profile about Playboy going “woke.”

“This is a newer, woke-er, more inclusive Playboy. … The summer issue, out now, features an interview with Tarana Burke, the activist who founded the MeToo movement, conducted by Dream Hampton, whose documentary about R. Kelly led to multiple charges against the singer. There is a queer cartoon and a feature on gender-neutral sex toys. The fall issue will feature a photo essay by the artist Marilyn Minter celebrating female pubic hair,” the Times reported.

It’s not clear in what universe men — even gay ones — are interested in learning about female pubic hair.

“We have red hair, blond hair, black hair — it’s basically every color of the rainbow,” the magazine’s art director, Liz Suman, proudly told the paper at the time.

“I’ve been sneaking in some penises, too,” she added.

See some of the backlash to Playboy’s tweet from the presumably straight males who would have once been avid subscribers:

Playboy has been dead for a while now, folks. Case in point as to why…

Playboy’s being dying for years and we all know it. All this would do is drum up attention and sales for this issue but drive away their core base. The expanded audience they were going after, now sated, will drop it and not look back

Say goodbye to your customers. Lol.

So, a magazine aimed at men that profited off the obvious thing men did with those magazines tries to appeal to its customer base by using a model that will appeal to a small minority of that customer base? Like uhm… your publicity department ok?

Hear me out. Maybe just bring back Playgirl?

Note what some of the critics wrote about bringing back Playgirl.

Geraldo did it better pic.twitter.com/Qn2EJB7Vxm

Its last print was in 2016. It’s not clear why exactly it was canceled.

It does seem clear to many though that Playboy is definitely headed the same route. From “sneaking in penises” to featuring biological men on the cover — sometimes as men, other times as transgender women — the magazine appears to have lost the plot.

The Times noted in its 2019 piece that its recent decline coincided with the death in 2017 of the magazine’s founder, proud heterosexual man Hugh Hefner.