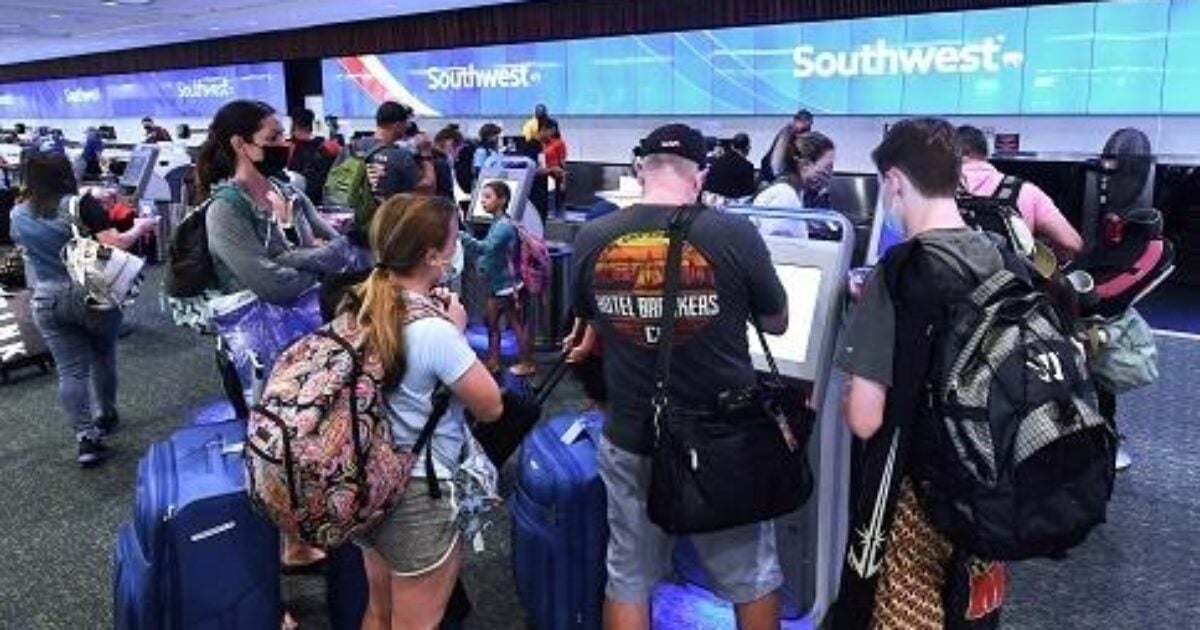 Southwest Airlines has reportedly cancelled nearly 2,000 flights this weekend alone, and the evidence strongly suggests that the reason why is because of a massive anti-vaccine mandate protest.

“Southwest Airlines canceled more than 1,000 flights, 27% of its schedule, on Sunday as disruptions that the airline blamed on air traffic control issues and bad weather affected the travel plans of thousands of customers,” NBC News confirmed Sunday.

According to NBC News, 808 flights were cancelled on Saturday.

The report came roughly 12 hours after NewsNation national correspondent Leland Vittert, formerly of Fox News, reported on Twitter that the 808 cancellations from earlier that day were because of a “sickout.”

His report is buoyed by the flurry of angry responses that were directed at the airline after it it posted a tweet Saturday afternoon blaming the disruption on air traffic control issues and bad weather.

The tweet triggered an outpouring of fliers accusing the airline of lying.

“This is all untrue info. This is not due to weather… All of our flights have been cancelled because employees are walking out due to the vaccine mandate. We were notified at midnight our second flight was cancelled and they won’t allow me to cancel the first leg. On hold 3.5 hrs,” one flier wrote.

Others reported the same. Some also drew attention to the fact that other airlines clearly weren’t affected by these alleged issues.

This is all untrue info. This is not due to weather… All of our flights have been cancelled because employees are walking out due to the vaccine mandate. We were notified at midnight our second flight was cancelled and they won’t allow me to cancel the first leg. On hold 3.5 hrs

Bull. Your own employees working at the gate in the airport told everyone standing there that cancellation was due to employee protest of the vaccine mandate.

A gate agent told me that it was because of workers and the weather story was not true. I’m stuck in Cabo (worse places to be stuck, I admit) and NEED to get home. A couple in my group were told they can’t get home for 3 days after waiting at the airport for 6 hours!!!!

Don’t try telling anyone that their flight was cancelled due to weather. I dont see a storm covering the entire country???? pic.twitter.com/yWKU0kglRS

ONLY canceled flights are @SouthwestAir. This is NOT related to ATC OR WEATHER. pic.twitter.com/BuKek4Wo7A

The @SouthwestAir mass cancellation/delay problem may be a mass sickout protesting the company forcing vahqseens on them.

See below. They blamed weather, but other carriers were unaffected? 🤔

Employees: You have more power than you know. Stand up to your employers. #solidarity pic.twitter.com/0jPTdB7iFR

The start of disruptions on Saturday came exactly a day after the Southwest Airlines Pilots Association amended an ongoing lawsuit against the airline to include complaints about its vaccine mandate.

Filed in August, the original suit claimed that Southwest Airlines had “implemented an ’emergency time off’ program, altered schedules, and scaled back prescription drug and retirement benefits without bargaining, in violation of federal labor law,” as reported by Reuters.

On Friday, the union amended the suit by asking the court “to temporarily block the company from carrying out federally mandated coronavirus vaccinations until an existing lawsuit over alleged U.S. labor law violations is resolved,” according to Bloomberg.

“The Southwest Airlines Pilots Association’s filing Friday also asked for an immediate hearing on the request before a federal court in Dallas, claiming the carrier has continued to take unilateral actions that violate terms of the Railway Labor Act, which governs airline-union relations. Those steps include the Covid-19 vaccination requirement,” Bloomberg reported.

“The new vaccine mandate unlawfully imposes new conditions of employment and the new policy threatens termination of any pilot not fully vaccinated by December 8, 2021. Southwest Airlines’ additional new and unilateral modification of the parties’ collective bargaining agreement is in clear violation of the RLA,” the filing itself reportedly reads.

In an emailed statement to Bloomberg, the airline basically said it doesn’t feel that pilots should have the right to negotiate what goes into their bodies …

“The airline disagrees with SWAPA’s claims that any Covid-related changes over the past several months require negotiation,” the airline wrote, reportedly adding that it’s committed to working with its unions “as we continue navigating the challenges presented by the ongoing pandemic.”

American Airlines has also cancelled flights this weekend, albeit not nearly as many — only 63 on Saturday, according to NBC News.

Those cancellations came two days after hundreds of American Airlines workers and supporters protested outside the airline’s headquarters in Fort Worth: