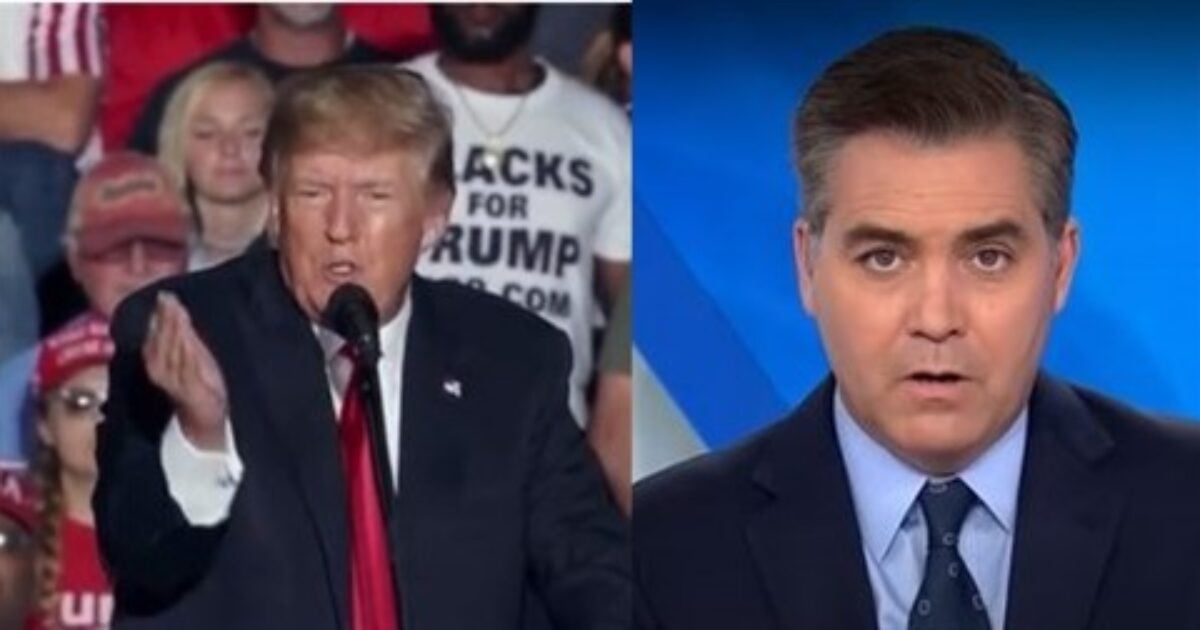 Like many other liberals, Jim Acosta is completely obsessed with former President Donald J. Trump who despite the relentless efforts to cancel him continues to draw massive crowds to rallies as he contemplates another White House run in 2024.

On Saturday, Trump traveled to the battleground state of Iowa where he drew thousands of enthusiastic supporters to hear his message of hope in a dark time while Acosta oozed contempt, expressing his disapproval that the previous and possibly future POTUS was joined by Republican lawmakers at the Iowa state fairgrounds in Des Moines.

Acosta bemoaned the presence of Governor Kim Reynolds and Senator Charles Grassley who recently announced that he will be running for reelection next year, resorting to the overwrought hyperbole that the self-proclaimed “most trusted name in news” has churned out since Trump rode down the escalator to announce his candidacy in 2015.

He shamed both Republicans in a segment that was heavy on the projection that America is becoming a “nation of bullies” that is not at all the fault of the party power that is intent at forcing conservatives to bend the knee and punctuated it with a bizarre remark about the darkness in Trump’s soul and whether it was creeping into theirs as well.

Acosta remarked, “It’s twisted and evil. I’m sorry, you listen to what he just said about the Haitian migrants and say that’s not evil,”

“Trump is scheduled to hold yet another rally with top GOP lawmakers in Iowa this evening,” he said, “and these politicians have to ask themselves, why are you sharing the stage with that man after what he just said about Haitian migrants?”

“And what he did to this country on January 6,” Acosta continued, “When you do stand next to him, ask yourself, can you feel the darkness the fills his soul filling yours too?”

“If it sounds like a bad sequel, we can only imagine what the closing scene of that sequel looks like.” Acosta said. “On inauguration day 2025, if Trump returns to power, which flags will the bullies drape across the Capitol? Ours, or his?”

Like his fellow travelers in the media, Acosta continues to harp about the so-called “insurrection” at the Capitol, a mostly peaceful event that nonetheless was hysterically hyped as a coup d’etat, a ridiculous assertion albeit one that Democrats have flogged to death to make Trump’s name toxic – it hasn’t worked.

During the rally, a vibrant Trump hit all the right notes and the huge crowd that turned out has to fill people like Acosta with dread that he will be a powerful influence in the 2022 midterms when Americans can strike a blow against tyranny by prying the gavel from Nancy Pelosi’s clutches.

Trump had harsh words for Madam Speaker in Des Moines, calling her a “nut job” and calling for resistance to the ongoing “extreme power grab” by Biden and “crazy Nancy Pelosi” that he warned was putting America on track to be a socialist or even a communist country.

Trump: "You really have to stand strong and firm against Biden, crazy Nancy Pelosi, she's a nut-job." https://t.co/VlT7z8v2lm pic.twitter.com/Y1le8l4Ea6

He also slammed the $3.5 billion “Build Back Better” package as a “monstrosity” and “so dangerous for our country” as well as the media and Democrats who see it as a way to fundamentally transform the nation into a place more compatible with their extreme ideology.

“They are sick people and they’re really hurting our country,” Trump said. “Practically every single Democrat lawmaker in the House and Senate has endorsed this deranged legislation and that’s why every single one of them has to be voted out of office next November.”

Trump remains extremely popular in the Hawkeye State as he does in most of America outside of the coastal strongholds of the leftist cultural elite and it drives the establishment types absolutely crazy, especially in the studios at CNN.

Acosta is notorious for his rude heckling during Trump’s first four years, including an incredible moment when he disrupted the historic peace talks with North Korean leader Kim Jong Un, a feat that he later boasted about.

He just can’t get Trump out of his head and should probably consider therapy.