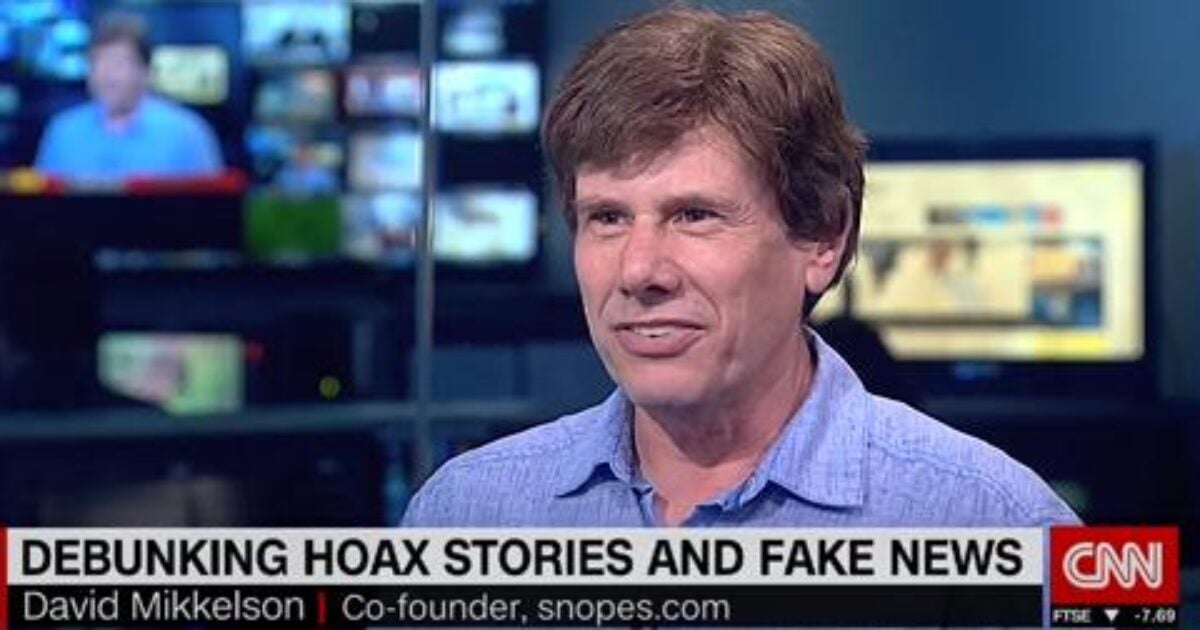 Friday was an extremely bad day for “fact-checkers” everywhere, as one of the media’s most beloved “fact-checkers,” Snopes, was itself publicly fact-checked.

It was fact-checked by BuzzFeed News, which published findings of an investigation showing that Snopes’ head honcho, co-founder David Mikkelson, is a “troll” who’s been blatantly lying to the site’s “millions of readers” about a variety of topics.

“Mikkelson … has long presented himself as the arbiter of truth online, a bulwark in the fight against rumors and fake news. But he has been lying to the site’s tens of millions of readers,” BuzzFeed News reported.

Though not mentioned by BuzzFeed, the site in general also has a track record for extreme left-wing bias — as, in fact, do virtually all mainstream “fact-checkers“:

“A BuzzFeed News investigation has found that between 2015 and 2019, Mikkelson wrote and published dozens of articles containing material plagiarized from news outlets such as the Guardian and the LA Times,” BuzzFeed continued.

The investigation, which was conducted quietly with help from other Snopes’ officials, found 54 articles from Mikkelson containing plagiarized material from outlets including but not limited to The Guardian and the Los Angeles Times.

These findings have led to Mikkelson being suspended from editorial duties pending “a comprehensive internal investigation” and his stories being tagged for removal, according to a joint statement from two other top Snopes officials.

“Our internal research so far has found a total of 54 stories Mikkelson published that used appropriated material. … Let us be clear: Plagiarism undermines our mission and values, full stop. It has no place in any context within this organization,” they said.

“We are in the process of archiving and retracting all of the offending stories, along with disabling any monetization features on those posts. We will attempt to contact each news outlet whose reporting we appropriated to issue an apology,”  they added.

However, it appears only the stories containing “appropriated material” are being removed. Plenty of others still remain published despite Mikkelson’s sketchy habits.

According to BuzzFeed, during the 2016 election he frequently wrote articles under the pseudonym Jeff Zarronandia. His profile on Muck Rack, a tool used to track journalists, shows that some of these articles pertained to then-GOP candidate and later nominee Donald Trump and his supporters:

Why an alias? According to BuzzFeed, it was because he’s a longtime known troll who’s displayed a “penchant for trolling” since at least the 1990s.

“At that time, he was so strongly associated with trolling — even tricking advice columnist Ann Landers into running several prank letters — that the practice was sometimes referred to as ‘snoping,'” according to BuzzFeed.

“Similar pranks and allusions to trolling are littered throughout Snopes’ site. For example, a section called ‘The Repository of Lost Legends,’ which forms the acronym ‘TROLL,’ contains spoof fact-checks with titles like ‘Mister Ed was a Zebra.'”

Moreover, the ridiculous articles written by Mikkelson — some under his real name — appear to still be live.

The article above even references a “nonexistent tech columnist” named Lisa Birgit Holst, according to BuzzFeed.

The name is reportedly an anagram for “this is a big troll.”

Asked to explain himself, Mikkelson told BuzzFeed he’d just been trying to melt away stress.

“It was kind of a stress-relief thing [after] spending 20 years seeing people trying to discredit our work by just making stuff up about us. Let’s have some fun and watch these people vent their spleen inventing reasons why this nonexistent persona is biased,” he said.

But as noted by BuzzFeed, “Knowingly misleading readers by using a fake name is considered unethical for many news outlets — especially one that markets itself as a bulwark of truth and transparency.”

These findings have not come as a surprise to conservatives, who’ve been keenly aware of Snopes’ shady habits for years thanks to the site frequently “fact-checking” their otherwise perfectly accurate content.

Not surprised. Snopes is propaganda as are others.

The latest fad is to create a “fact-checking” service when in fact they simply spin a narrative.

It might not violate copyright, but it’s definitely a form of plagiarism to rewrite an article and not give credit to the source

“Fact-checkers” are, of course, not fact-checkers at all. They’re propagandists and narrative-shapers.

The fact that someone at Snopes is dishonest should come as a surprise to no one. https://t.co/yga8jQzYWg

Snopes even has a history of targeting conservative satirists, while of course leaving liberal satirists like those at The Onion alone.

As of mid-August 2021, Snopes’ site contained dozens upon dozens of unnecessary “fact-checks” of The Babylon Bee’s obvious satire.

In an op-ed for The Wall Street Journal published in 2019, the Bee’s editor in chief, Kyle Mann, further noted that Snopes only “fact-checks” stories that poke fun at the left.

“They don’t seem to have a problem when we make fun of Trump-worship, conservatives, fundamentalism and megachurches. But when we target Democrats and the left, suddenly we’re branded liars,” he wrote.

Yet in a stunning twist of irony (and perhaps karma), it’s now been discovered without a shadow of a doubt that the real liars are those at Snopes.