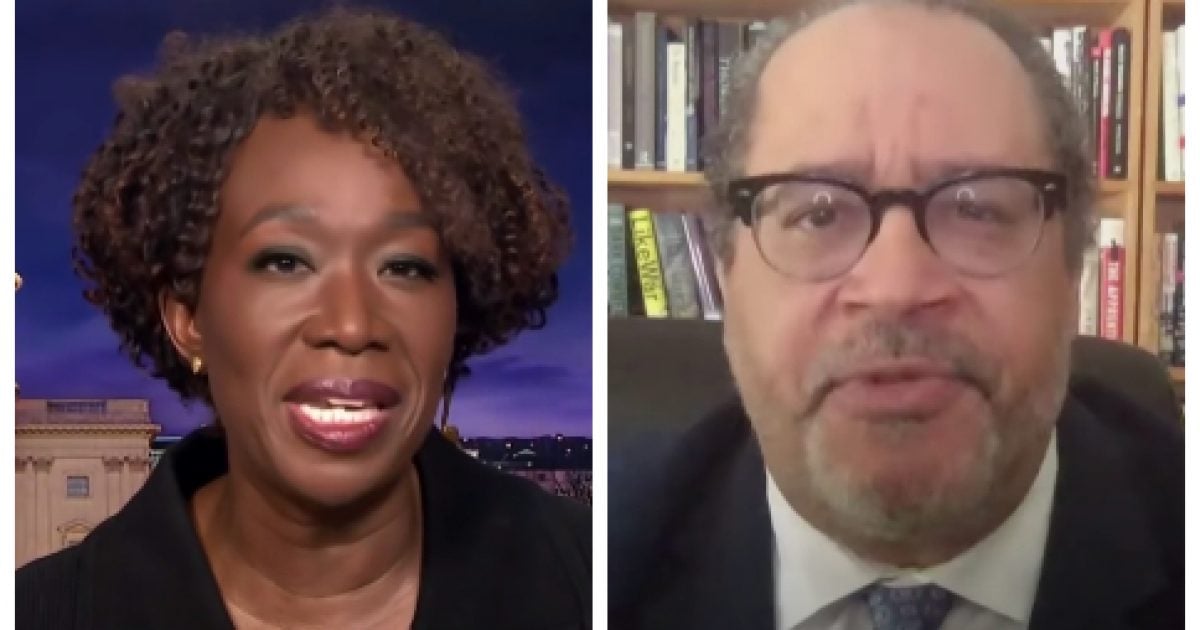 Left-wing bomb-thrower Michael Eric Dyson lashed out at Republicans during a Friday evening segment on MSNBC host Joy Reid’s show with a bizarre claim that they would support legislation to prevent Jesus from being given a drink of water while dying on the cross.

As the segment was ending, Reid asked Dyson, an ordained minister, and professor at Vanderbilt University, about a recent White House meeting and whether President Joe Biden supported the thin Democrat majority’s push to end the filibuster so the party can ram through highly controversial legislation.

“I think he’s contemplating it seriously when he sees the consequences,” Dyson said. “What he needs to do is fill these busters with some fear of the government. These are the kind of people that would pass a law to keep Jesus from getting a cup of water while he’s dying on the cross.”

My unapologetically dramatic comments meant to bring down a hammer on the vicious anti- democratic GA Republicans: “These are the kind of people who would pass a law to keep Jesus from getting a cup of water while he’s dying on the Cross.” ⁦@JoyAnnReid⁩ ⁦@thereidout⁩ pic.twitter.com/1bsPiFvgKH

Dyson noted in a tweet accompanying the clip of his comments that they were largely directed at Georgia Republicans who just passed a voter ID law in response to widespread concerns from constituents about fraud during the last election.

“My unapologetically dramatic comments meant to bring down a hammer on the vicious anti-democratic GA Republicans,” he added.

Appearing on Friday’s The ReidOut, Vanderbilt University professor and former MSNBC political analyst Michael Eric Dyson treated viewers to the kind of venomous trash talk that apparently qualifies as political analysis that said America suffers from an idolatry to whiteness and claimed that the GOP would have barred Jesus from being given a cup of water while he was dying on the cross.

Reid asked Dyson earlier in the segment to respond to the new Georgia law, to which he said it must be viewed through a lens of “Jim Crow-ology.” That is necessary, he argued, to understand that white male Georgia Republicans see the civil rights-era Voting Rights Act as “merely an inconvenient interruption of white supremacist power.”

He also said that in their “white imagination,” they believe that blacks will lose their will “to exercise the franchise” of voting.

“And I end by saying this: Brian Kemp and Raffensberger and those, that crew, you fought against, you know, Donald Trump — you wanted to get back in his good graces — so, as you pointed out paradoxically, you undermine the very ostensible legitimacy you possess to defend yourself against him now to hand him the plate,” he claimed

“The real religion — the real politics in America is whiteness and whiteness unhinged,” Dyson added.

Georgia Gov. Brian Kemp has pushed back against the allegations, saying in a statement over the weekend that critics of the bill obviously haven’t read it, noting there is nothing in the legislation that prohibits any state resident who can vote from doing so.

“It is obvious that neither President Biden nor his handlers have actually read SB 202, which I signed into law yesterday,” he said Saturday in pushback from the president himself, who has also likened the legislation to “Jim Crow.”

“There is nothing ‘Jim Crow’ about requiring a photo or state-issued ID to vote by absentee ballot – every Georgia voter must already do so when voting in-person,” Kemp added. “President Biden, the left, and the national media are determined to destroy the sanctity and security of the ballot box.”