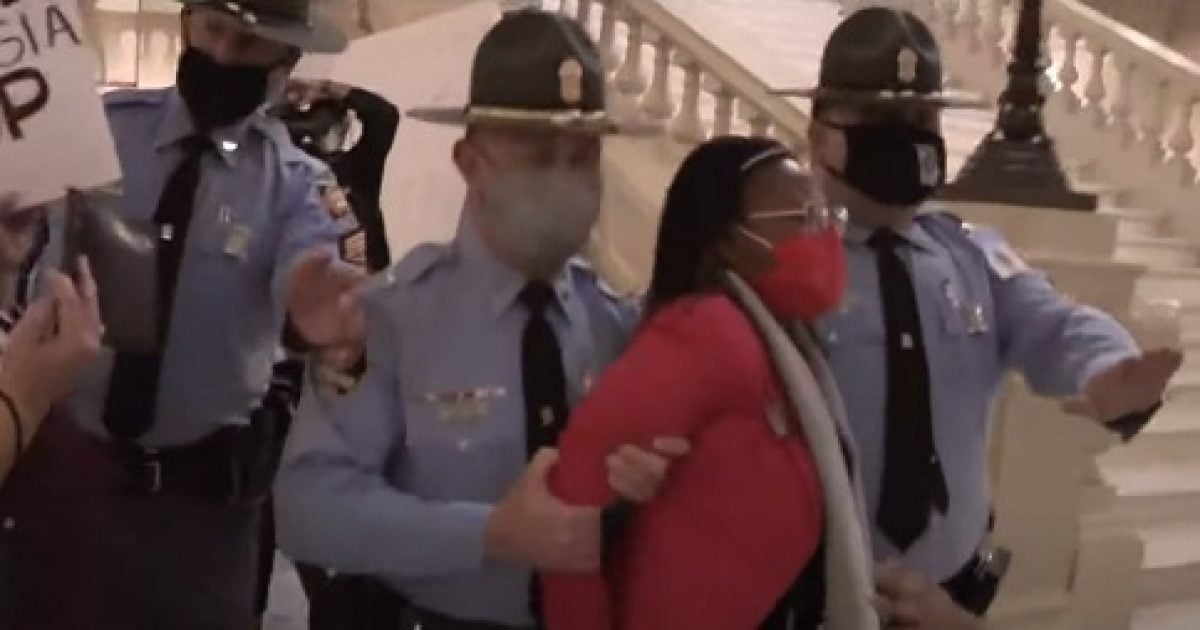 The new law imposes voter identification requirements to vote by mail, limits voter drop boxes and allows the state to take over local elections or remove local elections officials if there’s a determined need to intervene, according to the Atlanta Journal-Constitution.

The Republican-run state found itself at the center of controversy swirling around the 2020 election, and it’s likely the results would have been very different had they taken action to ensure voting integrity ahead of that election — President Joe Biden won Georgia by roughly 12,000 votes, the first Democrat to do so in nearly 30 years.

Kemp, a Republican, signed the bill into law and was in the middle of a livestream event when Georgia Democratic state Rep. Park Cannon appeared outside his office and began banging on the door.

Crying “Jim Crow 2.0,” Democrats pushed the myth that the efforts to shore up voter integrity was voter suppression, a mistruth readily repeated by many in the media, and Cannon was set on interrupting the governor with her misguided, politically motivated take on the bill.

“Why are you arresting her?” This Facebook Live video from @TWareStevens shows the moment authorities detained state Rep. Park Cannon as @GovKemp was behind those doors signing elections restrictions into law. #gapol pic.twitter.com/U1xMJ6tZrY

Civil disobedience and outright disruption of the governmental process is the go-to tactic of today’s hard-left Democrats who understand that mail-in voting was the key to electing Biden. The pandemic was used as an excuse to mail out millions of unsolicited ballots, with little regard to chain of custody integrity.

“She was instructed that no one was in the front office and to stop beating on the door,” troopers wrote in a statement after the arrest, according to FOX 5 of Atlanta.

Cannon was removed from the building by state troopers and booked into the Fulton County jail on charges of obstruction of law enforcement, and preventing or disrupting General Assembly sessions or other meetings, the Fox affiliate reported.

Oh, by the way, Cannon’s arrest was also Jim Crow.

This is insane: Georgia Dem rep @Cannonfor58 was arrested for trying to watch Brian Kemp sign new voter suppression bill. Look at how she is treated by police. This is straight out of Jim Crow pic.twitter.com/zRpMWumbkQ

There was plenty of media focus on the dog-eared allegations of voter suppression.

MSNBC host Rachel Maddow being a prime example of the propaganda inundating the airwaves.

“The Republican governor of Georgia, Brian Kemp, has signed into law a sweeping, staggering bill that undoes much of what constitutes free and fair elections in the state of Georgia,” Maddow seethed. “It will actively prevent people from accessing their constitutional right to vote in a way that will disproportionately affect poor Americans and — and Americans of color.”

Of course, this is her opinion and does not align with reality, but the left is famous for not allowing facts to get in the way of a good narrative.

How such dishonesty is allowed on the airwaves is quite remarkable and likely accounts for the legions of uninformed people in America. But Maddow wasn’t done. The MSNBC host then linked the efforts in Georgia to former President Donald Trump — more of the Orange Man Bad strategy.

“And the voter-suppression elements of this Georgia law, that was, again, just signed tonight — it’s now Georgia law — the voter suppressive elements to make it harder to vote, those things have received a lot of attention,” Maddow said. “But here’s, maybe, the part that’s even worse. What this bill will also do is codify, into law, the process by which Donald Trump tried to undo the Georgia-election results in 2020.”

She railed about how the state legislature intervened here, never mind that it’s their job to do just that — one of the arguments put forth by the Trump campaign after the election was that in many states, lone officials changed voting laws that should have required legislative action.