Case in point: House Democrats reportedly intend to introduce a bill next week that would limit the term of all future Supreme Court justices to just 18 years, far short of the lifetime tenure guaranteed to them by the U.S. Constitution.

This effort is being spearheaded by California Rep. Ro Khanna, who published a screed Friday complaining about the disproportionate number of conservative-leaning justices on the high court. Apparently, liberal Supreme Court justice lives matter.

“Khanna’s legislation will eliminate the arbitrary nature of Supreme Court vacancies by creating a regular, fair process that doesn’t reshape the Court for decades at a time.”

But it will do so not only in violation of the Constitution, but also in contravention of the long-maintained (though admittedly not set in concrete) thesis that SCOTUS term limits can only be imposed through a constitutional amendment.

“Article III of the Constitution gives Congress broad authority to regulate the federal judiciary, but it also provides that federal judges will serve during ‘good behavior.’ This phrase is widely read as requiring life tenure, and scholars remain divided over whether Congress can limit that tenure via legislation alone,” SCOTUSblog notes.

In a video statement posted to Twitter on Friday, the California congressman claimed that the Founding Fathers had never intended for SCOTUS justices to stay on so long.

“Our Founders could never have dreamed that a justice would be making decisions on the court 40 years, 50 years after they were appointed. The idea that the framers had was that someone after a distinguished legal career would serve on the Supreme Court for their final few years of their professional career and render their wisdom and counsel to the nation. That has been totally perverted,” he said.

To all the Republicans who talk about term limits: Yes, I’m all in! We need term limits for the House, the Senate, and absolutely the Supreme Court. pic.twitter.com/zRdb5k7ALY

The center wrote that people such as Huckabee (and now Khanna) have “a perception of what the founding generation wanted regarding judicial tenure that seems to run counter to Article III and to the history of the founding years.”

“There is nothing in Article III, or in the impeachment provision, that supports the notion that ‘the nation’s founders never intended to create lifetime, irrevocable posts’ for Supreme Court Justices, or for other federal judges.”

Not surprisingly, when Huckabee made his remarks in 2015, the media rushed to dismiss them:

The Washington Post, 2015: “Mike Huckabee suggested term limits for the Supreme Court today. That’s not such a good idea.”

The Washington Post, 2020: “Judicial term limits are the best way to avoid all-out war over the Supreme Court”

The way Khanna’s proposal would work is that a president would be permitted to appoint a justice during his/her first and third year in office. The longest-serving member would then move “into senior status with limited duties.”

Every president gets an appointee in Year 1 and Year 3.

When the size of the Court exceeds 9, longest-serving member moves into senior status with limited duties.https://t.co/QzkR9f225D

The response to the congressman’s proposal has been divided.

On one hand, imposing term limits is far less radical than packing the court:

term limits on SCOTUS is a 1000x more reasonable idea than packing the court https://t.co/bLh8JQx5Rm

If every SCOTUS appointee had a set term and they were spaced out evenly then (most of the time) every president would get the same number of nominees. It’s never made a ton of sense to me why we’re fine with some presidents getting 5 and others getting 0 based on when ppl die.

I’m not sure I fully support the idea. Just don’t think it’s crazy in general — none of this is to endorse the Dem proposal as I don’t know any of the details.

But on the other hand, why should Supreme Court justices be beholden to term limits when members of Congress aren’t?

The Democrat politicians who are pushing for term limits on the Supreme Court,

So Democrats in House are preparing a bill limiting U.S. Supreme Court justice terms to 18 years.

Oh heck no. We need term limits for congress. These corrupt bootlickers use congress to get rich.

They need to go.

Perhaps what America needs are term limits for EVERYBODY, starting with 33-year congressional veteran Nancy Pelosi. 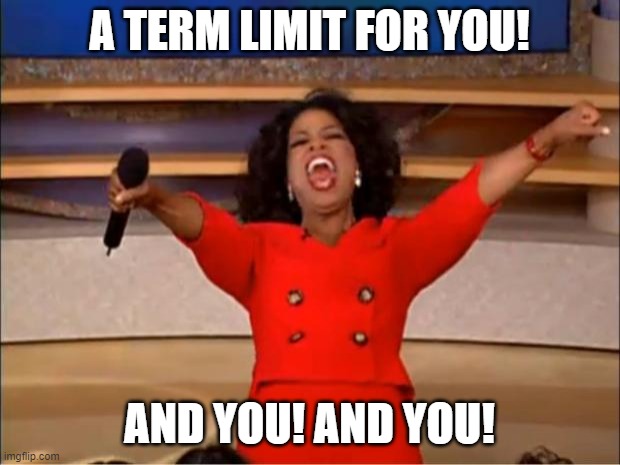