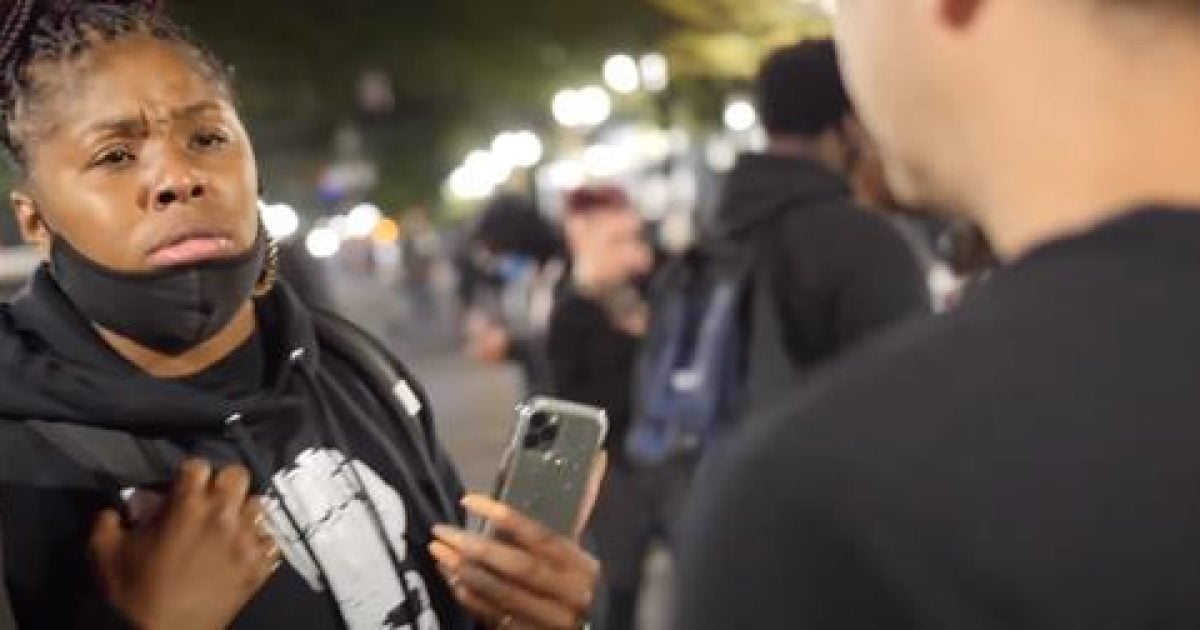 While Democrat politicians and media figures have sought to portray Portland’s rioters as “peaceful protesters,” a never-ending stream of constantly emerging evidence shows that’s a lie, including a new documentary brief from Ami Horowitz.

A veteran documentarian who’d previously exposed the truth about the migrant caravans that were headed to the southern U.S. border two years ago and the oblivious ignorance of white liberals, this time Horowitz embedded himself deep in Portland’s so-called “protests” to discover the truth about the left’s beloved “peaceful protesters.”

Watch what he discovered below (*Graphic content and language):

As documented by Horowitz, the left’s “peaceful protesters” were seen by him using pipes, hammers and golf clubs to attack the federal courthouse in Portland, and using incendiary devices in the hopes of burning the building and its occupants.

Meanwhile, the documentarian didn’t observe a single so-called “peaceful protester” discourage the rabid rioters “from what they were doing,” which included throwing a gas canister at him and threatening “street justice” if he exposed their violence.

As for the federal troops stationed in Portland whom Democrat political leaders have tried to smear as “stormtroopers,” according to Horowitz they only stepped out of the federal courthouse when it was on the verge of catching on fire.

Once outside, they tried to extinguish the threat “as humanely as possible using tear gas, pepper spray and other non-lethal means, even after they were attacked with glass bottles and rocks” by the left’s “peaceful protesters,” according to Horowitz.

While their behavior was abhorrent, their rhetoric was arguably worse.

“In the words of the protesters that I spoke to, the goal of these protests is to encourage societal breakdown so that it could be rebuilt in their own warped image,” Horowitz explained.

Below are some of the most insidious statements made by them:

When asked specifically whether it’s time to end the American expert, nearly every “protester” Horowitz spoke with eagerly replied with a resounding “yes.”

Perhaps the most insidious, ominous and evil remarks uttered were these: “This is us creating the high road. This is us not creating groups to kill off and assassinate the people that are doing the same to us. This is us just trying to create a world filled with love and kill off the hate.”

Just like the hateful people who chant “love trumps hate,” the woman who made these remarks clearly has no idea what it means to be loving. None whatsoever.

The response from most of the “peaceful protesters” completely contradicts the narrative that so many on the left, including Portland Mayor Ted Wheeler, have tried to convey. Even as recently as Friday, four days after the publication of Horowitz’ documentary, Wheeler could still be seen defending the “peaceful demonstrations.”

Last night, Portlanders committed to peaceful demonstrations amplified their energy, asserted their collective voice and reclaimed the space that has been a staging ground for violence, to share their powerful message of reformative justice. Thank you!

What he wrote was a flat-out lie that’s so easily debunked by an abundance of video clips recorded both Thursday night then later Friday night.

See some of the evidence below:

Antifa protesters dumped a bloody severed pig’s head on an American flag outside the Justice Center in downtown Portland. They put a cop’s hat on it and set all of it on fire. #PortlandRiots #antifa pic.twitter.com/qfAOT4ItxP

Last night was not the first time a severed pig’s head was used as a threat to law enforcement in Portland. In the early weeks of the riots, a burnt pig’s head was left at the base of the now-gone elk statue. This was long before federal agents showed up outside the courthouse. pic.twitter.com/uzgeOjo46X

Antifa are already getting an early start on vandalism tonight in Portland. Video by @FromKalen. #PortlandRiots #antifa pic.twitter.com/PYQpSi2lTk

Rioter tries to aim rocket at the Portland federal courthouse but it misfires on him, burning his hand. Video by @livesmattershow. #PortlandRiots #antifa pic.twitter.com/XskvfH2S6n

Black bloc militants in downtown Portland are trying to break into a business near the federal courthouse at the peaceful protest. They’re prying off the wood that is covering glass windows. #PortlandRiots #antifa pic.twitter.com/7pjwIHUQDP

Rioters at gathering in Portland are tearing off barricades of an arcade nearby federal courthouse. Portland Police are aware but will let them continue because they’re given directive to leave rioters alone in most circumstances. Vid by @livesmattershow. pic.twitter.com/hdL2ix27rF

Yet no matter how much evidence is presented, left-wingers like Wheeler continue stubbornly clinging to their false narrative.

During his operation in Portland, Horowitz did manage to stumble on one lone man who was interested in genuine Black Lives Matter protests, not riots and anarchy, and who understood that the federal officers defending the courthouse were just doing their jobs.

“What you gonna do if you’re 90 years old and you’re out there going ‘la, la, la,’ and then you throw a bomb, some kid throws a bomb in there trying to be cute? And when they come out, and they’re pissed, and then people say, ‘Look and see what they did!’ No, bro! They didn’t do nothing! They’re guarding their dwelling!”