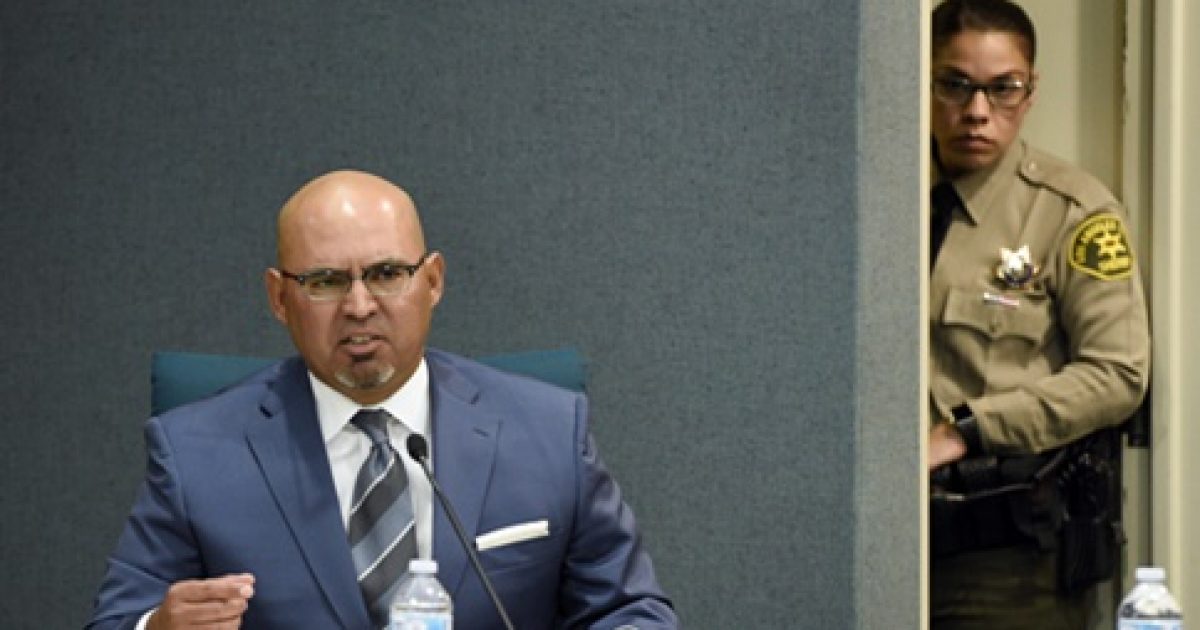 On Tuesday night, city council members in the Los Angeles suburb of Pico Rivera passed a resolution condemning and asking for the resignation of Gregory Salcido, a Democratic councilman and high school teacher who was caught making derogatory remarks about members of the US military in a video that went viral last month.

Salcido, a history teacher, has been on leave from El Rancho High School in Pico Rivera since the video came to light, the Associated Press reported.

In the footage, Salcido was heard criticizing a student for wearing a Marine Corps. sweatshirt and urging his students not to join the armed forces:

At Tuesday night’s city council meeting, nearly 50 residents of Pico Rivera berated Salcido and demanded he step down from the lawmaking body.

Dennis Jackson, who grew up in the town, said “A classroom is a place of learning, not propaganda.”

Eric Gleason, a 20-year-old former student of Salcido’s, came to the teacher’s defense.

“I believe that I probably wouldn’t even be here today if it wasn’t for him,” he said.

Salcido defended his controversial comments, saying his goal was to motivate students to go to college and claiming his words “were definitely out of context.”

He claimed he would “sleep good tonight” and said he has no plans to resign.

#GregorySalcido speaking after #PicoRivera City Council votes on censuring him and asking for his resignation.Nearly 300 in attendance. 55 spoke on his anti-military comments. pic.twitter.com/MCP4CYlxH9

Mayor Gustavo Camacho called Salcido’s rant “bullying, arrogant and aggressive behavior.” He introduced the resolution, which passed with the support of three other council members.

Salcido voted against the measure. A fifth councilman abstained, saying the move was pointless because the council does not legally have the authority to force Salcido to resign.

Even if the beleaguered teacher does not step down, the censure will bar him from city committees and appointments.

“I think the guy ought to go to hell,” he said. “I hope he enjoys the liberties and the lifestyle that we have fought for.”

Many Twitter users continued to blast the history teacher.

He’s a disgrace, he obviously knows nothing about the Armed Forces of the United States. He needs to resign.

This man is disgusting and has no business being an educator.

Quite possibly the most dishonorable and pathetic displays I’ve ever seen. I actually feel bad for this clown’s family and the City of Pico

He should not be teaching. The swearing alone is offensive. NO child should be subjected to the political beliefs of a public school teacher, abuse of influence.

He claims his goal was to do everything to get his students to college. Yeah, a lifetime of student loans is much better than a distinctive military career in say, the nuclear sub program. He should have foregone teaching for the military.

And in California, he has a job for life! The things that COULD get him fired are too ugly to list here!