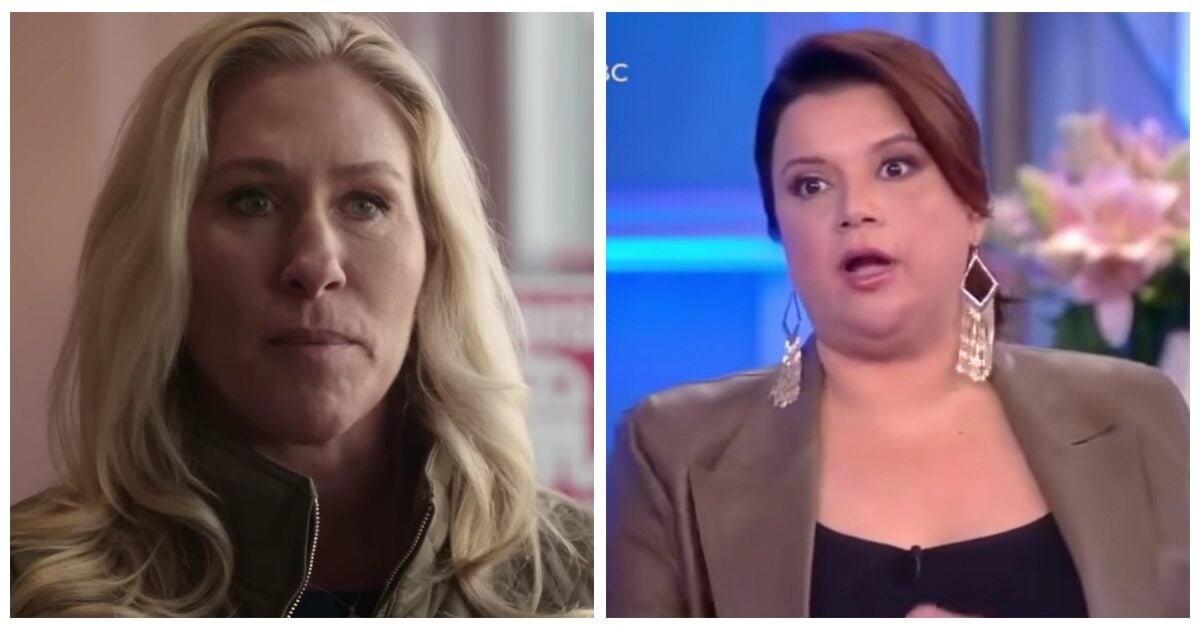 Obsessive Never Trumper Ana Navarro seems to be trying to hair-shame U.S. Rep. Marjorie Taylor Green (R-Ga.), and it’s not going well for her on Twitter.

Reacting to a video of outspoken and sometimes controversial MAGA/America First stalwart MTG marching in a a local parade, Navarro somehow concluded that it was clever, rather than catty, to write the following to her nearly two million followers on the platform:

“Does nobody tell her she needs to trim her split-ends? Really.”

No stranger to pettiness, it perhaps comes as no surprise that “The View” Mean Girl co-host, who does double-duty on fake news CNN spewing Republican-bashing talking points, is taking cheap shots at MTG.

Does nobody tell her she needs to trim her split-ends? Really. https://t.co/FjhpKfRS5A

Twitter has decided, however, that she is hardly the type of person who is qualified to question someone else’s countenance.

And by the way, isn’t lookism or body shaming forbidden by liberals?

With political science and law degrees, moreover, it’s unclear if Navarro has received training or obtained credentials as a hair stylist or beautician.

Parenthetically, assuming we want to go there (and many on social media are), mom-of-three MTG, 48, like her or not, is one of the most physically fit members of Congress.

In contrast, Navarro, 50, has admitted on national TV that “I’ve been fat my entire life.”

As part of her analytical track record, Navarro is the same so-called strategist who recently lamented the issues-oriented GOP trend in the Hispanic community and, while sounding like an election denier, bemoaned Fla. Gov Ron DeSantis easily winning a second term.

Navarro has a sad tendency to politicize just about everything.

U.S. Rep. Greene was overwhelmingly reelected to her northwest Georgia House seat on November 8 with nearly 66 percent of the vote.

As alluded to above, many Twitter users, including those on the left, are implying that Ana Navarro has metaphorically wigged out.

Here is just a sample:

Judging women on their appearance?

It’s a type of talent that you can go after someone as godawful as MTG and still seem worse.

I’ve not been a fan of MTG either, but there is absolutely no reason to look-shame. A wise woman ( @MichelleObama ) once said, “when they go low, we go high”. Let’s always strive to be as classy as she, Ana. Do better.

Have you looked at yourself in the mirror?
Do you have friends?

Ana, sincerely, with Covid, you should really look at a weight loss regimen. Not being mean, just concerned about your health. MTG can always go to the stylist tomorrow, but being obese can be deadly.

Petty heffa…way to advance the cause of women by acting like an insecure 7th grader. You are insufferable and a terrible representative of womanhood.

It is sooo gross to see a female attacking a powerful woman, bc hair.
Sickening and internalized misogyny!

No mirrors in Anna’s house

Has anybody told you that you need to lose weight because you definitely do. Id rather have split ends then be obese which leads to diabetes and other serious health issues

She can get those cut in about five seconds and then, guess what, you’ll still be fat.

You typed this with one hand while eating a 5th jelly donut with the other, didn’t you?

Why is it the women you despise you always have to go after their looks? You may act secure w/who you are but in reality you have some MAJOR insecurity issues.