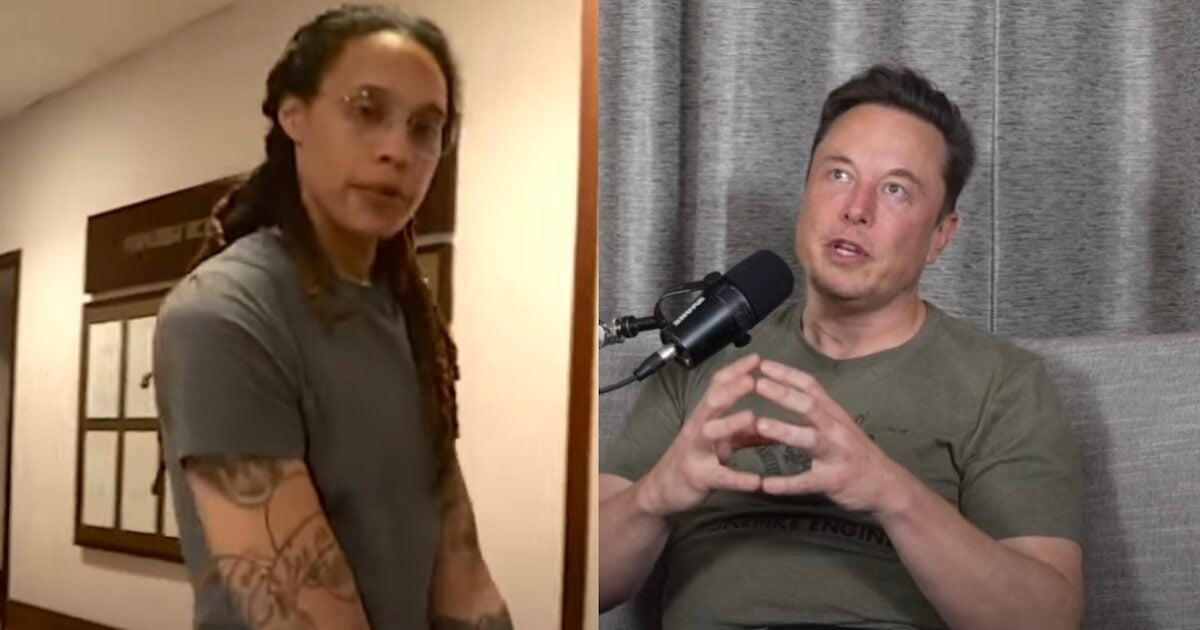 WNBA player Brittney Griner was sentenced to more than nine years in a Russian prison after a judge found her guilty of smuggling drugs into their nation and, while President Joe Biden’s administration is seemingly moving heaven and earth to free her from incarceration, billionaire Elon Musk wondered openly at the president’s hypocrisy.

Thursday the Tesla CEO joined the “Full Send” podcast to discuss a whole host of issues and when the effort to free Griner was raised, the “free speech absolutist” did not shy away from calling out the obvious distinction in applying justice that Biden was drawing.

“If the president is working so hard to free someone who is in jail in Russia for some weed,” Musk presented matter-of-factly, “shouldn’t we free people in America?”

Amidst chatter from the group he continued, “There are people in jail in America for the same stuff. Shouldn’t we free them too?”

“My opinion is that people should not be in jail for non-violent drug crimes,” the entrepreneur stated.

Musk isn’t alone in his view that the administration is being more than a tad hypocritical on this matter because of the “high profile” nature of Griner’s conviction. Vice President Kamala Harris had reacted to the announcement that the basketball player would be facing nearly a decade behind bars for illegally transporting cannabis by tweeting, “With today’s sentencing, Russia continues its wrongful detention of Brittney Griner. She should be released immediately. [Biden] and I, and our entire Administration, are working every day to reunite Brittney, as well as Paul Whelan, with loved ones who miss each of them dearly.”

As was laid out, while Harris served as attorney general of California, at least 1,560 people were sent to prison on marijuana-related offenses between 2011 and 2016, and she herself had laughed as a response when asked if she had ever smoked marijuana. Furthermore, according to the ACLU, there were nearly 700,000 marijuana-related arrests in 2018 accounting for more than 40 percent of all drug arrests.

Meanwhile, Whelan who was arrested in 2018 on espionage charges before being convicted in 2020 and sentenced to 16 years in prison has openly petitioned for Biden to aid him, but was treated like an afterthought to Griner.

Biden, who issued a statement in a similar vein to Harris, reiterated Friday when asked about a potential exchange for the release of Griner: “I’m hopeful. We’re working hard.” The expected trade has been reported to include Viktor Bout, the so-called Merchant of Death, who is serving a 25-year sentence in a U.S. prison after a 2011 conviction of conspiracy to kill Americans and aiding a terrorist organization as well as conspiracy to deliver anti-aircraft missiles.

Musk later clarified his own position on recreational drug use and said, despite having partook while on Joe Rogan’s podcast, he is not a regular drug user.

“I find weed’s not that good for productivity,” he said. “I do actually have to make the rockets work and the cars work and make the factories work.”

On the backlash from his behavior on Rogan’s show, Musk explained, “The consequences for me and for SpaceX were not good. Because it’s still federally illegal. It was pretty nutty, actually, because I had to have random drug tests and stuff after that to prove I’m not a drug addict.”

This ultimately led to further scrutiny of his employees as well, and the CEO apologized stating, “Sorry guys, I didn’t realize it’d be this big of a deal.”