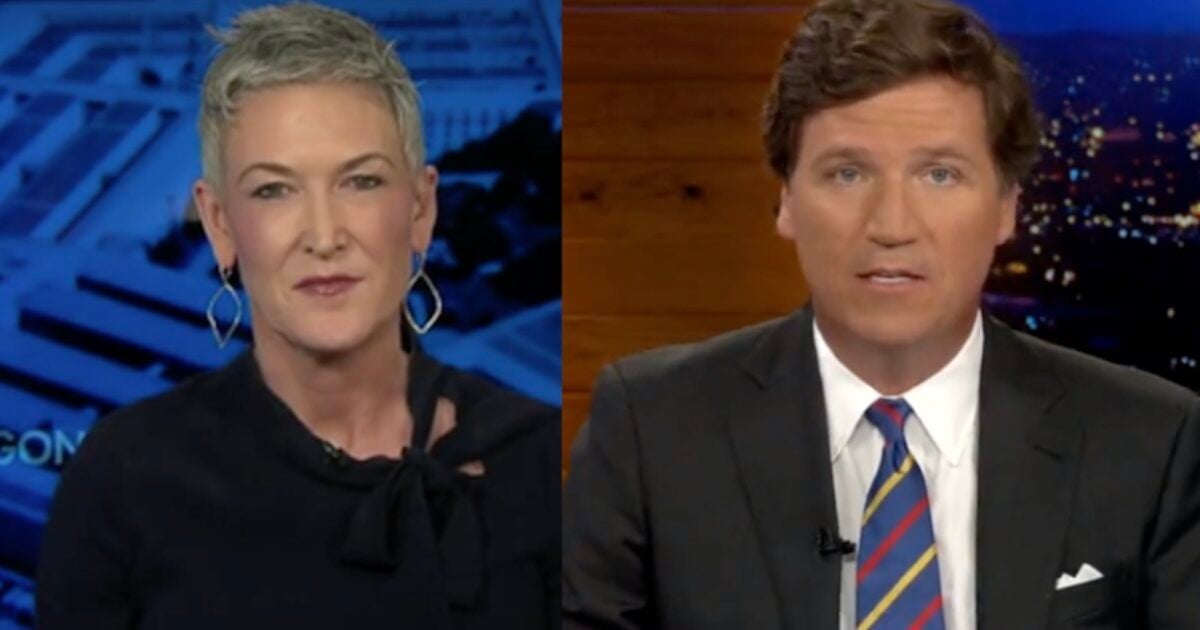 On the night of President Joe Biden’s first State of the Union address, Carlson began his Tuesday episode of “Tucker Carlson Tonight” by stating if Biden were honest, he would say the state of the union was fragile.

Citing the numerous issues plaguing the nation, Carlson pointed out that Americans were united in their disdain for Biden’s performance as president and that the only way to move past that would be to focus on the war in Ukraine. To that, Carlson cautioned about believing everything you hear.

“Vladimir Putin is the one who is brain damaged,” Carlson said, “the CIA can prove it. We’re about to hear a lot of that. How much of it can you believe?”

This war is a humanitarian tragedy. It’s also a political event that various groups, including in this country, are leveraging in the hope of gaining more power for themselves. pic.twitter.com/6icGvnuYhe

Carlson reminded that some of the news is true. Putin did invade Ukraine. That is bad and the destabilization could lead to a larger conflict with Russia. Carlson added, “That would be a legitimate disaster no matter what the outcome might be.”

Urging caution on further details, Carlson warned, “There is an awful lot of lying going on. An unprecedented amount of lying.” With a great deal of power on the line, Carlson suggested that political players would be leveraging the crisis to their own benefit.

“To gain that power they are manipulating you, the consumer of news,” through insidious and immoral means, Carlson explained. Intelligence agencies and tech monopolies are curating the information that is available for public consumption and while “some of that information is entirely real, some of it is fake.”

“How do you know when you are being manipulated, as you certainly are?” Carlson asked before turning to his guest, the recently dressed-down Macgregor.

The implication seemed clear to many.

On “Sunday Night in America with Trey Gowdy,” Macgregor offered his opinion on the Russian invasion. He believes that the Ukrainian resistance is at an end and that Putin will broker for control of eastern Ukraine to remain in his control and that the rest of the nation remains a neutral entity distant from NATO involvement.

Fox News national security correspondent, Jennifer Griffin, called Macgregor’s statements “distortions” and accused him of “talking about the west and NATO vilifying Putin and sounding like an apologist for Putin.”

“I don’t think anyone that I’ve spoken to here at the Pentagon,” Griffin said, “or elsewhere in western intelligence believes they know how far Putin wants to go.”

Neither Carlson nor Macgregor mentioned Griffin or her debasement of the Colonel Sunday, but she is a reporter at the Pentagon like the secret flak, “so-called reporters” Carlson alluded to. Carlson suggested that Macgregor is a voice to be trusted. All other conclusions draw themselves.

Tucker Carlson just absolutely destroyed his whining, out of control, pissy colleague Jennifer Griffin as a “reporter angling for a job at the Pentagon” 😂 😂 🤣

Holy shit tucker just declared war in Jennifer Griffin. Without using her name, called her a flak for the Secretary of Defense and the Pentagon (she’s the Pentagon correspondent)