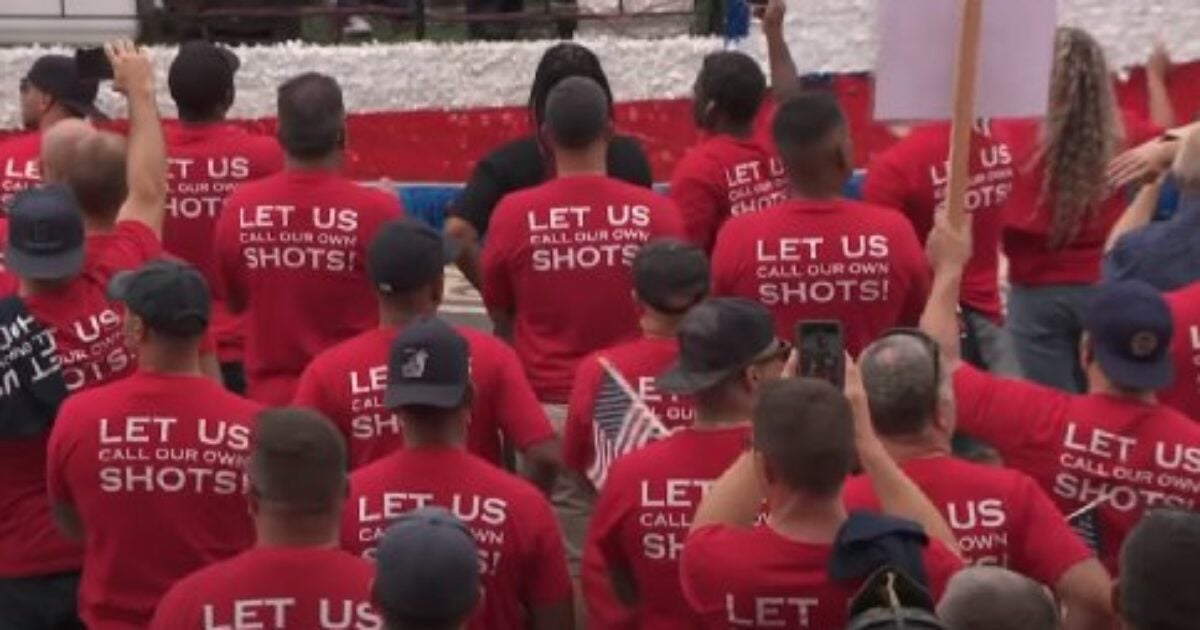 Liberal media outlet Salon is all for COVID vaccine mandates and in fact, wants to weaponize them to teach “Trump fans” a lesson by firing them if they refuse to get vaccinated.

Salon author Amanda Marcotte didn’t hold back in her disdain for conservatives and Trump supporters, “Staffing shortages are a pain, especially during a pandemic, no doubt. But staffing shortages are a minor issue compared to the damage being caused by the unchecked spread of COVID-19, which is increasingly due to one cause: right-wingers who have made refusal to get vaccinated a culture war and identity politics issue.”

“Unless such folks start tasting real consequences for their behavior, the U.S. is going to see another dark winter, as the virus continues to wreak havoc on our economy and health care system. Putting up with staffing shortages is a small price to pay to make sure that Trumpers — a class of people clearly unused to the idea that actions have consequences — actually start feeling real pressure to get vaccinated,” she asserted.

“There’s a lot of reasons conservatives cite for this refusal to vaccinate, though ultimately it all boils down to a desire to ‘own the liberals.’ But a lot of this pettiness is intertwined with a right-wing bravado. To be blunt, white privilege has long shielded many conservatives from the concept of facing consequences for their actions,” Marcotte continued.

It's time to start firing unvaccinated people: Trump fans are overdue for a lesson in consequences https://t.co/l0K7pLo9N1

“We see this in a lot of obnoxious right-wing behavior lately, from tantrums over COVID-19 mitigation measures in public places to the attempted insurrection on January 6. Who can forget how many of the arrested Trump supporters expressed genuine shock that they might actually face a legal consequence for participating in a violent effort to overthrow democracy?” the author stated once again weaponizing Jan. 6 to blame Trump supporters for everything bad.

“This lack of familiarity with consequences is likely why there are so many holdouts, even in the face of vaccine mandates. Bluntly put, a lot of them probably don’t think that leaders are serious about these threats to fire them, and won’t believe it until it happens. As with the Capitol rioters, there’s a persistent disbelief on the right that they will ever face real consequences for their bad actions,” she posited.

“The problem with highlighting COVID-19 deaths to scare the Trumpers straight, however, is that they can always tell themselves that they’re not going to be the ones who die since 98.4% of people in the U.S. do survive,” Marcotte contends.

“That’s precisely why vaccine mandates are so important. The absolute certainty of losing a job is going to motivate a lot more people than the more abstract risk of dying of COVID-19,” she stated endorsing outright threatening Americans’ livelihoods unless they submit to the will of the state over vaccines.

She capped off her full support of draconian enforcement of vaccinations by saying, “But for that threat to become real, well, it has to be real. This means that it’s not enough to threaten to fire people who won’t get vaccinated. Employers and governments have to follow through.”

“Threats cannot be empty, especially when facing stubborn people who believe themselves impervious to consequences. Threats need to be backed up with action. It’s time to start firing the unvaccinated,” Marcotte concluded.

Despite the fact that people of every political persuasion across the United States have refused to get vaccinated, Salon took the opportunity to blame those who support former President Trump for the spread of the virus.

The article also doesn’t take into account that many black Americans are refusing to get vaccinated and that these firings will disproportionately impact them economically.

Many are now being fired across the nation for not getting vaccinated. United Airlines is canning almost 600 employees. Nurses are being targeted as well as police officers and firefighters. The latest to face termination are border agents.

Americans are getting progressively angrier over forced vaccination and many are not fans of Salon either. Their tweet earned what’s called a sizable ‘ratio’ of backlash: (** Language warning)

Not surprising since Salon was telling liberals to disown their own families if they voted for Trump back in 2017. Liberals are just slightly better mannered fascists, that's all. pic.twitter.com/xuMugFtaN5

How did the absolute LIE that Trump supporters are the most unvaccinated population even start?

Calling anyone who disagrees with their politics "Trump fans."

Is @Salon suggesting that more than 7/10 black New Yorkers are Trump supporters?

Ummm. Trump fans are not the only ones who are resistant to the COVID vaccine. Have you looked at the proportion of BIPOC that are vaccinated? You cool with firing BIPOC?

By Trump fans do you also mean black people? Because a lot of black people don’t trust the government either and aren’t getting the shot. So you want all those people to go hungry? Shame!

I’m old enough to remember when Trump mentioned vaccines, leftists nationwide including Biden and Harris were unanimous in denouncing it saying they wouldn’t take it.. so is this about safety or you guys just have a hateful vendetta against the President and fellow citizens? 🤔

Quite possibly the worst thing I’ve seen on Twitter today, and the competition is tough.