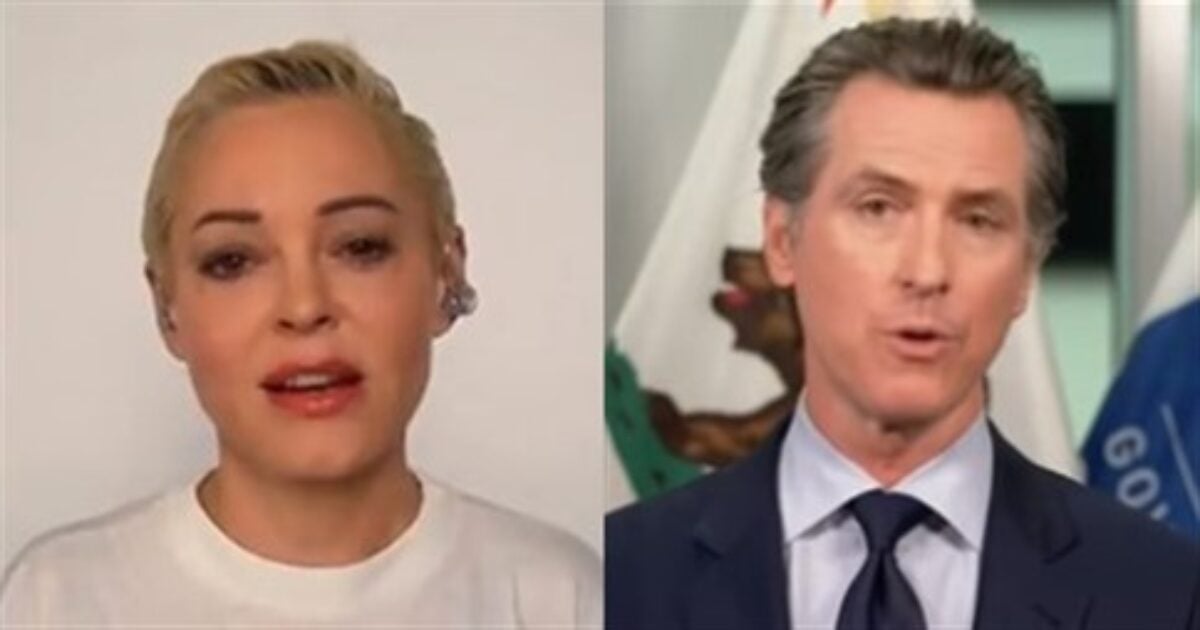 According to McGowan, Newsom’s wife, Jennifer Siebel Newsom attempted to bribe her into silence months before she went public with details about the abusive conduct of Weinstein, then a powerful Hollywood producer who had donated thousands to the campaigns of Democrats including Hillary Clinton.

She will join Republican gubernatorial candidate Larry Elder, who is hopeful of unseating Newsom, for a Sunday afternoon press conference where she will provide details on her claim that Mrs. Newsom sought to prevent her from speaking out against Weinstein, a late development that could influence voters before they go to the polls to render their verdict on the embattled Democrat.

Sunday @ 1pm, Rose McGowan and I holding a press conference. Rose will detail how Gavin Newsom’s wife, Jennifer, attempted to bribe and silence her from speaking out about Harvey Weinstein’s sexual abuses.

McGowan dropped her bombshell during an appearance on the Rubin Report last week.

“David Boies wants to know what it would take to make you happy…”@rosemcgowan tells me that Gavin Newsom’s wife Jennifer called her on behalf of Harvey Weinstein’s lawyer six months before the Weinstein scandal broke to make the story go away. pic.twitter.com/IG99Pb6tvl

The actress told host Dave Rubin, “She called me and she set up a meeting with me to meet her somewhere in Brentwood and I actually went, and I got very like creeped out and I saw her sitting where I was supposed to meet her,” she said, “and I looked at her and I turned around and went back into my car and drove away.”

“She wanted to meet me, she reached out to me,” McGowan said, adding “this was about six months before the New York Times article on Weinstein that I set up broke,” referring to the story that detailed the Hollywood powerbroker’s sexual degeneracy.

She continued, “She called me on behalf of a Theranos board member, the longtime lawyer of Hillary and Bill Clinton and Weinstein, one David Boies,” McGowan said, “So this woman I don’t know, some blonde lady with the last name Newsom, cold calls me and is like, David Boies wants to know what it would take to make you happy.”

"It's a double standard."@larryelder brings up allegations made by @rosemcgowan against Jennifer Newsom.

"I don't know if it's true…but if that allegation was made about my significant other…it would be all over the place….the mainstream media doesn't give a damn." pic.twitter.com/Nu7jfV5qf5

The news couldn’t come at a worse time for Newsom who has been in desperation mode for weeks as polls tighten and top Democrats including Joe Biden and Kamala Harris mount a furious effort to mobilize the base, a scandal of such magnitude could potentially swing sufficient public sentiment against him with little time to put together a public relations counteroffensive.

McGowan, who defied pressure by coming out against Weinstein was one of the inspirations of the #MeToo movement and received high praise, including from Time Magazine which included her with women who spoke out against sexual abuse as the 2017 person of the year.

She recently body-slammed Hillary Clinton, who was a Weinstein BFF before the gruesome truth emerged, as a “shadow leader in the service of evil,” adding that “I’ve been in a hotel room with your husband and here comes the bomb.”

@HillaryClinton You are a shadow leader in service of evil. You are the enemy of what is good, right and moral. You represent no flag, no country, no soul. You eat hope, you twist minds. I’ve been in a hotel room with your husband and here comes the bomb. https://t.co/K3ZDQYBXPn

There has been an eerie silence from Democrats and especially Newsom since McGowan’s account that she was bribed, a telling sign that he fears that she may be the one who pounds the nails into the coffin of his political career.