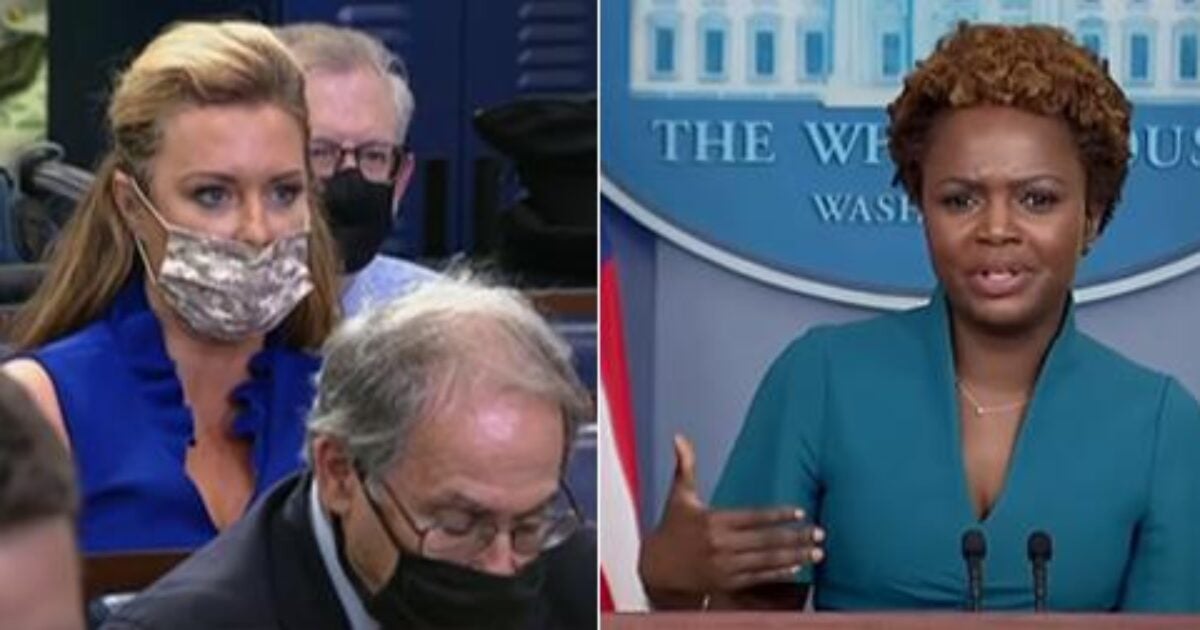 White House deputy press secretary Karine Jean-Pierre failed repeatedly on Friday to provide any direct answer when asked to explain how the determination is made that a particular strain of the coronavirus is the notorious delta variant.

As far as she was concerned, the “experts” have said that the current dominant strain is the delta variant, and what they say automatically goes, never mind their history this past year of constantly — CONSTANTLY — making false proclamations.

Jean-Pierre made the remarks after being pressed about the topic by Newsmax White House correspondent Emerald Robinson during that day’s White House briefing.

“Well, how do you test, when that is the dominant strain in the area — when people just test whether they’re COVID positive or …,” Robinson pressed.

Unconvinced, Robinson then asked whether the “experts” have ever explained their process for determining whether a particular strain is the delta variant.

“I don’t even understand, why would they explain?” the deputy press secretary promptly replied, completely flummoxed over why anyone would seek to think critically and ask tough questions instead of blindly accepting narratives.

Robinson responded by arguing that it was as if the deputy press secretary was saying such and such is the answer just “because they say so.”

“Well, they’re the experts. It’s not just ‘they.’ These are scientists. These are experts,” Jean-Pierre replied, reiterating her belief that the “experts” should be blindly trusted.

FYI, “experts” have a history of being wrong on many matters.

This is why normal people don’t blindly trust ‘experts’ pic.twitter.com/EyfXtk5rpR

This is why Americans don’t blindly trust medical/science experts asserting the science is settled on anything. pic.twitter.com/KjmMu42Bsm

Many of the great disasters of our
time have been committed by experts. pic.twitter.com/Wto2tYP9RJ

Robinson immediately tried to push back by noting that the “experts” have “contradicted” themselves numerous times, but before she could finish, Jean-Pierre launched into a lecture about CDC director Rochelle Walensky’s credentials.

“I just said that Dr. Walensky said just recently, in her 20-year career, she had never seen a variant that was so contagious. So, this is 20 years of her career. So this is absolutely, absolutely a major, major problem that we are trying to deal with,” she said.

She then dismissed Robinson and began seeking out questions from other reporters.

Later that same evening, Jean-Pierre’s chosen “expert,” Walensky, claimed on Fox News that the Biden administration is “looking into” a federal mask mandate. An hour later, she performed a full 180, writing in a tweet to a CNBC reporter who’d reported her original remarks that she hadn’t meant what she’d originally said.

As for Robinson’s question, there may be a valid answer. What’s known is that the original alpha variant was discovered using a microscope.

“Normally when you’re looking at samples you would expect to see lots of small clusters made up of multiple strains that are all slightly different. But when we looked at [the variant in] Kent, we saw about 50% of the samples were extremely similar, forming one massive cluster,” British epidemiologist Dr Meera Chand said last April.

Her remarks were published by Public Health England, a British health agency.

The delta variant was presumably detected in a similar manner.

Based on this limited information, it’s possible that scientists view the nasal samples they collect from patients under a microscope and look for a cluster pattern that fits that of the delta variant.

Note that this is just a theory — likely a false one — from a random nobody. But at least it’s an educated theory and not just a mindless assumption predicated on someone saying “this is the way it is because I said so.”

Vaccinating children isn’t a moral conundrum, it is a matter of science. Everyone will have an opinion, but we need to trust the experts.#COVID19 #PrimeTime

But according to polling data, the public’s trust in these “experts” is at an all-time low. Why?

Writing this week in Slate, which is a fairly left-wing site, University of California, San Francisco associate professor of epidemiology and biostatistics Vinay Prasad argued that the “experts” have hemorrhaged their own credibility with their constant contradicting statements and “noble lies.”

“When experts or agencies deliver information to the public that they consider possibly or definitively false to further a larger, often well-meaning agenda, they are telling what is called a noble lie,” he wrote.

“Although the teller’s intentions may be pure—for example, a feeling of urgency that behavioral change is needed among the lay public—the consequences can undermine not only those intentions but also public trust in experts and science,” he added.

A major reason faith and trust was lost in the COVID pronouncements of media and public health experts was how brazenly they politicized their directives.

Quibble with some of the examples in this great thread but the message was clear: protests were allowed only if liberal. https://t.co/iphHVmW2VE