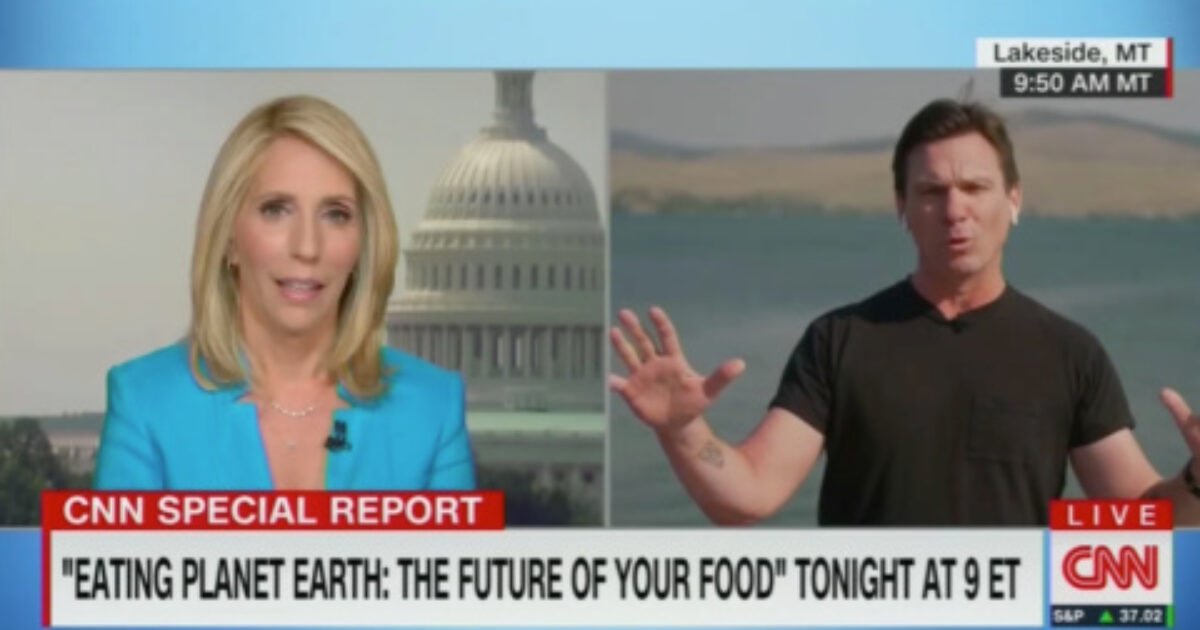 Radical climate-apocolypse sympathizers must have rejoiced Friday night when CNN anchor Dana Bash presented the latest en vogue initiative to save the planet from climate change.

Bash had CNN chief climate correspondent Billy Weir on to preview and discuss a new CNN special that would be airing later that evening, “Eating Planet Earth: The Future of Your Food”, that explores whether or not “‘swearing off meat completely” is essential to combatting climate change.

“I found it is a brave new world when it comes to what we’re going to be filling our bellies with going forward right now. Of course, it starts with the idea there are about 1.4 billion cows on the planet now. If you put them all together, it’ll third behind the United States and China as the biggest emitter of climate-cooking pollution,” Weir explained.

The climate correspondent thinks this footprint alone is enough reason for people to change the way they eat, saying that as a result “there’s this booming new movement for competitive protein.”

While most Americans recognize the “Impossible” planted based meat brand, Weir said they’re not the only company experimenting with protein.

“There are lab companies where they will take cells, a few cells from a cow or chicken and grow that meat in labs,” Weir described.

Weir went on to explain to that Pat Brown, the founder of “Impossible”, is a pioneer in terms of disrupting “Big Meat in typical Silicon Valley fashion.”

Brown, a Stanford medical school professor “looked at the amount of pollution, air pollution, water, the deforestation that comes with all of us trying to have steak for lunch and dinner” and tried to find a solution to “break this cycle and pretty much not eat ourselves out of our planet, to come up with something that is just as tasty, just as juicy, and just the same price, or even cheaper now,” Weir said.

He noted that if Americans were to cut meat out entirely, there would be ramifications for ranchers and farmers.

“So we look at the whole system tonight to see all the waste that’s in there and the insanely crazy new ideas that may just help fix this,” said Weir, describing the special.

Bash then redirected the narrative back to her initial point, pressing Weir on whether or not Americans can expect people to be coming for their real meat products.

“Yeah, Impossible burgers are very, very good. I can attest to that. Before I let you go, I don’t want to give away the ending of your special, but generally speaking, is swearing off meat completely — is that the big solution here?” Bash asked.

“I think some people would say yes. Those who are very sort of serious about veganism for different reasons would say yes,” Weir coyly replied.

“I think, I met a lot of other people who believe there is sustainable ranching that can happen, but it can’t happen the way we’re doing it right now and others suggest, you know, maybe you don’t want to have sausage for breakfast and a chicken Caesar for lunch and a t-bone for dinner seven days a week and sort of transitioning out of that would be healthier both for you and the planet,” Weir suggested, seeming to conflict with his own prior statements.

The segment was sponsored by Subway– yes, the cold cut sandwich shop– according to Media Research Center. The chain deli franchise has recently added some “Beyond” options to its menu.

The Clarity and Leadership for Environmental Awareness and Research Center at University of California, Davis reports that “Research says no,” giving up meat would not solve climate change,  “In fact, it continues to demonstrate giving up meat would be a woefully inadequate solution to the problem of global warming and distracts us from more impactful mitigation opportunities.”

“That’s not what certain people, companies, and news outlets would have you believe. Businesses invested in plant-based alternatives and lab-grown meat continue to exaggerate the impact of animal agriculture in efforts to convert meat-eaters to their products, mostly in the name of environmental health. But if Americans choose to forgo meat, it would have a minimal and short-term impact on the climate,” the report continues.