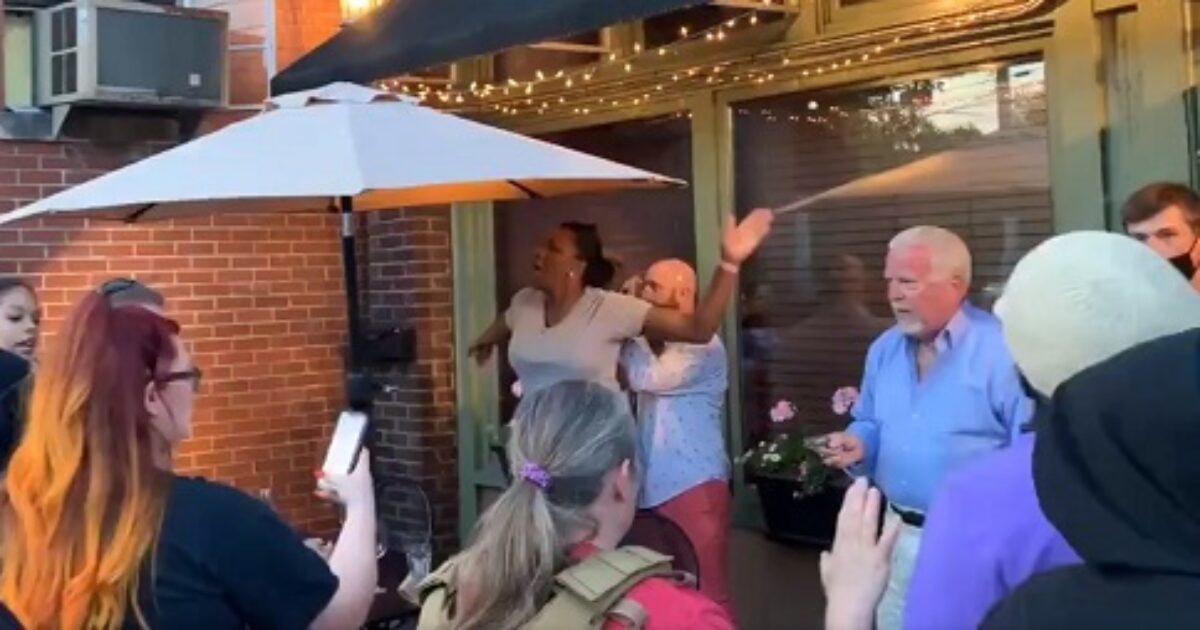 There was a tense standoff in Louisville, Kentucky over the weekend when Black Lives Matter protesters set upon a group of diners sitting in a restaurant’s outdoor patio area.

One of those diners was armed with a small handgun, and he was captured on video holding the protesters at bay as they shouted and otherwise harassed him — it’s not clear what may have prompted him to produce the weapon.

The BLM group was looking to exploit Saturday’s running of the 147th Kentucky Derby to call attention to the March 2020 death of Breonna Taylor, who was killed by police when they were fired on while executing a court-approved no-knock warrant to search her apartment for signs of drug trafficking — police insist they announced themselves beforehand.

Protesters approached the La Chasse restaurant, located in the Highlands, which is not far from the Churchill Downs Racetrack where the Kentucky Derby runs, and stopped at the establishment as diners sat outside.

A black woman, possibly a protest organizer, is seen in video footage frantically trying to get the small mob to move away from an elderly white man who is standing with his back to a window while holding a gun: “No, no, no,” she screamed to little effect. “Go!”

Confrontation between patrons at La Chasse and protesters. pic.twitter.com/iUFKA9zWvY

Kentucky is a constitutional carry state, making it legal to carry concealed firearms without a license for those able to lawfully possess such a weapon.

The man was relatively calm, given the circumstances, but that did not make things any less tense.

For those who have asked, yes this man appeared to be armed, as were a few protesters. It was a tense few minutes. #Louisville pic.twitter.com/BAw7r99KMf

Before the “Run for the Roses,” as the famous race is often called, Black Lives Matter Louisville, Black Market KY, Color of Change and UltraViolet commissioned a plane to fly around Churchill Downs with the message, “Protect Black Women. Divest from Police,” according to The Courier Journal.

The Courier Journal’s Hayes Gardner, who tweeted the video above, reported earlier in the day that protesters were chanting, “No Justice, No Derby.”

That their chant was futile, given that the race was over by this point, didn’t seem to matter to them.

Group will soon march on Bardstown Road, I believe. One protester is telling the group to brush off anything that onlookers may say to them, and that if police respond, to not engage with them and to continue walking.

Gardner showed video of a foot chase, noting that at least three people were arrested — the tweet does not list any reasoning, nor did the newspaper in noting the arrests.

Pardon the camera work. A foot chase and at least 3 arrests here in #Louisville. pic.twitter.com/dg1NEBacdd

Newly appointed Attorney General Merrick Garland announced last week that the Department of Justice is opening an investigation into the Louisville Metro Police Department in the aftermath of Taylor’s death,

“The investigation will assess whether LMPD engages in discriminatory policing, and also whether it conducts unreasonable stops, searches, seizures, and arrests, both during patrol activities and in obtaining and executing search warrants for private homes,” the DOJ said in a press release.

As the reporter documented in a series of tweets, the BLM protesters in Louisville pretty much made a nuisance of themselves throughout what serves as the biggest day of the year for the region.

Here’s a sampling of those tweets and others capturing the day’s events.

A group of about 20 protesters are marching outside of Churchill Downs ahead of the 147th Kentucky Derby in #Louisville. “We haven’t forgotten Breonna,” one sign says. pic.twitter.com/A5C5dQh6wz

Police have blocked Bardstown Road, and protesters are marching past them on the sidewalk. pic.twitter.com/fc96g0jlz5

More police at Bardstown and Eastern Parkway. Protesters are marching by them. #Louisville pic.twitter.com/LLjCZNIfcj