Inequality poses a dire threat to the American way of life. That may not be a sentiment many conservatives share, but they should. Inequality threatens the nation’s social fabric and the promise of the American dream: that each generation will live a more prosperous life than the one before it. But addressing inequality has long been the Left’s turf. It sets the terms of debate, replacing basic equality with intersectional “equity.” And it fixes the window of possible solutions, offering schemes to take from the global economy’s winners and compensate its losers.

It’s time for conservatives to respond by taking seriously the real problem of economic inequality and offering ideas that address its causes, not its outcomes — securing greater economic opportunities up and down the income ladder.

Policymakers and researchers are constantly debating the nature, meaning, and measurement of inequality in America, but these wonky debates conceal a stark reality: inequality in America is wide and getting wider. Based on the nation’s Gini coefficient, a basic measure of the dispersion of incomes, U.S. inequality is higher now than at any time since World War II and has been rising steadily for decades. This is not a global trend: the American experience is an outlier. Inequality in the U.S. is among the highest of any developed economy — closer to the level of Mexico or Costa Rica than Europe. 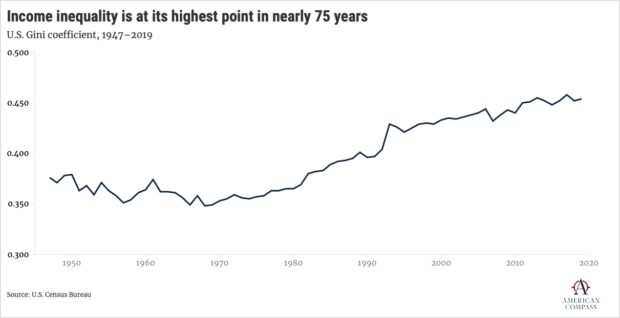 But inequality is more than a statistical measure of a nation’s economic wellbeing. It’s a reflection of the economic realities experienced by American families. Over the last 30 years, the typical American household saw its income grow from $58,000 to $69,000, after adjusting for inflation, whereas a family at the 80th percentile saw its income grow almost twice as quickly, from $107,000 to $143,000. This pattern repeats throughout the income distribution, with the higher income tiers pulling away from those lower down.

The problem with rising inequality is not that some people are doing well. It’s that others are falling behind—not that the gaps are wide, but that they are getting wider. An unequal society can still be one where everyone is getting ahead, where growth is broadly shared. Such widespread growth is central to our national project, uniting the varied interests across such a large territory and diverse society. It’s the spirit captured by the free-market aphorism that a rising tide will lift all boats.

That should be the case, but in today’s America, it isn’t. Inequality is widening because the growing economic pie of recent decades has not been evenly shared. The vast majority of gains go to those already at the top, as those with higher incomes experience faster income growth. In other words, the rich get richer, while everyone else falls behind.

The American economy has delivered this result with remarkable consistency in recent decades. Over the past 50 years, household incomes have grown three times faster for the top 20% of households than for the middle 20%, causing household incomes to diverge starkly. 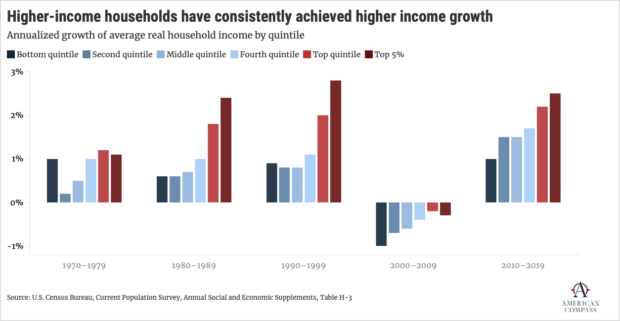 As a result, higher-earning households have seen their share of the nation’s income rise while that of middle- and lower-class families has declined. All told, the top 20% increased its share of national income by 9 percentage points over the past 50 years and now earns the majority of the nation’s income. All other classes saw their shares decline, with the middle class losing the most—about 3 percentage points. 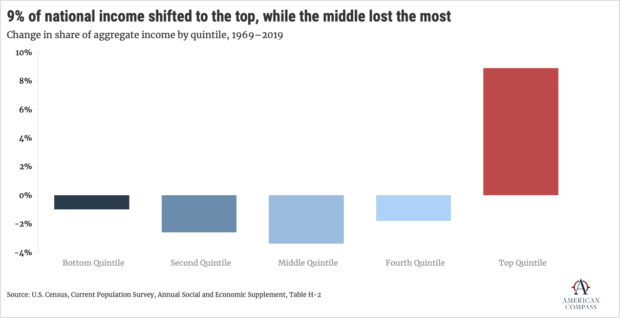 A 3-point decline may not sound like much, but it represents an enormous shift in earnings. If the middle class had shared equally in the economic growth of the past 50 years, the typical household today would earn an extra $17,000 annually.

These losses add up over time. Since 1990, the middle class’s lower earnings have cost the typical household $337,000 in cumulative income.

These disparities have entrenched wealth inequality. With income growth concentrated at the top, middle-income households haven’t been able to accumulate substantial savings in recent decades, which also means they have not shared in the gains from rapidly rising asset values. As a result, only the wealthy are accumulating wealth.

Since 1989, the bottom 40% have seen declines in wealth while the middle 20% tread water. Meanwhile, the 80th–90th percentile experienced dramatic gains—about 10 times as much as the middle class—and the top 10% about five times higher still.

And yet, even these depressing estimates overstate the financial health of the typical family, because they include the value of the family’s home. Rising home prices are encouraging, but so long as each household requires a house, selling one and using the money for something else isn’t really an option. Other homes will have gone up in price, too.

Looking at just financial assets—cash accounts, stocks, bonds, and so forth — the typical household has added almost no wealth in the past 30 years.

Middle-class households have managed to maintain some limited financial liquidity, but in the process, they have doubled their levels of debt. Factor in that debt, and 30 years of extraordinary economic growth for the nation translates to a worsening financial picture for the average family. By contrast, the average top 20% household (leaving out the top 1%) is up almost half a million dollars.

These dynamics suggest that our economy is failing at two of its most basic tasks: to ensure that the nation’s gains are widely shared and that the next generation is better off than one before it. We may be tempted to see incomes rise, however modestly, and assume that prosperity is widespread. Or to look at rising home values and homeownership and assume that the middle class is as financially secure as ever. But if American families are taking on debt faster than they can save, they will struggle to invest for the future, to accumulate wealth to pass onto future generations. A rising GDP is not enough to lift all Americans. The promise of homeownership will not rescue a nation of debtors.

This is not the widespread prosperity that free-market capitalism is supposed to generate, and it is not an outcome that Americans at any wealth or income level should accept.

Yet we seem to take for granted that this is simply how things go. Too many conservatives accept deepening inequality as a feature rather than a bug of the free market. Meanwhile, the Left obscures this basic economic problem with the language of identity politics and merely proposes more redistribution to address it—taxes and transfer payments, growing entitlements, a universal basic income. But for a body politic ailed by inequality, redistribution isn’t a life-saving treatment. It’s palliative care.

There’s no reason that growth must be spread so unevenly or that wealth should only accumulate to the wealthy—historically, neither was necessarily the case. The longer such trends continue, the greater the threat to our social fabric, our political solidarity, and the legitimacy of our free-market system.

Conservatives can and should develop ideas to restore our economy’s ability to provide widely shared growth, opportunity, and rising mobility from one generation to the next. Rather than the Left’s redistribution, the Right should make pre-distribution its goal — building an economy that provides real economic opportunity for everyone. The question is not whether deepening inequality is a problem — it’s how to address it. It’s time for conservatives to rise to that challenge.

Wells King is the research director of American Compass, which recently published A Guide to Economic Inequality, from which this essay is adapted.