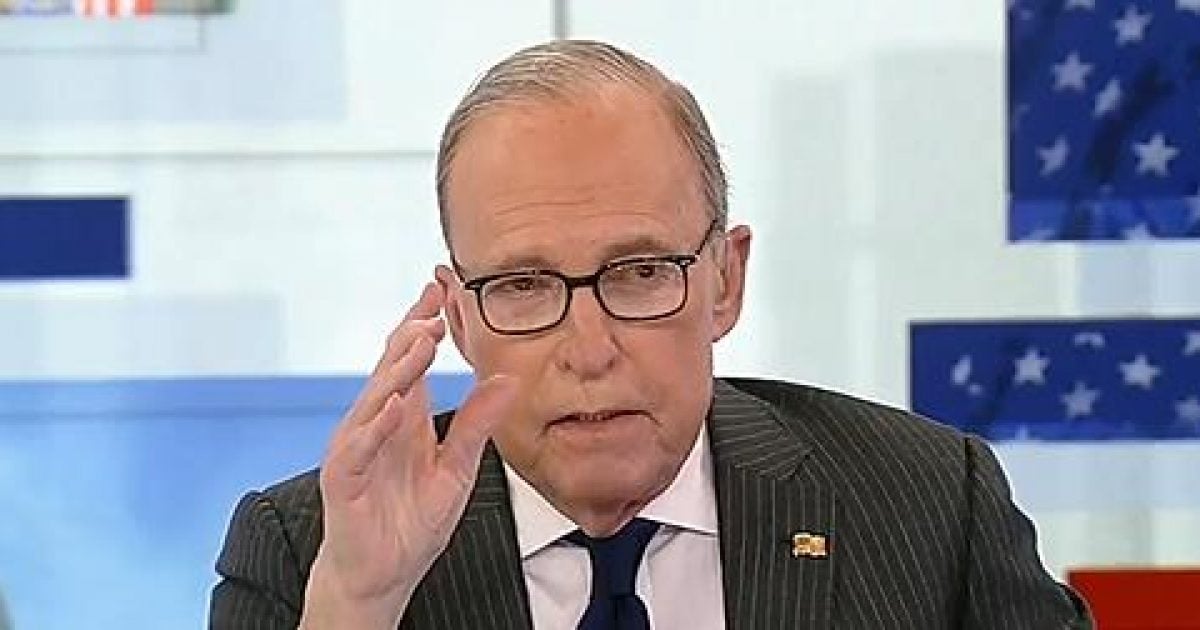 With an ostensible coronavirus relief bill that barely has anything to do with the pandemic now passed and out of the way, the Democrat-controlled House and Senate are reportedly seeking to push an energy and infrastructure plan to combat climate change.

But according to Trump era National Economic Council Director Larry Kudlow, the plan’s nothing more than “a step-by-step remaking of the entire U.S. Economy with a net-zero greenhouse gas emissions goal by 2050.”

In other words, it’s a plan for “green socialism.”

Speaking Wednesday on Fox Business Network’s “Kudlow,” which the former Trump administration official now hosts, Kudlow listed off just a few of the demands and mandates listed in the CLEAN Future Act to prove his point.

“One hundred percent carbon-free electricity by 2035, mandates [that] 40 percent of all federal funds in the bill will go to environmental justice communities disproportionally impacted by climate change. In fact, there will be environmental justice training for federal employees,” he said.

“The EPA will cut making methane emissions from oil and gas by 65 percent in four years — that’s incredible — and 90 percent by 2030. That will destroy fracking. Now in communities around the country, if there are excess carbon metrics, that could well lead to lockdowns of schools and businesses,” he continued.

Meanwhile, he added, the Federal Energy Regulatory Commission (FERC) will be authorized to institute “carbon pricing requirements for electricity rates, which comes awfully close to a carbon tax.”

Kudlow suspects this pricing scheme will be used to pay for the exorbitant bill.

The actual bill, measuring nearly 1,000 pages long, can be viewed below or accessed here:

Its requirements extend way beyond those listed by Kudlow.

It requires a 50 percent reduction in pollution and the building of only “zero-energy-ready” buildings by 2030, “substantial investments” (via taxpayer funds) in electric cars, SEC requirements forcing companies to disclose their greenhouse gas emissions and even the creation of a whole new office within the Executive Office.

“Look, this is green socialism, folks. In the name of climate change and even infrastructure, the government and their agencies want to run the entire economy, OK? Let’s call it what it is,” Kudlow said of the bill.

“The Federal Reserve looks like it will do its part with the banking and financial system. It’s remarkable. We’ve never seen anything this far left and this destructive to our economy and our energy story.”

He added that it’s essentially nothing more than a better-packaged Green New Deal, though Biden has tried to claim he just wants “to ensure a safe and prosperous future for all Americans.”

But if that desire is real, Kudlow argued, then Biden should be pursuing innovation, technology and — more importantly — DIVERSE energy.

“His top priority must be the production of all energy types. We should be expanding the energy portfolio, not ruling out certain areas. We need more energy. I don’t care [if it’s] renewables, carbon capture, carbon sequestration,” he said.

“Technological change and innovation will help us with these shifts. Technology will put us through. Innovation will get us there. It always does. We don’t have any emergency on global warming. That is far-fetched and trumped up.”

The problem is that the left and right view issue in diametrically different ways. The right does indeed believe that innovation and technology are the solutions to any climate issues. The left, on the other hand, believes that job-killing regulations, forced changes to people’s habits and even draconian lockdowns are the answer.

Last year, a leading U.N. economist penned a piece arguing that so-called “climate lockdowns” may need to be imposed on populations to control climate change.

She added that the only way to prevent these lockdowns would be to “overhaul our economic structures and do capitalism differently.”

Kind of like how the CLEAN Future Act proposes to do …

If you need more evidence that climate is about communism…

“Under a ‘climate lockdown,’ governments would limit private-vehicle use, ban red meat, and impose extreme energy-saving measures, while fossil-fuel companies would have to stop drilling.” https://t.co/SrLtQaOuWt

The irony is that the energy most suited to serve as a long-term solution to humanity’s needs is the one most disliked by many (not all) on the left.

In fairness to Biden, his administration has signaled possible support for nuclear energy, but apparently only if a “breakthrough” is made to make nuclear more appealing to them …

Speaking at #CERAWeek, Biden’s @ClimateEnvoy John Kerry says people might be “shocked” he supports finding a “breakthrough” in nuclear energy. “But I believe we need an all of the above approach because it’s urgent we reduce emissions as much as we can today.”