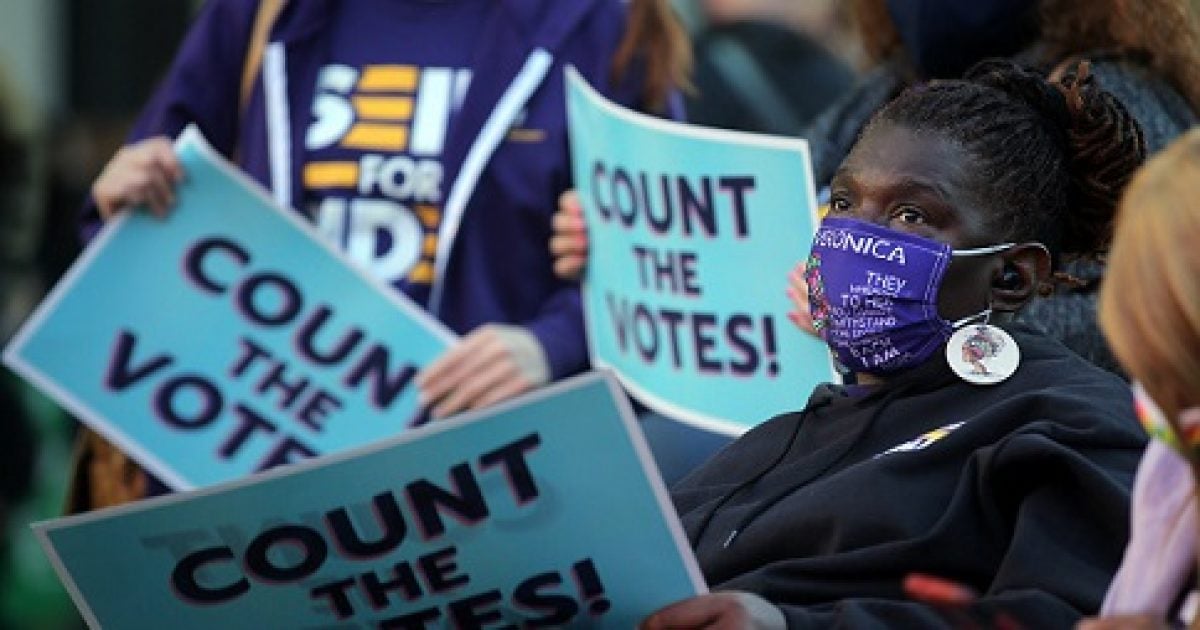 It’s rare that the left is willing to publicly broadcast that it’s not equal treatment that they seek, but special treatment. After all, they are doing yeoman’s work in “tirelessly dragging our states toward a more perfect union.” Just ask them.

The concept of critical race theory has always been an endeavor toward reparations, but we were silly to think this is limited to a financial end, as Brandon Hasbrouck, an assistant professor at Washington and Lee University School of Law, boldly calls for “vote reparations.”

How so? The assistant professor says black votes in America should count twice.

With both feet firmly planted in the 19th century, the assistant professor penned an op-ed run by the left-wing publication The Nation claiming that “black votes in this country are worth less than white votes.”

He cited the Electoral College as a core problem here, before making a nonsensical comparison between the state of Wyoming and Georgia’s 5th Congressional District.

“Abolishing this system would mean that ballots cast by Black voters—or any voters, for that matter—would count the same,” Hasbrouck declared.

Citing “the poisonous legacy of slavery,” the black educator adds, “But there’s another way to undo the damage of the Electoral College and other structurally racist political institutions: We can implement vote reparations by double-counting ballots cast by all black residents.”

No, this was not an article posted by The Onion.

Not at all. While it may be debatable whether he smoked a bowl before penning the article, this assistant professor dude is for real, as he tries to justify the specialized treatment of one demographic of people over another.

“Because white votes currently count more than black ones, double-counting black votes would restore electoral balance,” he opined. “Vote reparations would be a giant step toward remedying our nation’s long history of denying and devaluing black votes.”

“To address systemic racism, we must transform how we choose our government,” Hasbrouck wrote. “Even if vote reparations aren’t instituted, black voters will keep tirelessly dragging our states toward a more perfect union. But just imagine our country if our votes counted twice.”

Oddly, Hasbrouck’s Twitter account has been deleted and it appears he scrubbed his entire online presence, though it’s not clear when this may have happened.

Of course, the sad irony is that black votes in Atlanta, Detroit and Philadelphia, to name a few, may very well have been counted twice in the November election. At a minimum.

Black votes should count twice? If they vote Democrat in Detroit, Atlanta, Philadelphia, Pittsburgh, or Milwaukee they have been counted twice. Or five or ten times. Even if they’re dead. https://t.co/GIplCqYdR4

Here’s a sampling of other responses to the story from Twitter.

Why exclude other marginalized voices? All votes should be ranked by oppression. Blacks/NAs get four votes, Asians/Latinos get three votes, white womxn get two votes, white women get one vote, and every time a white man votes his candidate loses 4 points https://t.co/gUsiKqMTC4

Don’t fall for it. The idea that counting certain votes twice based off skin color is “vote reparation” and “equality” is stupid. The definition of equality is no one is worth more than another.https://t.co/lfwfrFR5lY

Every single person in your ridiculous premise, from the politician down to the black voter, is a Democrat. Democrat one-party cities, where black political power is huge, black politicians, police officers and chiefs abound, and nothing ever changes. Because it doesn’t have to.

Vote reparations. Well this is the most racist thing ive seen this month. This is abhorrent.

Umm, those were Biden and Harris policies.

How many vote do these two get? Whites who say their black. pic.twitter.com/XPk1iZhj31