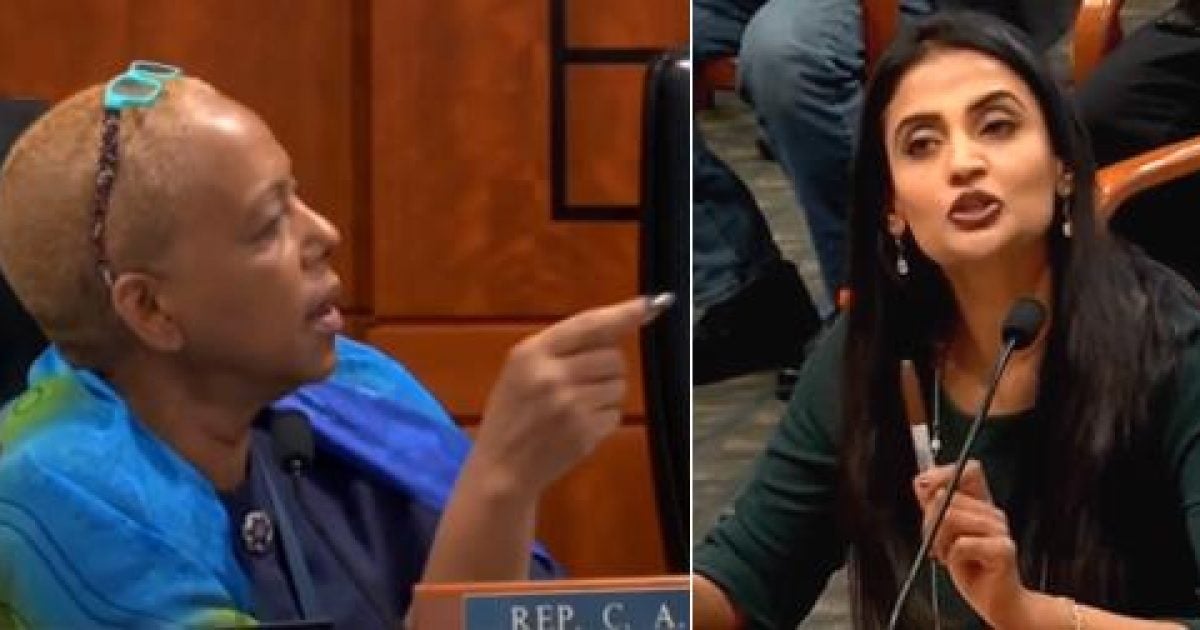 An East Indian immigrant from Michigan has become an overnight sensation for standing up to an obnoxious Democrat at this week’s public Michigan House Oversight Committee hearing about the 2020 presidential election results.

During the hearing Wednesday, the woman, Hema, joined other GOP poll watchers in testifying about what she’d witnessed on and after Election Day.

After she finished speaking, members of the Michigan House Oversight Committee were permitted to ask her questions. But instead of asking any questions, one member, state Rep. Cynthia A. Johnson, decided to talk trash.

In rambling diatribe, the Democrat lawmaker accused every witness, including Hema, of being a liar, and demanded they testify under oath.

Listen to her whole rant below, starting from the 15:21 mark:

That prompted committee chair Rep. Mike Hall to remind her of the hearing’s purpose.

“I just want to remind you I think it was the purpose of today’s hearing to hear from people across Michigan who witnessed things at the TCF Center,” he said.

Johnson replied by complaining that Hema and her peers were taking too much time and that none of them were from Detroit, which is where the ballot-counting occurred.

“They’re taking so much time, and I see no Detroiters here,” she said.

Hall reminded her again, of the meeting’s purpose and also brought up President Donald Trump’s attorney Rudy Giuliani, who was present for that day’s hearing.

“Today we’ve invited Mr. Giuliani, and Mr. Giuliani has brought forward witnesses that he says have first-hand knowledge of fraud. That’s what we are doing today. And if you want to do other hearings, we’re doing more hearings, but today we’re here to hear from these people. So do you have a question for these witnesses?” he asked.

Johnson said that no, she had no questions — she just had “concerns.”

This prompted Hall to say she’s out of order, spurring Johnson to double down again with her complaint about the witnesses not being under oath.

The committee chair responded by explaining that requiring witnesses to be under oath “is not done here in this state.”

That’s when Johnson blew her lid.

“It may not be done under the state, but you’re allowing people to come in here and lie, and I know they’re lying!” she bellowed.

This particular moment may be heard below:

ARE YOU KIDDING ME:
The TRUTH shall set you free…sadly
D-Rep C.A. Johnson believes that the witnesses are lying here in Lansing.
🎥 @RSBNetwork #MichiganHearings pic.twitter.com/R4ldsX6OF2

Hall immediately declared Johnson out of order again. Giuliani then jumped in to defend his collection of witnesses.

“I would like to point out that every single witness we’ve presented here has sworn an affidavit,” he said.

A second later, Hema then jumped in with her own scathing clapback.

“I would do it,” she said, referencing being placed under oath.

She added, “And I will still repeat the exact same thing I watched, and you know what? I also want to say one thing. If it is a lie, it may change because a liar has to have a lot of memory power. If it is truth, you can ask me in the middle of the night and still be the same.”

Rep. Cynthia A. Johnson accuses witness in Michigan State Senate Committee on Oversight of LYING about her testimony re: 2020 election fraud.

Her response is a mic drop moment.

“If it is truth, you can ask me in the middle of the night and it would still be the same.” pic.twitter.com/lUiwMhN7G1

And thus a star was born.

See the love she’s getting on social media below:

Bless you Hema( at the Michigan hearing.)Thanks for your strong spirit and your passion for truth.

I’m not sure how you spell her name but Hema is a boss. And Cynthia Johnson is an evil pathological prick. Michigan gotta do better than her.

This woman is what American Patriots look like in 2020.This American is so proud of these people who are putting it all on the line for Truth, Justice , and the American way of life. Thank you all. May God bless and protect you.

The hearing on RSBN is incredible! Hema was wonderful and sooo credible!

And they say Republicans hate immigrants?

During her full testimony, Hema covered several topics, including …

And the fear of being targeted with intimidation for speaking up:

I like her. Sad she has to tell democrats they shouldn’t try to intimidate immigrants for coming forward pic.twitter.com/ZLv8QwHrwr