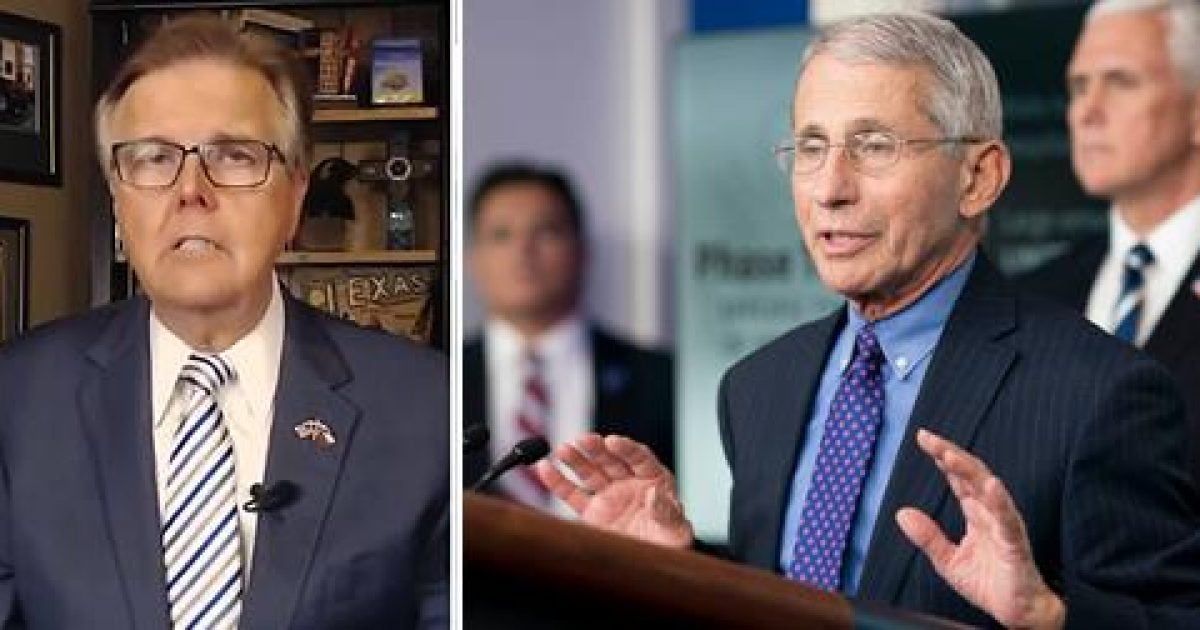 He made the statement while speaking with Fox News host Laura Ingraham about disparaging remarks made by Fauci this week to Congress in which he’d trashed Texas for allegedly “skipping” over certain reopening steps and not extending its lockdown.

“Fauci said today that he’s concerned about states like Texas that skipped over certain things. He doesn’t know what he’s talking about. We haven’t skipped over anything. The only thing I’m skipping over is listening to him,” Patrick said.

He also pushed back on the patently false claim from left-wing media critics that Texas has somehow become worse than New York vis-à-vis the coronavirus pandemic.

“Reality is a lot different. We’ve had 2,424 people die, and New York has had over 31,000. Even California has had almost three times as much as Texas,” Patrick said.

Indeed, though the narrative touted by the left-wing propaganda media has been entirely anathema to the truth, as usual.

Based on the media’s coverage of COVID-19 this week, which state do you think had the most reported coronavirus deaths today – Florida, Texas or New York? Note: New York has the smallest population.

but sure, blame “Trump!” and “Republican Governors!” for “the worst” outbreaks “by far!”

The media have also been falsely claiming that Texas has surpassed its ICU capacity. But according to Patrick, “It’s just the media misreporting information.”

Plus, according to the top executive of an emergency room chain based out of Texas, the vast majority of actual coronavirus hospitalizations have involved mild symptoms:

The pushback by Patrick came several hours after Fauci testified before Congress.

“[I]n Florida, Texas, California, and Arizona, more than 50 percent of the new infections are in those areas where we’re seeing surges. … We’ve got to make sure that when states start to try and open again, they need to follow the guidelines that have been very carefully laid out, with regard to checkpoints,” he said during his testimony.

“What we’ve seen in several states are different iterations of that, perhaps maybe in some, going too quickly and skipping over some of the checkpoints.”

Fauci: “I am also quite concerned about what we are seeing evolve right now in several states … they need to follow the guidelines that have been very carefully laid out with regard to [reopening] checkpoints … in some, they’re going too quickly & skipping over some.” pic.twitter.com/C4iwL4mFtW

Have you heard the riddle about what came first — the chicken or the egg? The same basic concept seems to apply here, in that it’s unclear if Fauci is reaching these false conclusions based on the propaganda he consumes from the media, or whether the media is basing its own propaganda on the false conclusions from Fauci.

Either way, the facts belie the fear-mongering narrative he’s been pushing since day one, with more and more evidence emerging daily that the left’s beloved lockdowns were a massive failure that shattered the economy for a disease with a recovery rate estimated to be between 97 percent and 99.75 percent.