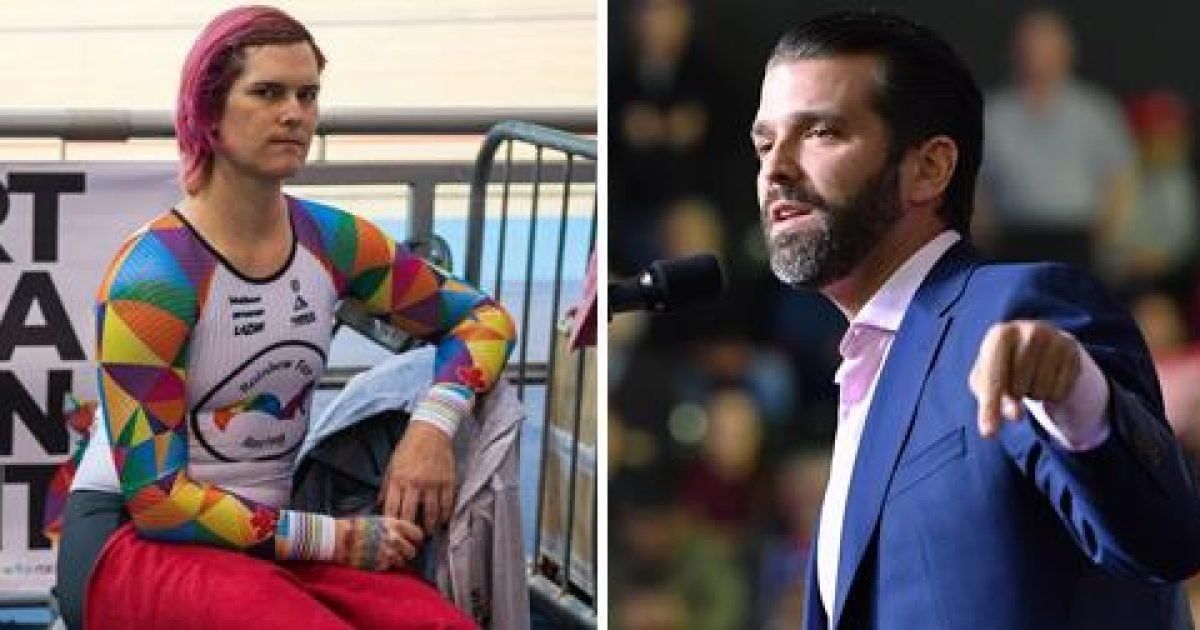 Dr. Rachel McKinnon, a “transgender woman” and competitive cyclist who won the 200-meter gold medal at the Masters Track Cycling World Championships on Sunday, has blamed Donald Trump Jr. for the “transphobic hate and harassment” he’s been receiving online for having stolen the medal from biological women.

In a series of tweets posted after his Sunday victory, he wrote of the “hate against trans women” he’s been experiencing on social media and pinned the “hate” on a tweet thread that Trump Jr., the eldest son of President Donald Trump, had posted Monday morning.

“Oh THIS explains the explosion of hate messages I’m getting!!” he tweeted in a post that linked to Trump Jr.’s thread.

See his complaints below:

They’re flooding my IG with hate speech. That usually means that some right wing outlet published something hateful.

Oh THIS explains the explosion of hate messages I’m getting!! https://t.co/4DTjkb1suB

The transphobic hate and harassment from this world championship win is MUCH worse than last year’s.

The hate against trans women is still heating up.

Stand up. Be loud. It’s more important than ever.

As of Wednesday morning, every single one of McKinnon’s tweets boasted a “yuge” negative ratio. And if you scroll through his feed, you’ll see that this trend began long before the president’s son chose to tweet about his cycling.

In response to the tweet thread he posted Monday, even his sworn liberal enemies nodded in agreement, with one tweeting, “I’m liberal as they come but I actually kind of agree with this,” and another writing, “We don’t agree on much, but on this, totally agree!!!!”

Look at his tweets below:

You can never be woke enough! Sorry to all female athletes who spent their lives mastering their games.

As of Wednesday morning, none of the tweets boasted a negative ratio. The replies meanwhile consisted almost entirely of chants of agreements from conservatives AND liberals.

I’m liberal as they come but I actually kind of agree with this. I was in the army and I know what men and women can handle strength wise. They had to do more pushups than us and we had to do more sit ups. They also had a shorter amount of time to run than us.

We don’t agree on much, but on this, totally agree!!!!

So, @DonaldJTrumpJr is an asshole. We know that. But let’s be honest. Is this really fair competition? I’m very liberal in my thinking but this is garbage.

I agree..men & women are built differently (BIOLOGICALLY) & have different strengths..when it comes to competitive sports, this is NOT FAIR..plain & simple! This has absolutely NOTHING to do with prejudice or acceptance. The answer? A separate division for transgender sports? ?

I agree with this and people will think I’m a terrible person for saying that. I don’t mind Trans people but to have someone who was born genetically a man then complete in a women’s race isn’t ok. Not fair to any of the women who put so much effort into this @DonaldJTrumpJr

In order to prevent this unfair competition from occurring again, those females born as such must make it clear they will unanimously pull out of any competition if a male who identifies as female is included. A sad day for female athletics all around.

wow hope HE’S happy with HIMself competing with and beating real,genuine fantastic female athletes.hope HE’S pleased….sorry for the ladies for all the hard work and commitment that they’ve put in to get where they are today.

@DonaldJTrumpJr I don’t agree with a lot of what you say, but for this I am ? with you. This BS needs to stop. The #LGBT folks got the world by the balls… this ? needs to stop! https://t.co/UYqfgLVVza

Who would have ever thought that a man pretending to be a woman athlete to steal awards from actual women athletes would be the catalyst needed to unite conservatives and liberals?

Of the tweets Trump Jr. posted Monday, one linked to a Townhall story that notes that had McKinnon competed against his own type (i.e., men), he wouldn’t have come out on top or even close to the top.

“In fact, if McKinnon had competed against these men instead of women, the Canadian’s time would not have even finished in the top 10. McKinnon would have placed 11th, right behind Poland’s Adrian Swiderski, who posted a time of 11.386. This means McKinnon would not have been allowed to compete in the men’s sprint championship.”