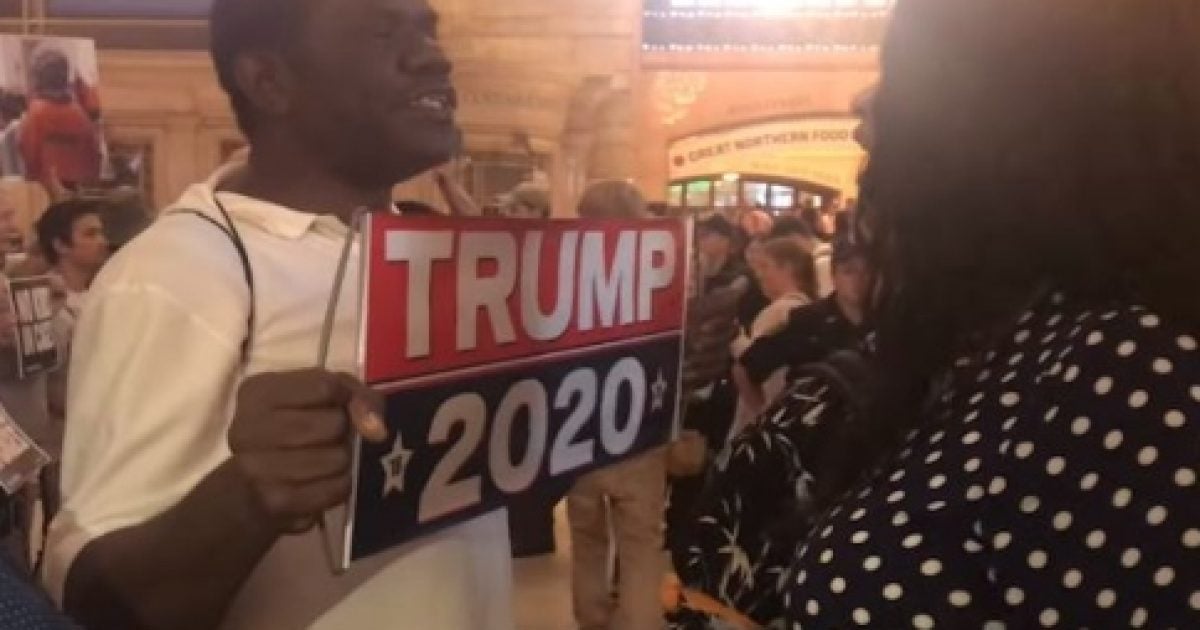 Trump supporters counter-protested during an anti-ICE rally in New York City where one man defiantly faced liberals and shut them down.

As hundreds gathered in New York City’s Grand Central Terminal last week to protest Immigration and Customs Enforcement and President Trump’s immigration policies, others arrived to counter the protests and support the president.

One man holding a “Trump 2020” sign angrily took on the liberals, challenging their arguments and calling them out on their hypocrisy and disrespect.

Rise and Resist NYC staged the hour-long event which was described on their Facebook page as a “silent” protest to “object to Border Patrol and ICE terrorizing immigrants, refugees, and asylum seekers.” Participants were told that banners would be on hand declaring NO RAIDS/CLOSE THE CAMPS/ABOLISH ICE.

But Trump supporters also came out and held signs of their own. One man in particular let the leftists know he was tired of their lies.

Reporter Pamela Hall of The “Silent” Majority No More caught the scene on video as the black man argued with a protester that “it’s not about color” as he defended Trump.

“It’s not about color, it’s about policy!” he countered as one woman insisted otherwise. “You are brainwashed.”

“He called me a house negro,” he said a moment later, speaking with someone off camera.

“That’s why I don’t like white liberals or Democrats. They are the worst of the worst on this earth. A white liberal and a Democrat wants to control you – that’s what they want to do.  They are pathetic,” he declared.

“If you’re a white liberal or Democrat, pay me reparations,” he continued. “Not that I want it but y’all say I deserve it. And I will immediately turn it over to the Trump campaign. I do not want your money.”

“I have the cure for your white guilt: Put your money in my bank account and you will be healed. Thank you,” he added.

A Rise and Resist member, Alexis Danzig, told Fox News that the protest was a stand against “the Trump administration’s disastrous policies at our border,” and added that she would vote for “anybody but Trump” in 2020.

We are at Grand Central Station in NYC raising awareness about ongoing abuses by the Trump Administration. We will not give up until all migrants, refugees, and asylum-seekers are freed. https://t.co/C3OUTvn6JJ

A Trump supporter named Jennifer, however, said when Democrats had the White House and Congress under former President Obama, “they did absolutely nothing” to deal with the border crisis. She also called out the lack of respect for ICE personnel and law enforcement in New York City.

Hall posted other videos from the event which, according to Fox News, drew about 300 people. One exchange showed the left’s concentration camp lies being challenged.

Twitter users applauded the counter protesters and the one man bold enough to call out the lies of the left.

We can “counter-protest” too! Good!

A Trump 2020 patriot of color challenged the leftists. It’s Not About Color! “No Raids – Close The Camps – Abolish ICE! ” Aug. 29, 2019 – Rise and Resist in a silent protest inside the main hall at Grand Central Station was… https://t.co/CCFXWBfWJu

I’m a New Yorker. I would vote for this guy. It would be a nice change of pace to have a governor who has common sense and loves his country.

He is so right about the white libs who show up at these protest. They are biggest racist hypocrites out of all the Democrats. They say their that their inclusive and preach tolerance, but they lose their minds when they see a black conservative with a MAGA hat.

Need more of that. A lot more.