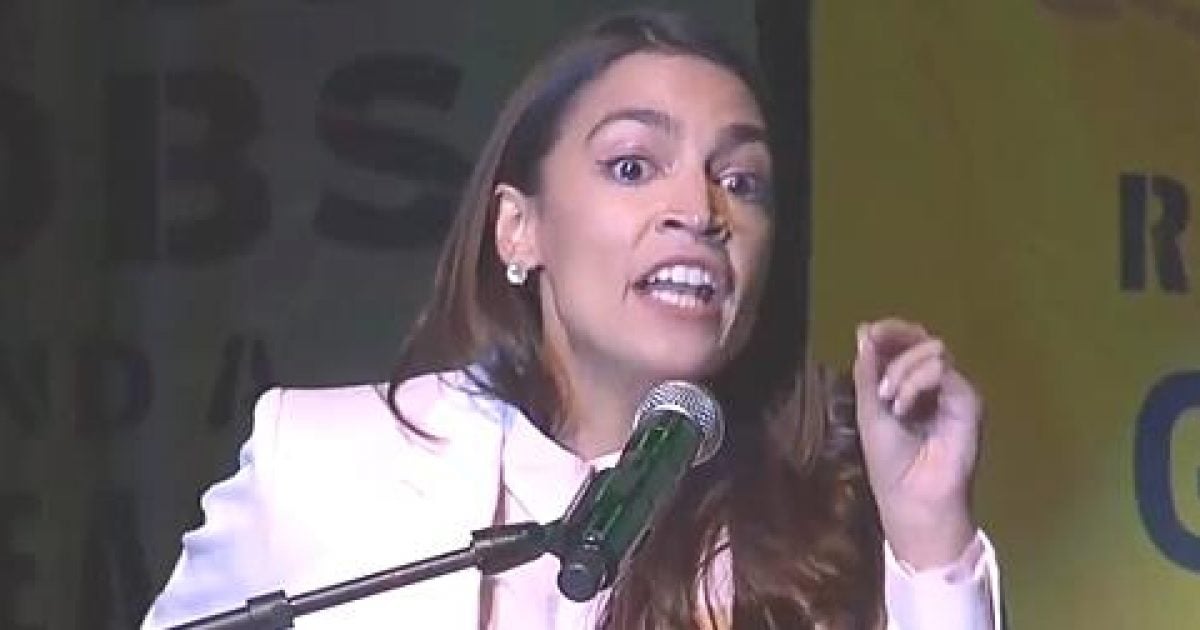 “I will be damned if the same politicians who refused to act then are going to try to come back today and say we need a middle-of-the-road approach to save our lives!” she bellowed in fury.

She presumably meant the Democrats, including then-Sen. Biden, who in 1989 refused to act when the then-director of NASA’s Goddard Institute for Space Studies delivered a speech to Congress warning of the alleged dangers of what was then called global warming.

“That is too much for me. We cannot and we will not accept anything less than a solution to save ourselves, and that’s exactly what this is,” she added.

While AOC abstained from citing any specific Democrats, her recent rhetoric makes it clear that she’d been referencing Biden and, more specifically, a climate change plan he’s currently drafting.

To appease blue-collar Americans, the plan will also “be supportive of nuclear energy and fossil fuel options like natural gas and carbon capture technology, which limit emissions from coal plants and other industrial facilities,” according to Reuters.

The goal would be to appease both radical environmentalists and everyday Americans. But according to Ocasio-Cortez and others like her, trying to appease both sides is a big no-no:

Her refusal to even entertain negotiations toward a bipartisan solution speaks to her radicalism. As a proponent of the so-called “Green New Deal,” which she and her team drafted, the young congresswoman wants to completely restructure American society from the bottom to the top.

Not only is the plan economically unfeasible, but it would, according to a report published last month, reportedly spur “significant environmental damage.” It’d essentially destroy the economy and the environment in one fell swoop. Biden’s plan, not so much.

This radicalism is, sadly, now ubiquitous throughout the Democrat Party and seems to apply to every issue, from illegal immigration to abortion. For instance, congressional Democrats in the Senate have this year repeatedly down-voted a GOP-crafted bill that would simply ban infanticide.

Dovetailing back to AOC’s remarks Monday, they marked the third time she’d taken a shot a Biden. The second time occurred last week (note the tweet above), while the first time happened during an interview with Yahoo News last month, around the time that Biden announced his candidacy.

“I can understand why people would be excited by that, this idea that we can go back to the good old days with Obama, with Obama’s vice president,” she said dismissively at the time.” There’s an emotional element to that, but I don’t want to go back. I want to go forward.”

As radical as former President Barack Hussein Obama was, he and Biden at least tried during their tenure in office to work with congressional Republicans. The newest crop of Democrats seem to resent this. Their attitude appears to be that it’s either their way or the highway.

Back in January, for example, House Speaker Nancy Pelosi and her fellow Democrats prematurely rejected a grand compromise to end the then-ongoing government shutdown.

In a statement published to Twitter moments before Trump unveiled his compromise, Pelosi flat-out said the deal was a no-go. Keep in mind she hadn’t even heard it yet.

The real path forward is simple: McConnell must permit votes & passage of bills to fund & reopen the government, Trump must sign. Then we must move forward on border security—we all agree it’s vital, but not a wasteful, abhorrent wall, sea to shining sea.

My response to reported White House offer to end President Trump’s government shutdown in exchange for the border wall and DACA: pic.twitter.com/WhsJgRNW56

Note for instance what she said while speaking at a town hall event three months ago about the bipartisan criticism her radical climate change proposal has received.

“You know what? I don’t care anymore. I don’t care anymore, because again, I’m at least trying, and they’re not. So the power is in the person who’s trying, regardless of the success. If you’re trying, you’ve got all the power, you’re driving the agenda, you’re doing all this stuff,” she said.

This attitude has been directed at Pelosi as well, ironically enough.