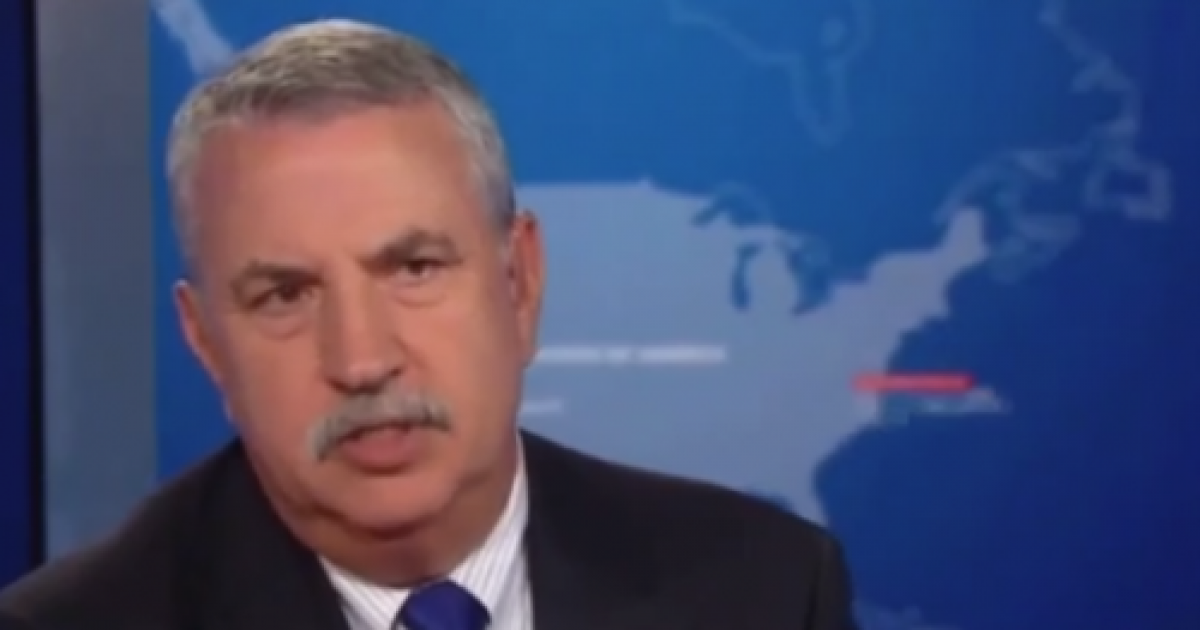 On Tuesday a columnist with The New York Times who’d previously derided President Donald Trump as a “disturbed” and “demented” man admitted that, one, the White House’s concerns about the porous southern U.S. border are valid, and two, a border wall is desperately needed.

There’s a catch, however (more on this later) …

When even the NYT acknowledges there’s a crisis at the border and we need a wall.

If they keep this up by 2024 they’ll admit the Russia Hoax was just that… a YUGE hoax!!! https://t.co/dBFGXpEH5D

“The whole day left me more certain than ever that we have a real immigration crisis and that the solution is a high wall with a big gate — but a smart gate,” he wrote.

What specifically unnerved him was seeing where “the newest 18-foot-high slatted steel barrier” along the San Ysidro Port of Entry ends and gives way to “the wide-open hills and craggy valleys.”

Wide-open hills and craggy valleys that he now appears to realize are practically invitations for “drug smugglers, asylum seekers and illegal immigrants” to seek illegal entry.

“According to U.S. Customs and Border Protection, since October, along the whole southwest border, from California through Texas, there have been 190,000 apprehensions of “family units” (a child under 18 with a parent or legal guardian) who crossed illegally from Mexico, up from 40,000 a year ago. That’s an increase of 374 percent,” Friedman’s column continues.

His column then pivots to his core argument, which is that a wall is needed, albeit for reasons that differ from those of the president and his top immigration adviser, Stephen Miller.

“Without a high wall, too many Americans will lack confidence that we can control our borders, and they therefore will oppose the steady immigration we need,” the columnist opined.

“But for this wall to have a big gate, it has to be a smart and compassionate one, one that says, ‘Besides legitimate asylum seekers, we’ll accept immigrants at a rate at which they can be properly absorbed into our society and workforce, and we’ll favor visa seekers with energies and talents that enrich and advance our society.'”

It seems Friedman seeks a compromise wherein Trump and his supporters would be granted the wall they want in exchange for them agreeing to an increase in immigration.

How much of an increase? So much so that anyone who shows up at the border who boasts “energies and talents that [would allegedly] enrich and advance our society” would be permitted entry.

Speaking Wednesday on CNN’s “The Situation Room,” he clarified his idea a bit more.

“Democrats were ready to fund more border security but at the same time we’ll create a legal pathway for people here,”  he said. “We’re going to limit the number of I.C.E. arrests and we’re going to have a rational in-flow of people of the kind of people that are both high energy, high IQ that could drive our country forward. We need a compromise.”

“[I]t is pretty clear to me that unless we can assure a significant number of Americans that we can control our border, we’re never going to have the proper immigration flow I think we need, we desire and that we actually have a moral responsibility given our history as a nation of immigrants and a refuge for people fleeing persecution,” Friedman added.

And there’s the rub. Trump’s supporters would likely argue that no spontaneous immigration along the border should be tolerated — that every aspiring immigration should be forced to go through the tedious but legitimate process of immigration followed by prior immigrants.

So yes, while it’s nice that Friedman has admitted that the crisis is real and that a border wall is indeed needed, his reasoning for wanting a wall is somewhat lacking. Though again, it’s a start.

Yet even this admittedly flawed idea is taking heat from The New York Times’ far-left base, which feels that all immigrants who appear at the border should be granted entry.

This is “Build The Wall” apologetics—which is a shame. Your colleague @fmanjoo came much closer to getting it right in his column about open borders. https://t.co/ST5B6ghvpG

Your NYT piece suggests you want the high IQ immigrants but not that are not other poor countries “not the best people” just like Trump. You suggest this country was made great because of these “high IQ” people and we can sustain accepting ordinary people looking for work.

There’s no need for any wall at all. Freedom of movement is a human right. Open borders now.

@nytimes how can you print this garbage? “The whole day left me more certain than ever that we have a real immigration crisis and that the solution is a high wall with a big gate — but a smart gate.”

You should be ashamed of your xenophobia and pandering to nativists, Tom. Shame on you.

The US is literally a nation built on immigration. Pulling up the ladder now is wrong and against both the interests and principles of the US.

And this is reason #billion why Republicans find it so difficult to ever work out real compromises with the far-left Democrats. Even this idea, which calls for using a wall to increase immigration, is seen as “xenophobic” and disgusting by the Democrat Party’s radical core base.

The good news is that at least Friedman now knows how Trump has felt these past three years:

This is EXACTLY what Trump has been saying for 3 years. He’s been demanding a wall, and your newspaper has been accusing him of racism for doing so. I’m glad that common sense is FINALLY entering the media’s narrative, but you owe @realDonaldTrump a HUGE front page apology first.