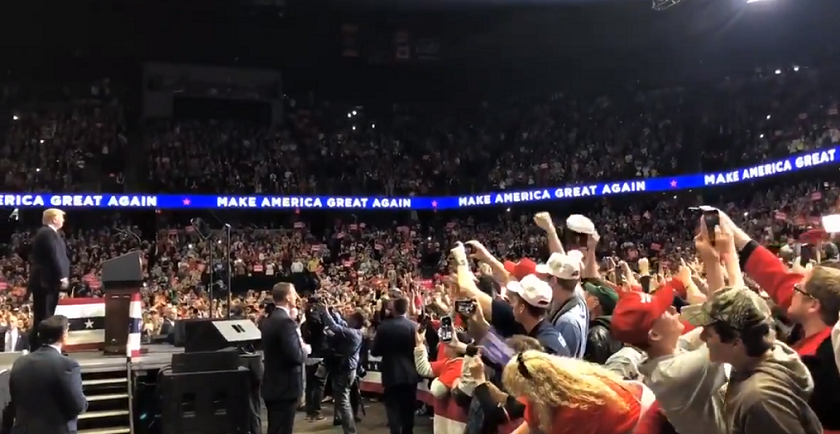 If this is a taste of what President Trump’s 2020 presidential campaign is going to look like, it’s going to be a barn burner.

Appearing at a rally Thursday night in Grand Rapids, Michigan, the president didn’t pull any punches, cursing as he expressed his contempt with the Democratic Party’s never-ending “resistance” to his presidency.

And rally goers, who packed Van Andel Arena to the rafters, loved every minute of it, even if it did have the Trump-hating media cabal clutching their pearls.

“So the Russia hoax proves, more than ever, that we need to finish exactly what we came here to do: Drain the swamp,” Trump told the raucous crowd. “The Democrats have to now decide whether they’ll continue defrauding the public with ridiculous bullshit… partisan investigations, or whether they will apologize to the American people and join us.”

That Trump might be a little testy after enduring a nearly 2-year long investigation of alleged collusion with Russia that failed to produce one single indictment to that effect is understandable.

“The collusion delusion is over,” the president told his cheering supporters. “Total exoneration. Complete vindication.”

But Democrats still pursue the claim, as remarkable as that is given that more than $30 million was spent to turn up nothing — which adds credence to Trump’s claim it was all a “witch hunt.”

Democrats like Rep. Adam Schiff, from California, who chairs the House Intelligence Committee, who the president called out, assigning one of his chief antagonists with a Trump-worthy nickname.

“Little pencil-neck Adam Schiff. He’s got the smallest, thinnest neck I’ve ever seen,” he said. “He’s not a long-ball hitter, but I saw him today, ‘Well we don’t really know, there still could have been some Russia collusion.'”

“Sick, sick,” Trump added. “These are sick people and there has to be accountability because it is all lies and they know it’s lies.”

To say the “ridiculous bullshit” line was popular with Trump supporters would be an understatement. As one social media user observed, he was “just saying what we’re all thinking.”

Trump 2.0, the post-Mueller President. Fired up and building the wall and saving the Great Lakes and telling dems they need to decide if they want to continue to "fraud the public with ridiculous BS." Except he said it.

Yes he did say it. It really needed to be said.

completely made my day/night! i was rollin’ when @POTUS said it!! just saying what we’re all thinking