Not long after Oprah Winfrey blasted “brutally powerful men” in a speech given at the 2018 Golden Globes, a chummy photo of the media mogul with sexual predator Harvey Weinstein took over the internet. 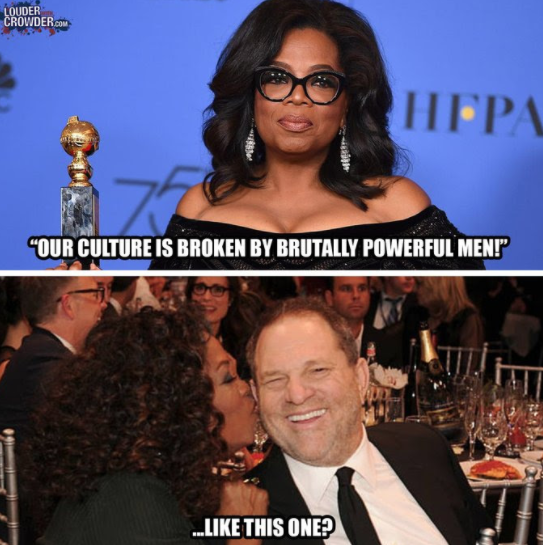 Liberals went wild and started screaming “Oprah for president” over her politically charged speech Sunday night. Winfrey took the stage to accept the Cecil B. Demille Award, and rallied her liberal fans with a message that blasted sexual harassment as well as President Trump… and men in general.

Winfrey slammed what she called a “press under siege” and insisted she has an “insatiable dedication to uncovering the absolute truth that keeps us from turning a blind eye to corruption and to injustice, to tyrants and victims and secrets and lies.”

Does that include open secrets like that of her apparent pal, disgraced Hollywood “tyrant” Harvey Weinstein?

As Winfrey blasted a culture of sexual inequality, she eventually laid the blame squarely on the shoulders of “brutally powerful men.” It didn’t take long for pictures to emerge of Winfrey sharing friendly moments with someone who could easily be annointed the King of sexual assault, Weinstein — a “brutally powerful” man, indeed.

Conservative actor James Woods was “all ears” and used the photo to blast Winfrey’s nauseating hypocrisy:

Woods was not alone, and it was clear this photo was going to come back to bite (no pun intended):

OPRAH: Our culture is broken by brutally powerful men.

But it was conservative commentator Steven Crowder who juxtaposed a picture of Oprah giving her lecture on “brutally powerful men” next to her sucking Weinstein’s ear that really hit home:

Woods had a few more pictures up his sleeve:

Social media users, sick of the generalizations and hypocrisy, joined in and began circulating pictures of Winfrey and Weinstein that tell a different story from the one she was selling Sunday night. It was a clear rebuttal to celebrity elites’ never-ending lectures on morals after collectively covering up Hollywood’s longtime sick open-secret of rampant sexual harassment and abuse.

I actually have a lot of respect for Oprah Winfrey. But think she should stick to Entertainment. Something tells me if she ever did decide to run for Public Office, this Photo would be retweeted a Million times. #OprahWinfrey pic.twitter.com/pjC4SMEgHT

If Oprah does decide to make a presidential run for 2020, it won’t be as easy as liberals think.