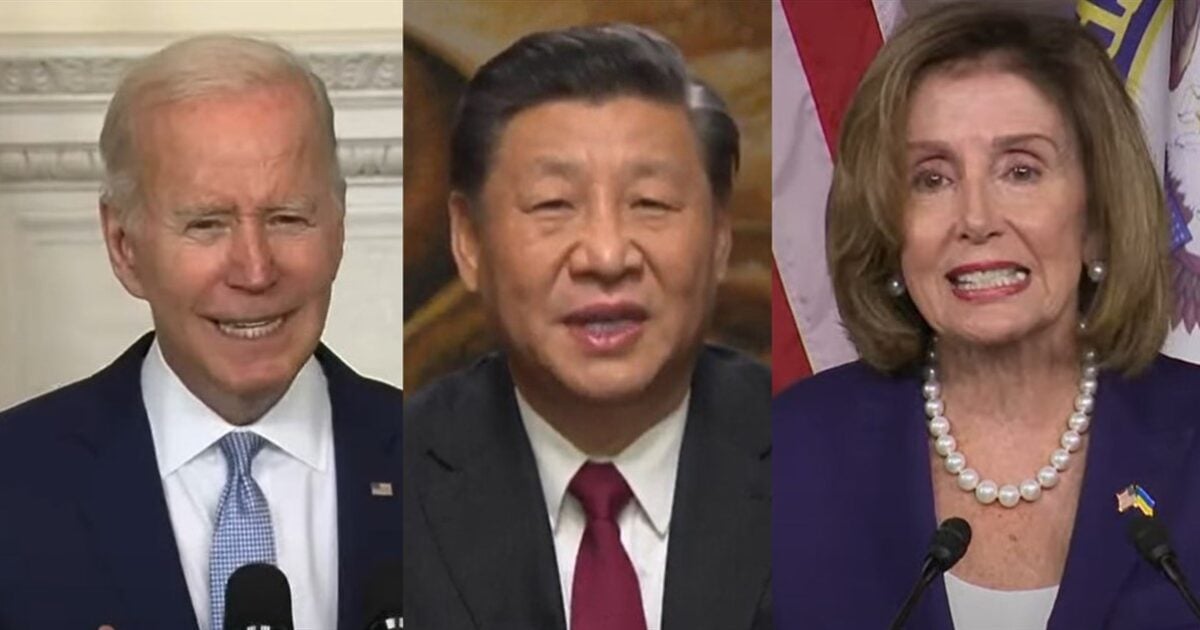 The raging four-alarm dumpster fire that is America’s foreign policy under President Joe Biden may soon be burning hotter as Speaker Nancy Pelosi’s upcoming trip to Taiwan is on the brink of generating a major international crisis that could be the spark that ignites a major war with the communist nation.

Despite the Chinese regime’s expression of its extreme dissatisfaction with Madame Speaker’s visit to the disputed territory during her Asian tour next week, Pelosi and the administration have been defiant in the face of Beijing’s concerns, and on Friday, the rhetoric reached a stunning new level when a propaganda organ for the Xi Jinping government said that the provocative trip could lead to her plane being blown out of the sky.

On Friday, commentator Hu Xijin of the Global Times, a Chinese state media outlet kicked it up several notches.

“If US fighter jets escort Pelosi’s plane into Taiwan, it is invasion. The PLA has the right to forcibly dispel Pelosi’s plane and the US fighter jets, including firing warning shots and making tactical movement of obstruction,” Xijin wrote on Twitter. “If ineffective, then shoot them down.” China had previously said that Pelosi’s visit would amount to crossing a “red line” in relations between the two global superpowers.

Such a blatantly bellicose message from China is yet another sad example of how Biden and his whiz kids have eroded America’s hard-earned credibility on the global stage, first with the surrender of Afghanistan to the terrorist Taliban while cutting and running on stranded Americans trapped in the country and his latest debacle in Ukraine where tens of billions of dollars, unprecedented sanctions and a unified NATO have failed to beat back Russia’s invasion of its neighboring country.

Adding to the tension, China’s Foreign Ministry said that the White House was lying that Biden confronted Chairman Xi over his regime’s horrific human rights abuses during a phone call between the two leaders.

“I can tell you that allegations of genocide and forced labor in Xinjiang are pure lies,” said Foreign Ministry spokesman Lijian Zhao regarding the phone call.

According to White House Press Secretary, “genocide” & “forced labor” came up in last night’s call between Chinese & US Presidents. That is disinformation. pic.twitter.com/sKdZQfqVnJ

It’s the second time in recent weeks Biden’s tough words were disputed after the “leader” of the free world was all but called a lying dog-faced pony soldier by Saudi Arabia’s Foreign Minister over the claim that he confronted Crown Prince Mohammed bin Salman over the murder of Washington Post columnist Jamal Khashoggi during his failed trip to beg The Kingdom to increase oil production.

With the nation suddenly on the brink of a two-front war with two nuclear powerhouses, former President Donald J. Trump, who presided over an unprecedented period of peace with America’s adversaries genuinely fearing him when he was in the Oval Office, took to his Truth Social platform to accuse Pelosi of only making matters worse with her Taiwan trip.

“Why is Nancy Pelosi getting involved with China and Taiwan other than to make trouble and more money, possibly involving insider trading and information for her cheatin’ husband?” Trump wrote on Friday. “Everything she touches turns to Chaos, Disruption, and ‘Crap’ (her second big Congress flop happening now!), and the China mess is the last thing she should be involved in – She will only make it worse,” he added. “Crazy Nancy just inserts herself and causes great friction and hatred. She is such a mess!!!”

One thing is beyond argument and that is that China would have never dared to jump bad when Trump was in charge of American foreign policy.