Avenatti is facing up to 20 years in jail over wire fraud and aggravated identity theft charges stemming from allegations of the theft of advance payments for a book written by Daniel that alleges that former President Trump paid her hush money to cover up a relationship between them. She is accusing Avenatti of stealing $300,000 from the $800,000 advance payments on her book which claims to expose sordid details of her affair with Trump.

The discredited attorney has fired his defense counsel and is now representing himself.

Daniels took the stand for the first time on Thursday as a witness for the prosecution. After the conclusion of their case, Avenatti began to cross-examine his former client. She claimed he “stole from me and lied to me,” according to Law and Crime. “He lied to me and betrayed me and broke my trust, and I thought he was my friend.”

Blackwell and Camerota staged what they believed to be a dramatically funny reenactment of the cross-examination at the end of their segment. Blackwell reported that Avenatti had only been given minutes to cross-examine Daniels before the judge called it quits for the day.

“Now, there are no cameras allowed in the courtroom,” noted Camerota, “but we do have a transcript of their interaction, so I propose a dramatic reading–”

“I’m into it,” Blackwell responded.

“Okay, I think I should be Michael Avenatti and you should be Stormy Daniels, for obvious reasons,” Camerota snarked.

Oh, man. Michael Avenatti just dumped his public defenders in court and will represent himself moving forward against charges he stole $300,000 from Stormy Daniels.

This means Avenatti will be cross examining Daniels when she takes the stand tomorrow.

“Do you have a single text message, email, voice mail, or recording that says I would not take any money from your book deal, yes or no?” Camerota enquired.

“The judge then dismissed the jury,” he went on to add. “That was it, for today.”

Avenatti will continue his cross-examination of Daniels on Friday. He has asked for six hours to complete his questioning. “We’ll see about those six hours,” U.S. District Judge Jesse Furman declared before trial proceedings began.

Stormy Daniels is expected to be called to testify later today in Michael Avenatti's trial. Before the jury enters, Avenatti informs the court that he anticipates a six-hour cross examination.

Camerota asserted that she wished there were cameras in the courtroom because Avenatti and Daniels were both “tough customers, neither of them are easily intimidated.” She voyeuristically said it would be “fascinating to watch them interact with each other.”

“How does this go on for six hours, though?” Blackwell asked.

“How would you and I do a dramatic reading for that long?” Camerota wondered.

“Ah, we’ll only do twenty minutes or so,” Blackwell kidded before ending the segment.

Avenatti was convicted in 2020 of extortion, the transmission of interstate communications with intent to extort, and wire fraud in connection to threats he made against Nike.

Last year, a federal judge sentenced him to 2 1/2 years behind bars for those crimes. He is set to report to prison for that conviction later this year. 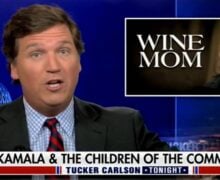