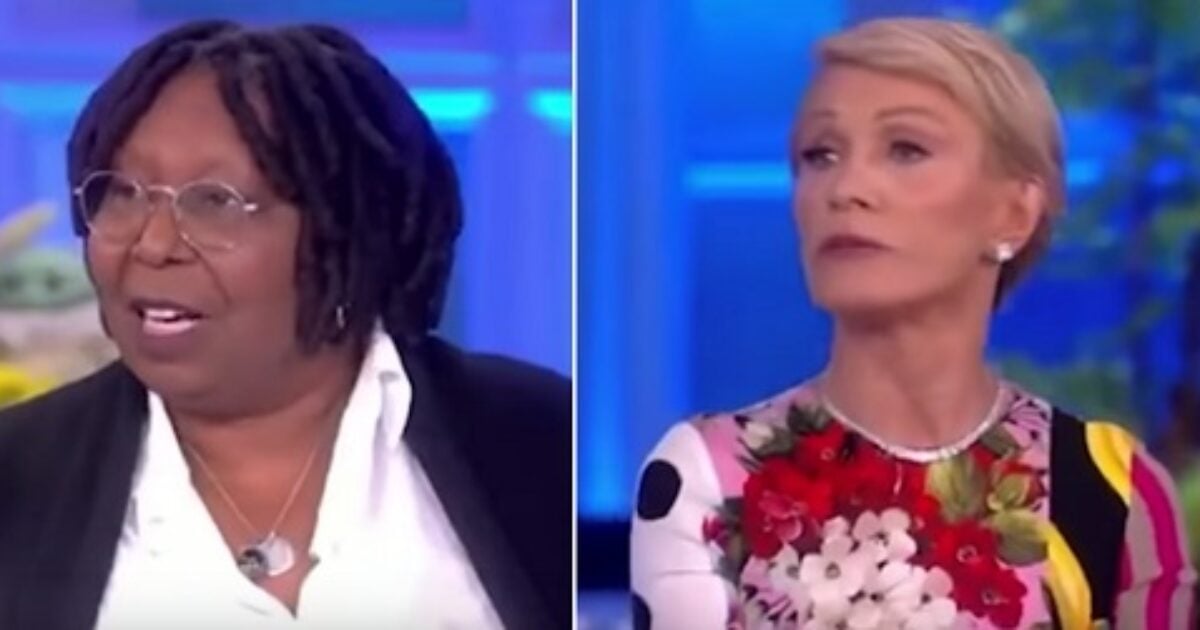 Entrepreneur Barbara Corcoran of the reality show “Shark Tank” made a faux pas during her appearance on “The View” Thursday when she joked about the body size of co-host Whoopi Goldberg.

Corcoran was a guest on the show, there to promote and celebrate Emma Grede, the first black female guest “shark” to appear on the business show series, when the social infraction occurred.

“The View” co-host Sunny Hostin, 52, was praising Grede and her denim brand, Good American, which makes jeans in a variety of sizes, when Goldberg said facetiously, “Well, I have to try them,” then gesturing at her backside, “Will they fit this COVID [butt]?”

Hostin and co-host Ana Navarro, 49, remarked that they both loved the jeans and were sure they would fit the 65-year old former actress and star of “Jumpin’ Jack Flash.”

This prompted Corcoran to jest, saying to Whoopi, “When you get finished with those jeans and decide you don’t like them, give them to me. I’m gonna make two pairs.”

While the comment drew some laughter from the panel, Goldberg appeared briefly stunned by the remark.

Navarro rushed in with her own retort in defense of Goldberg, saying, “Whoopi, let me just tell you something. Both Sara Haines and Jill Biden wore that dress already, on TV,” in reference to the floral dress Corcoran wore for the show.

As can be expected, the “fat-shaming” incident loosed a phalanx of Twitter warriors eager to put in their two cents.

“Barbara Corcoran went too far,” one viewer added and included a GIF of a laidback Rep. Alexandria Ocasio-Cortez, (D-NY).

“I can’t believe what Barbara Cochran [sic] said to Whoopi about those Jeans [sic],” another Twitter user wrote. “Hurtful was the look from Whoopi, but she rebounded.”

“I had to rewind and listen again just to be sure I heard right,” added another viewer. “But, being a lot smaller than @WhoopiGoldberg doesn’t make @BarbaraCorcoran a better person and this should be a learning lesson for young girls.”

Within hours, Corcoran issued an apology via Twitter, directed not so much to Goldberg but to those who may have been offended, adding that her on-air quip “wasn’t funny.”

“I just came back from The View and saw my old friend, Whoopi,’ Corcoran said at the start of the video. ‘As you well know, she has a phenomenal sense of humor and I’ve known Whoopi for years.”

“I made a joke at Whoopi’s expense that I now realize wasn’t funny. For anyone who I may have offended unintentionally, I just wanted to say I really am very sorry.”

Some on social media felt the apology laid the responsibility at the viewers’ feet and that Corcoran didn’t really take ownership of her blunder.

‘”To those I may [have] offended” is not an apology,” one Twitter user wrote in response to Corcoran’s video.

“It lends responsibility on the listener and implies they may be the one lacking a sense of humor. Take full responsibility and lead with only yourself,” wrote another.

Other Twitter users called attention to the fact that only minutes before, Corcoran had spoken to the panel about how social media makes young women feel as though they have to meet impossible body standards.

I really hate the “if I offended you, I’m sorry” apologies.

That’s not an apology. Essentially you’re saying “hey! You shouldn’t have been offended at all. But if you are, fine: sorry.”

Just own it all, Barbara.

People can’t take a joke these days. It was funny. What happened to not taking yourself so seriously and being OK to just have friendly banter and make light of a situation. No apologies were necessary – it was a joke.

I I’m pretty sure you were skinny shaming yourself and not trying to fat shame her. I’m saying this as a non-skinny person. It was actually funny even if it’s inappropriate. But I don’t think you intended any harm.

Huh? Skinny shaming isn’t a thing, but gaslighting is.

All of the “sharks” are rude and bullying to those seeking financing. I had to stop watching the show even though I loved getting to see the product pitches. You just didn’t realize that condescending talk doesn’t work in the real world and Whoopi didn’t need you, you need her!

I’m sorry. I thought it was funny. Real funny. Sorry. You should not have to apologize