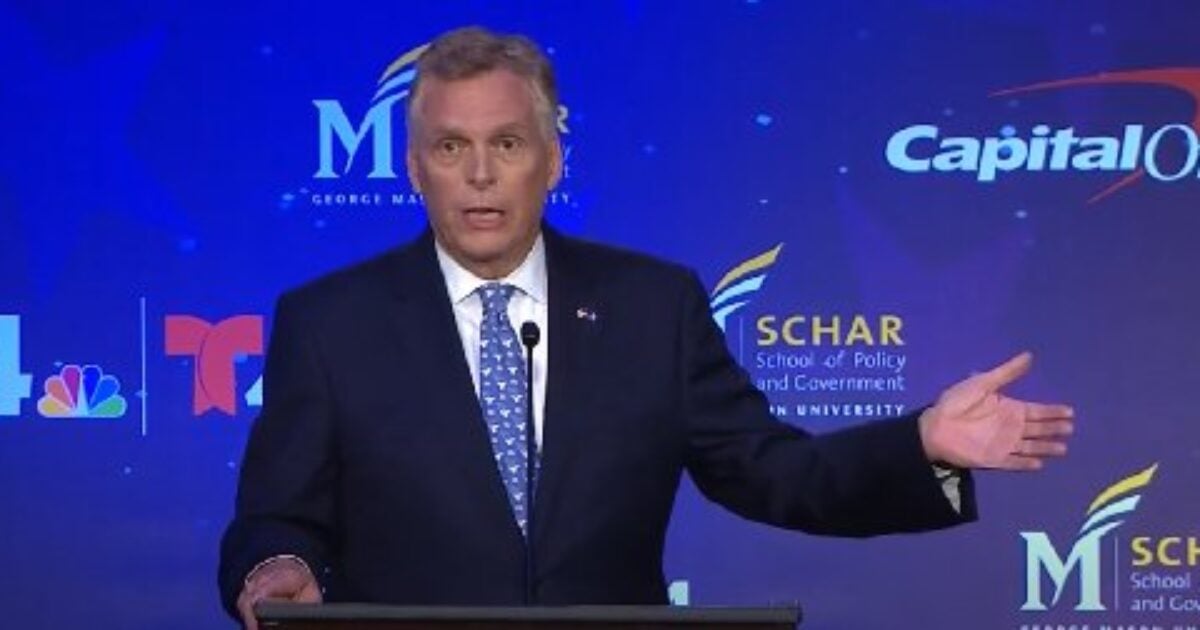 Conservatives excoriated Virginia gubernatorial candidate Terry McAuliffe after he declared during the second and final debate before the election that parents should not have a say in what schools teach their children.

“In regard to our kids in schools, we are called for everyone to love everyone,” Republican candidate Glenn Youngkin said Tuesday night. “And I agree with your conclusion, Terry [McAuliffe], that we should let local school districts actually make these decisions. But we must ask them to include concepts of safety and privacy and respect in the discussion and we must ask that they include parents in the dialogue.”

“What we’ve seen over the course of this last 20 months is our school systems refusing to engage with parents. In fact in Fairfax County this past week, we watched parents so upset because there was such sexually explicit material in the library they had never seen, it was shocking,” Youngkin stated. “And in fact, you vetoed the bill that would have informed parents that they were there. You believe school systems should tell children what to do. I believe parents should be in charge of their kids’ education.”

“I’m not gonna let parents come into schools and actually take books out and make their own decisions,” McAuliffe declared. “I stopped the bill that I don’t think parents should be telling schools what they should teach.”

He then asserted that he supports parents having the right to veto books rather than make decisions regarding which books are placed in school libraries.

Glenn Youngkin: "I believe parents should be in charge of their kids' education."

Terry McAuliffe: "I don’t think parents should be telling schools what they should teach." #VAgov pic.twitter.com/LqIlRMLKgj

McAuliffe vigorously advocated for transgender students and made it clear that local school districts should be free to make independent decisions on controversial issues ostensibly without parental input.

He vetoed a bill that was referred to as the “Beloved” bill in 2016 that was meant to give parents the power to block their children’s exposure to sexually explicit books in schools, according to The Washington Post. The legislation would have stipulated that teachers would have to inform parents of any “sexually explicit material” being shown in the classroom and offer them the option to have their child opt-out of the lesson because of it.

McAuliffe was criticized by Youngkin when he was governor for vetoing the bill. He contended at the time that “parents should be in charge of their kid’s education.” Youngkin also brought up the reaction by enraged parents over Fairfax County High School allegedly presenting “sexually explicit” material in the school library without prior parental consent.

The race between Youngkin and McAuliffe is said to be very tight and will take place on Nov. 2. Parents up in arms over what their children are being force-fed in school and those against COVID mandates could well swing the election in Youngkin’s favor.

Senior adviser to former President Trump Stephen Miller tore into McAuliffe over his statement on teachers and parents, tweeting, “Make sure every parent in Virginia hears this before they vote.”

Senator Ted Cruz tweeted, “Always dangerous when Dems are accidentally honest: McAuliffe thinks he should decide what school kids are taught, and pesky parents should shut up & obey!”

Conservative pundit Laura Ingraham didn’t hold back either, “Do Virginians want freedom or not? The answer can’t be McAuliffe.”

Rapid Response Director for the GOP Tommy Pigott responded, “If not parents, who? These are their kids! Message received loud and clear: If you’re a parent concerned about what your kid is being taught, don’t vote for Terry McAuliffe.”

Other piled on as McAuliffe was clobbered online for his statements during the debate:

Terry McAuliffe is pro-choice unless the decision belongs to the parents of a school-aged kid. https://t.co/u1ER60LBvQ

I'm playing Democratic candidate for governor Terry McAuliffe's money quote from last night coming into every break this AM: "I don't think parents should be telling schools what to teach." @GlennYounkin won the debate on his own merits, but Terry just kept face planting. #Loser

“I’m not going to let parents come into schools, take books out and make their own decisions “ Terry McAuliffe https://t.co/PKFG2sGAp7

The place is packed to the rafters & @GlennYoungkin is kicking the crap out of #Mcauliffe pic.twitter.com/m0Vrrdr6Ql