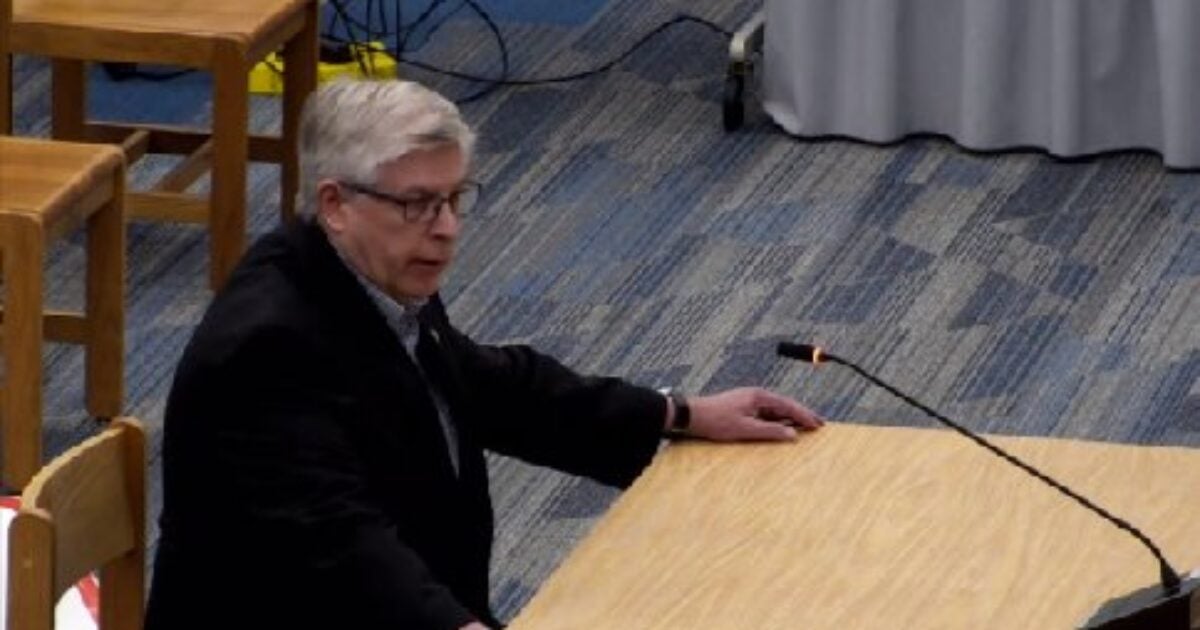 Mayor Craig Shubert of Hudson, Ohio was wildly cheered as he told all five local school board members to resign at a meeting or face criminal charges over sexually explicit high school class materials that he called “child pornography.”

The teaching materials for the Liberal Arts II class were brought to his attention by concerned parents. “It has come to my attention that your educators are distributing essentially what is child pornography in the classroom,” Shubert informed the Hudson Board of Education in a meeting held on Monday.

“I’ve spoken to a judge this evening. She’s already confirmed that. So I’m going to give you a simple choice: You either choose to resign from this board of education or you will be charged,” Shubert warned the board members. He said he would like to see all five members resign by the end of the month.

His comments to the board are in response to a book being used in high school classrooms called “642 Things to Write About.” The material in the book includes asking students to “write a sex scene you wouldn’t show your mom,” “rewrite the sex scene from above into one that you’d let your mom read,” “write an X-rated Disney scenario,” and another section asks students to “write a scene that begins: ‘It was the first time I killed a man,’” according to Cleveland.com.

This over material given to students by educators suggesting they write about sex and drinking, among other topics. pic.twitter.com/bYRb1gygsi

Parents were enraged when they found out about the deviant learning prompts. Speakers at the school board meeting called the material “disgusting” and a form of “grooming.”

Erik Dirker, a police officer with the city of Stow, demanded that the school install cameras in classrooms during the meeting.

“Police officers wear body cameras to monitor their behavior, and they have brief interactions with the public. You guys have our kids all day and we don’t know what’s going on in the classrooms,” Dirker remarked. “I demand that there be cameras in classrooms as a matter of public record that we can pull and view what is being taught to our kids and what is being said to our kids.”

Hudson City Schools Superintendent Phil Herman asserted that the material contained “inappropriate and offensive writing prompts” in a statement and announced that the books were removed from schools on Monday.

“The district immediately determined this writing resource should not be in the hands of our students, and on Monday, collected the books from the students enrolled in the course,” Herman declared. “It is important to note that at no time were any of these inappropriate writing prompts assigned as part of the class.”

“It is clear that as a district we did not properly review this resource, and for that, we sincerely apologize,” he proclaimed. “We take great pride in the instructional experience of our students and take very seriously anything that negatively impacts our mission to provide an educational program that provides for the development of each child in a safe, nurturing environment.”

“Again, we are reviewing our approval processes to make sure that nothing similar happens in the future,” Herman concluded.

Hudson High School principal Brian Wilch and his administration team have apologized to parents. Then he sought to justify the material by saying that the course was offered in association with Hiram College and that the “642 Things” book had been used before.

“We did not exercise due diligence when we reviewed this resource and as a result, we overlooked several writing prompts among the 642 that are not appropriate for our high school audience,” Wilch admitted. “…We feel terrible. At no time were any of these inappropriate prompts selected or discussed, but still they were there and they were viewable, and you can’t unsee them.”

It’s unclear whether the board can actually be held criminally liable for material that was being used in a classroom. However, Schubert did state he had already spoken with a judge about the matter.

“We’ve never heard of criminal charges [filed against a school board] for curriculum,” claimed Ralph Lusher, who is the staff attorney with the Ohio School Boards Association.

David Zuro, who is the board’s president, said on Wednesday that none of the school board members have indicated any intention of resigning.

“While we respect the Mayor’s position within the City of Hudson, in accordance with the State laws of Ohio, the supervision of the public schools of this District is the responsibility of the Board of Education,” Zuro curtly said in a statement according to NBC News.

The mayor is not the only one who wants the school board members fired:

Way to lay down the law! These “educators” should face prison time! #sickos

Both, you don’t get to resign and not be held criminally accountable

And that folks is how it’s done. pic.twitter.com/lyHnDIk6rE

They should be prosecuted. This is nuts. If anyone defends that crap, then, in my book, you’re ok with pedophilia and probably a pedo yourself.

I surely hope that the class is removed, the teachers are fired, as well as the principal and the curriculum director.