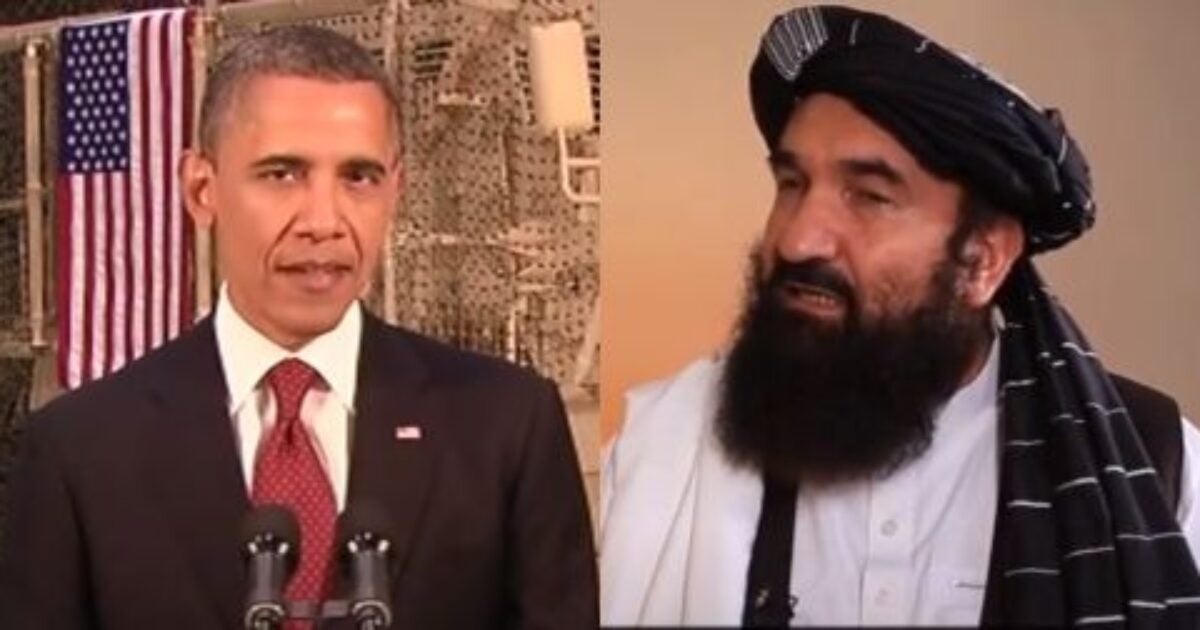 Former President Barack Obama released five Taliban commanders in 2014 in exchange for an American deserter and those terrorists were the ones who reportedly engineered the sacking of Kabul, Afghanistan.

Obama shares the blame for the implosion of Afghanistan after releasing the Gitmo 5 to Qatar who proceeded to allow them to plot their return to the country and seize control. They are now referred to as the “Taliban 5.”

It all began with U.S. Army Sgt. Bowe Bergdahl, who deserted his post in Afghanistan in 2009 and spent five years with the Taliban. Two soldiers were permanently disabled searching for him and others reportedly died. Obama brokered a deal that had Bergdahl returned to the U.S. in exchange for the Taliban 5 who are now ravaging Afghanistan and butchering Afghans.

One of the detainees named Khairullah Khairkhwa met with Biden’s team in Moscow to negotiate “final terms of the U.S. withdrawal.” The terrorist actually cut a deal with the Biden administration and we are now seeing that play out before our eyes. All thanks to the shortsightedness and incompetence of Barack Obama and Joe Biden.

Wait til you find out who let the 5 Taliban generals out of Gitmo pic.twitter.com/ROw11OBRLE

“I started jihad to remove foreign forces from my country and establish an Islamic government, and jihad will continue until we reach that goal through a political agreement,” Khairkhwa said at the Moscow summit. He was arrested after the terrorist attacks on 9/11 and was held at Gitmo from 2002 to 2014. Khairkhwa is being described as the “mastermind of the regime change” in Afghanistan.

The others released with Khairkhwa were Mohammed Nabi, who served as chief of security for the Taliban in Qalat; Mohammad Fazl, who allegedly presided over the mass killing of Shiite Muslims in Afghanistan in 2000 and 2001; Abdul Haq Wasiq, who served as the Taliban deputy minister of intelligence; and Mullah Norullah Nori, who was a senior Taliban commander in Mazar-e-Sharif in 2001.

At the time that Obama was prepping to cut loose Khairkhwa, the Pentagon warned him that he was “too dangerous to release.” Obama ignored that warning and he was included in the Taliban 5 that were set free.

Mullah Khairkhwa previously served as the Taliban’s interior minister in Afghanistan. He was in charge of the enforcement of brutal Islamist punishments, including beheadings and stonings. The Pentagon accused him of having close ties with Osama bin Laden and bin Laden’s al Qaeda henchmen.

“Soon after gaining their freedom, some of the notorious Taliban Five pledged to return to fight Americans in Afghanistan and made contacts with active Taliban militants there. But the Obama-Biden administration turned a blind eye to the disturbing intelligence reports, and it wasn’t long before the freed detainees used Qatar as a base to form a regime in exile[…],” the New York Post reported.

“After raiding the presidential palace in Kabul, a group of armed Taliban fighters told Al Jazeera that they were arranging to bring back their Gitmo-paroled leadership from Qatar upon securing the capital. One unidentified fighter, who blasted America for ‘oppressing our people for 20 years,’ claimed he had also been locked up at the Guantanamo Bay facility. It’s more evidence that Gitmo catch-and-release policies facilitated the fall of Afghanistan to the enemy that Washington vowed to crush after 9/11,” the Post emphasized.

Twenty years later, Afghanistan is turning out to be more unstable and even more dangerous than it was before, thanks not only to Biden’s catastrophic blunder but also to the disastrous actions of former President Obama.

If Obama and Biden had never released the Taliban 5 from their prison in Guantanamo Bay, Cuba, it is likely that Afghanistan would not have been seized by the Taliban so quickly if at all. Many contend that their actions have arguably led to the deaths now and in the future of Americans and have lost a $1 trillion war as well. The world is a much more dangerous place since the Taliban 5 were released back into the wild putting the Taliban back on the map and America once again in its crosshairs.

Meanwhile, crickets from Obama on Afghanistan.

Obama was torched on social media over the revelation:

Obama, is the most destructive president in governments history.

America is hopelessly lost, and yes it all started with Barack.

Easy to see where this is headed. An engineered Afghan “refugee crisis”. We’ll be told we must open borders and accept these refugees since we left Afghanistan in shambles. (Taliban/Isis members will be intermixed with these refugees). New wave of Islamic terrorism coming to US.

this was all part of the plan from day 1.

It’s the worst time in history to be an American ! The whole world is laughing , cursing & contemplating on what America just did or did not do in Afghanistan.