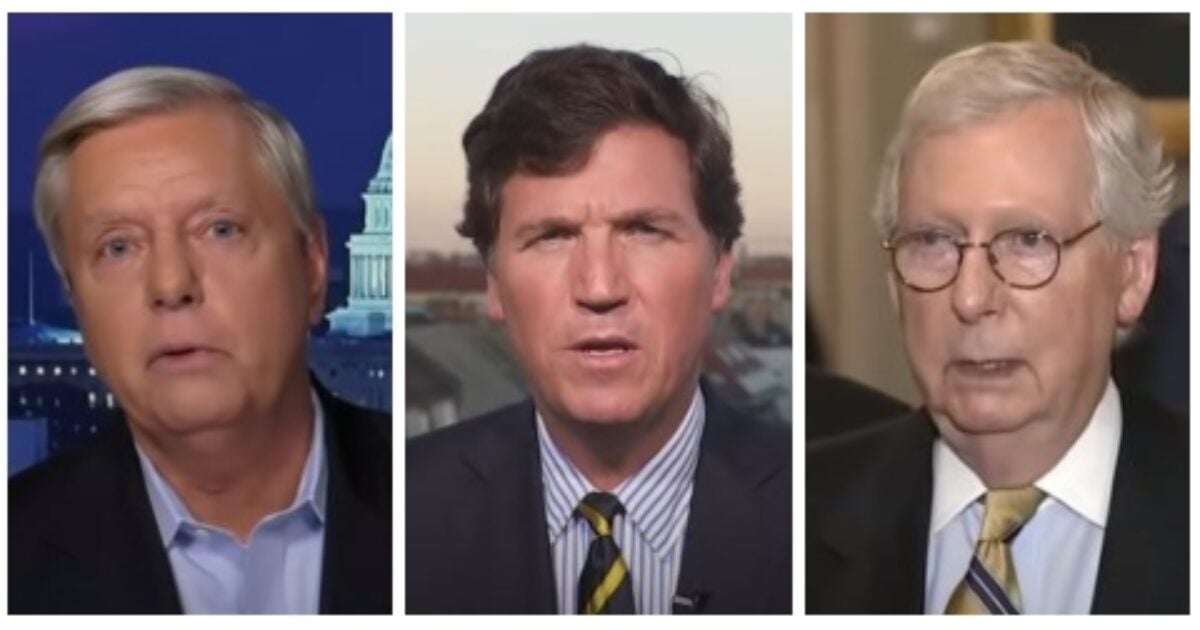 Fox News host Tucker Carlson slammed spineless, weak-kneed Republican senators who have thrown their support behind the Democrats’ massive $1 trillion “infrastructure” bill that has very little to do with actual infrastructure.

Seventeen Republican senators voted to move forward this week with the “infrastructure” bill. It is 2,700 pages long and contains nifty little items such as criminalizing “science denial” and making “gender identity” federal law.

“It’s 2,700 pages long. It would cost more than a trillion dollars. It will not pay for itself, despite what they told you,” Carlson noted via his show “Tucker Carlson Tonight” on Friday. “And much of it has nothing whatsoever to do with infrastructure. Meaning fixing our crumbling roads and bridges and airports and train stations and all the rest that embarrasses America.”

“Instead, this bill will make science denial official, it will enshrine gender identity in federal law,” he contended. “It will allow the government to track your driving. Why? So they can charge you a fee for every mile you go. This in addition to the gas tax.”

And it gets even worse. Carlson highlighted a dystopian provision that would also allow the government to monitor you in your car.

“And scariest of all, this bill requires all new vehicles in the United States to come with monitoring technology, such as eye scanners or breathalyzers, and that means that going forward, you will need the express permission of your federal overlords before you start your car in the morning. Because it’s their car now,” he remarked.

“As of tonight, 20 Republican senators appear to support this lunacy. The final vote is this weekend. So if you have views about this, you might want to let them know right away. They assume you’re not paying attention so they can do whatever they want to you, and in this case they are,” Carlson stated.

He then listed the names of the GOP senators who are supporting the bill:

“Now, a few of these people plan to retire soon, thank heaven. But most of them intend to get reelected at some point. And it might be good if voters made that impossible,” Carlson urged his viewers.

As he correctly pointed out, unless something really shifts on the issue, this bill will now most likely become law. In large part thanks to Republicans who are handing a win to President Biden and the radical Democrats that should never have happened.

Next up, the $3.5 trillion spending package that will go along with this monstrosity and it could pass as well. Although it should be noted, the reconciliation package will have to have every Democrat vote for it in order for it to pass without Republican support. Holdouts include Sens. Kyrsten Sinema and Joe Manchin so far.

That won’t be the end of the spending either. With full control of the House and the Senate, look for the Democrats to go on a further spending spree that will absolutely ravage the nation financially as well as Americans in general.

Conservative Americans don’t want any of this social engineering passed:

Call your @SenateGOP ! Tell them to walk away from this crap #InfrastructureBill !

As he should call them out.
This goes to show that everyone needs to be held accountable not just one side. Good for him.

@TuckerCarlson Thanks Tucker! You listed off both of my representatives which surprised and disappointed me. Furthermore you gave information about what is in this bill that I’ve not heard elsewhere that I find startling.

This is the main reason of where we are now and sinking lower. Weak kneed GOP Senators who have no courage or moral authority to stand and fight for the people who put them in office. They don’t deserve our support and must be removed ASAP.

The vehicle surveillance connected to the grid strategy is about about the most Orwellian thing ever. Cars are the one of the few freedoms people have and they are trying to take it away.

Both my senators are in for this debacle. I AM SO PISSED AT THEM BOTH @SenatorRisch @MikeCrapo

Jeez, biden and his cartel are trying to push some of the worst bills know in history.
For the people(it’s not)
Reconciliation(it won’t)
Infrastructure(it doesn’t)

THANK YOU @TuckerCarlson FOR EXPOSING THESE FAKE REPUBLICANS WHO ARE GOING WITH THE FLOW INSTEAD OF STANDING UP FOR AMERICANS!

SO FAR REPUBLICANS HAVE ROLLED OVER & LET @POTUS & @SpeakerPelosi DO WHATEVER THEY WANT EVEN THOUGHT IT’S HURTING THE MIDDLE CLASS & TEXANS!

I can’t believe this!! Monitoring you and your driving? Fees for how far you drive and worse!!! We already have to fight for our Rights against the DemonRats and now the Swamp Dwellers Republicans!!

Horrifying, this is the GOP! Weak, useless sellouts. Always same tools, Romney, Collins, Murkowski along w the other 3 responsible for perpetuating the Russia hoax to cripple GOP President. Graham, Burr and McConnell. DC is cesspool of corruption, payoffs and power consolidation