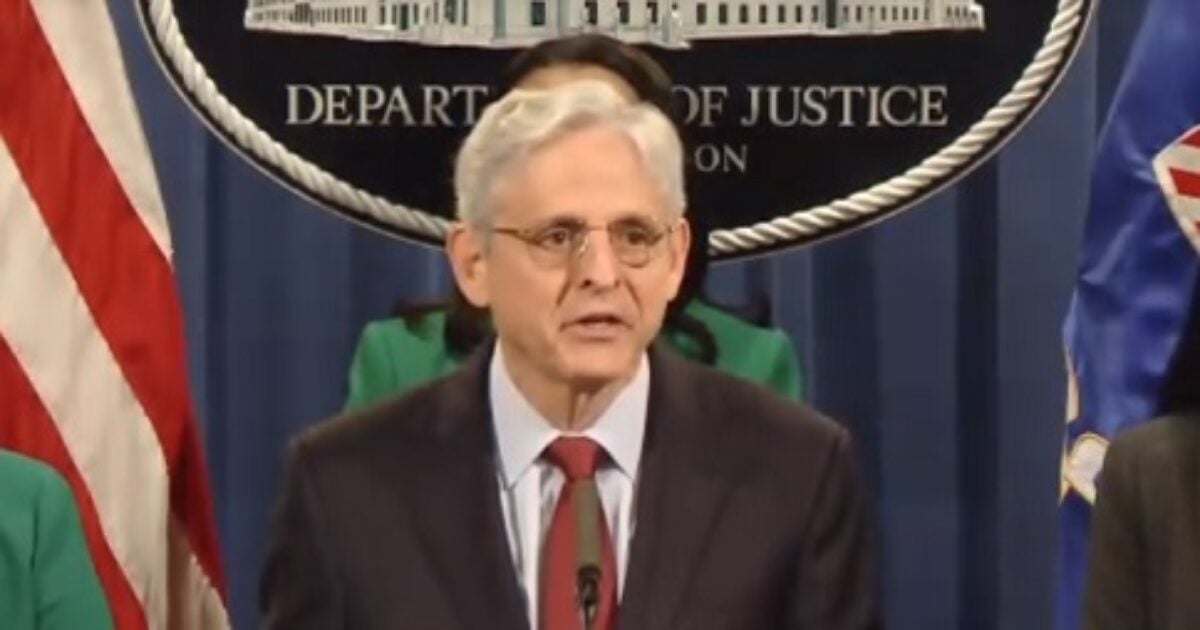 The state of Georgia took plenty of heat from the Trump campaign for allegedly not protecting the integrity of the 2020 election, yet is now being sued by Biden’s Justice Department for taking legislative action to shore up the voting process.

Attorney General Merrick Garland announced at a Friday news conference that the DOJ is suing the Peach State under Section 2 of the Voting Rights Act.

“Where we see violations of federal law, we will act,” the attorney general said.

“Recent changes to Georgia’s election laws were enacted with the purpose of denying or abridging the right of Black Georgians to vote on account of their race or color, in violation of Section 2 of the Voting Rights Act,” Garland added.

BREAKING: Biden admin. is suing the state of Georgia, alleging "changes to Georgia's election laws were enacted with the purpose of denying or abridging the right of Black Georgians to vote on account of their race or color."

In effect, he pushed the Democratic Party-backed myth of voter suppression in an effort to justify the action.

“The right of all eligible citizens to vote is the central pillar of our democracy, the right from which all other rights ultimately flow,” Garland said. “This lawsuit is the first step of many we are taking to ensure that all eligible voters can cast a vote; that all lawful votes are counted; and that every voter has access to accurate information.”

Assistant Attorney General Kristen Clarke for the DOJ’s Civil Rights Division accused the state of Georgia of being motivated by race in passing the law.

“The right to vote is one of the most central rights in our democracy and protecting the right to vote for all Americans is at the core of the Civil Rights Division’s mission,” said Clarke.

“The Department of Justice will use all the tools it has available to ensure that each eligible citizen can register, cast a ballot, and have that ballot counted free from racial discrimination. Laws adopted with a racially motivated purpose, like Georgia Senate Bill 202, simply have no place in democracy today,” she continued.

Georgia’s new election law came under fire for establishing restrictions to absentee voting and establishing firm rules for ballot drop boxes in response to concerns about chain of custody.

Few will argue that mail-in ballots were the difference-maker in the 2020 election.

Another feature of the new law is that it requires ID not just for in-person voting, but also for mail-in voting. It also expands early voting opportunities.

Gov. Brian Kemp stood by the law, saying it was designed to make it “easy to vote and hard to cheat in Georgia.”

He also denounced the lawsuit as political posturing from the administration.

“This lawsuit is born out of the lies and misinformation the Biden administration has pushed against Georgia’s Election Integrity Act from the start,” the Republican said in a statement.

“Joe Biden, Stacey Abrams and their allies tried to force an unconstitutional elections power grab through Congress — and failed,” he said, citing the For the People Act. “Now, they are weaponizing the U.S. Department of Justice to carry out their far-left agenda that undermines election integrity and empowers federal government overreach in our democracy.”

This is an outrageous abuse of power and politicization of the Justice Department – Joe Biden & Merrick Garland are now using the law enforcement power of the federal government to advance the Democrats’ false attacks on Georgia. This is wrong https://t.co/TyxGGC8C84