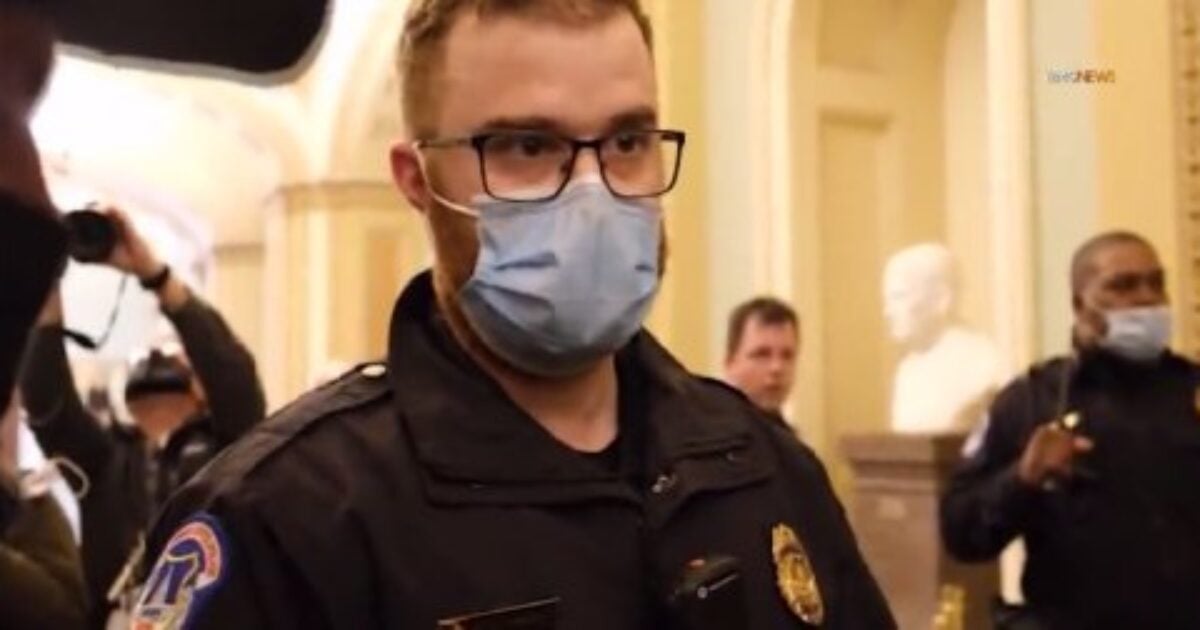 A video surfaced on Sunday that shows U.S. Capitol Police officers conversing and reasoning with a number of protesters including the “QAnon Shaman” who had already entered the building on Jan. 6.

Numerous conflicting videos have come to light since the Capitol riot took place. Some ostensibly show officers allowing protesters to enter, while others show individuals breaking windows and doors to gain access to the building. It’s not clear how everyone entered the building that day.

This latest video to surface shows an officer speaking with protesters after they were already in the building. He admonishes them to not do anything violent.

Officer Keith Robishaw has allegedly been identified as the officer speaking in the video. He haltingly warns in the segment over the raised voices of protesters: “We’re not against… you need to show us… no attacking, no assault, remain calm.”

William Watson, a man reportedly was out on a drug trafficking bond who participated in the riot and was arrested in January, calls on the protesters to act peacefully. “This has to be peaceful,” Jacob Chansley, the “QAnon Shaman” also yelled. “We have the right to peacefully assemble.”

Federal prosecutors alleged in a complaint filed on January 8 against Chansley: “Robishaw and other officers calmed the protestors somewhat and directed them to leave the area from the same way they had entered. Chansley approached Officer Robishaw and screamed, among other things, that this was their house, and that they were there to take the Capitol, and to get Congressional leaders.”

Chansley and others would later enter the Senate Chambers followed by a police officer. He led a number of protesters in prayer and then took a seat in Vice President Mike Pence’s chair. Others rifled through the belongings of lawmakers and papers they found in the chamber.

The “QAnon Shaman” is being charged with several counts of trespassing and disorderly conduct. He has been in prison since January and was denied bail pending his trial. He has no previous criminal record.

The new video is originally from RMB News and was provided to the American Greatness news site. It is reportedly a clip of a much longer video that has not been released yet.

There were a number of videos on Jan. 6 showing people entering the Capitol building:

they didn’t “breach” or “storm” the capitol building THEY WERE LET IN pic.twitter.com/SVeo6BcFV0

Who the hell was this “cop”?? Why encouraging people through? pic.twitter.com/OcXWCh33P9

Just saw this @NewYorker video for the first time of the moment Q-Shaman temporarily ascended to the presidency of the Senate. pic.twitter.com/ka916CyWNt

And there are still those who want answers concerning the shooting and killing of Ashli Babbitt by a police officer that day. The officer was never charged or publicly identified after the shooting.

The House Homeland Security Committee announced Friday that they have reached a deal to form a bipartisan 9/11-style commission to review the Jan. 6 events.

The committee chairman, Rep. Bennie Thompson (D-MS) and Republican, Rep. John Katko (R-NY) have both agreed on legislation that will create the commission. It could be voted on as soon as next week according to lawmakers.

“There has been a growing consensus that the January 6th attack is of a complexity and national significance that we need an independent commission to investigate,” Thompson declared. “Inaction – or just moving on – is simply not an option.”

House Speaker Nancy Pelosi (D-CA) said it was urgent to study the circumstances of the attack: “On Jan. 6, one of the darkest days in our history, our temple of democracy was attacked by insurrectionists,” Pelosi posited. “The gleeful desecration of our Capitol resulted in multiple deaths, physical harm to over 140 members of law enforcement and terror and trauma among staff, support workers and members.”

Katko proclaimed that the Capitol is still a target for extremists of all ideologies and that lawmakers must prevent future attacks: “An independent, bipartisan commission will remove politicization of the conversation and focus solely on the facts and circumstances surrounding the security breach at the Capitol as well as other instances of violence relevant to such a review,” he remarked. “This is about facts, not partisan politics.”