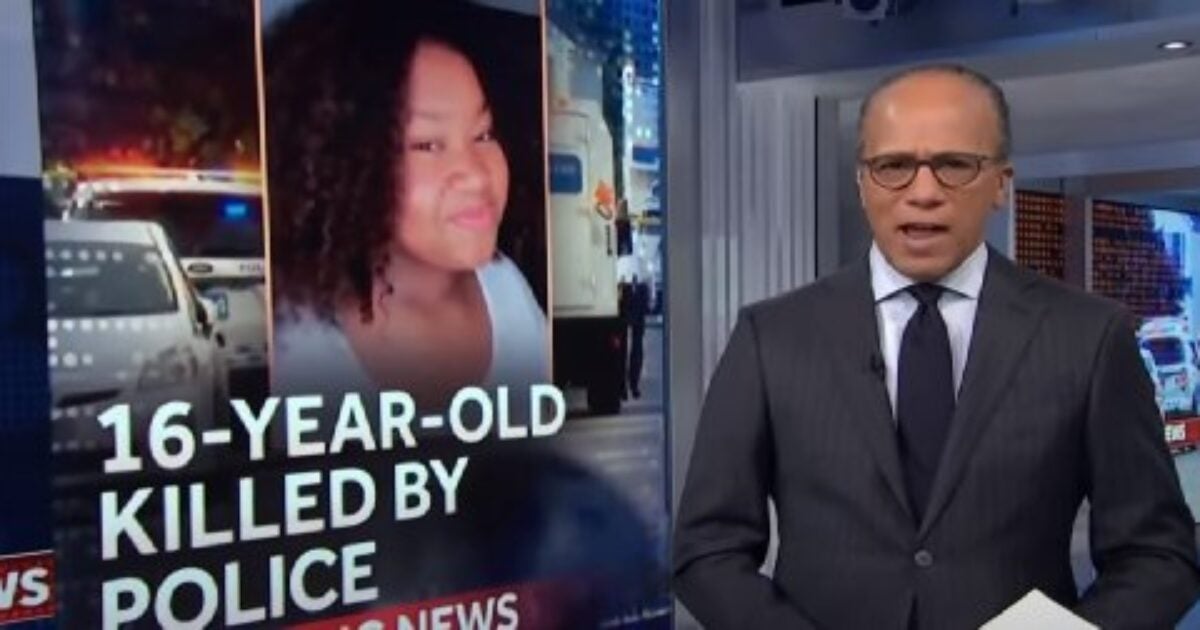 Critics shredded “NBC Nightly News” on Wednesday for deceptively editing the 911 call and bodycam footage of the shooting of Ma’Khia Bryant in Columbus, Ohio during their reporting on the tragedy.

In the original bodycam footage released shortly after the shooting, 16-year-old Ma’Khia Bryant was shown charging another girl with the knife in her hand. Officer Reardon responded to the scene and can be heard yelling for everyone to get down a number of times before he fired four shots directed at Bryant. The girl was hit and later passed away.

News analyst Nicholas Fondacaro of the Media Research Center accused the network of editing the 911 call and leaving out a woman saying: “It’s these grown girls over here trying to fight us, trying to stab us, get here now!” Instead, NBC played an audio clip from the call where the woman is yelling: “We need a police officer here now!”

Fondacaro also highlighted a segment of the police bodycam footage that NBC played. He remarked that it didn’t “show viewers the knife in the attacker’s hand just before the shots.” It should be noted that NBC did not conceal the fact that Bryant had a knife.

“A police officer shot and killed a 16-year-old black girl in Columbus, Ohio saying she was threatening others with a knife,” NBC anchor Lester Holt stated as the segment began. The chyron at the bottom of the screen read: “POLICE FATALLY SHOOT 16-YEAR-OLD BLACK GIRL HOLDING KNIFE.” A picture of the knife on the ground from the footage is also displayed.

While ABC and CBS highlighted the knife in the attacker’s hand, this is how NBC highlighted it. On the ground. pic.twitter.com/5v9odEuOIj

Fondacaro contrasted the presentation by NBC to those of ABC’s “World News Tonight” and “CBS Evening News.” Both of those media outlets included the stabbing reference and gave a closeup of Bryant brandishing the knife.

Lester Holt recently received a journalism award and stated that “it’s become clear that fairness is overrated,” and then noted that “the idea that we should always give two sides equal weight and merit does not reflect the world we find ourselves in.”

“That the sun sets in the west is a fact. Any contrary view does not deserve our time or attention,” Holt commented. “Decisions to not give unsupported arguments equal time are not a dereliction of journalistic responsibility or some kind of agenda. In fact, it’s just the opposite. Providing an open platform for misinformation, for anyone to come say whatever they want, especially when issues of public health and safety are at stake, can be quite dangerous. Our duty is to be fair to the truth.”

The media and the White House are following the narrative that the police shooting was racially motivated and unnecessary as well as unjustified.

“She was a child,” the White House proclaimed in a statement. “We know that police violence disproportionately impacts black and Latino people and communities and that black women and girls, like black men and boys, experience higher rates of police violence.”

NBC Nightly “News” is pure hard-left propaganda with less credibility than the tabloids. It gets as many Pinocchios as CNN and MSNBC, neither of which fact check or correct their stories, either. I watch it for belly laughs and social media post fodder.

NBC knows exactly what they are doing. They are helping the leftist phony narrative so they can have an excuse for their insurrection.

Why on earth are they deliberately altering facts!! It’s so sinister!! Outright propaganda

Not the first time I have seen NBC deceptively edit. Presented 180 degrees from fact. No way this is not intentional. I would never again take what NBC reports at face value.

Deceptive editing to misinform the public right into another episode of racially charged riots.

This is a big part of what’s wrong today.