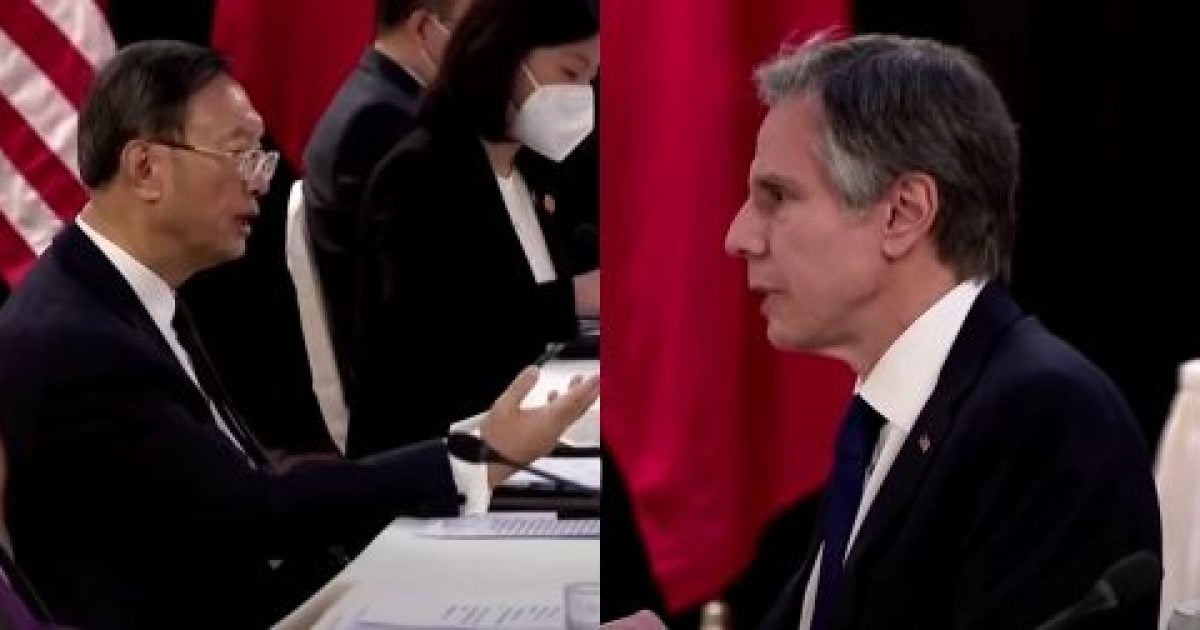 In a summit on Thursday, Chinese diplomat Yang Jiechi bluntly accused the U.S. of being weak and then proceeded to call out Biden’s foreign policy team for alleged violations of human rights against Black Lives Matter.

The combative meeting took place in Anchorage, Alaska, and was between Secretary of State Antony Blinken along with National Security Adviser Jake Sullivan and their Chinese counterparts, State Councilor Wang Yi and Chinese Communist Party foreign affairs chief Yang Jiechi. The summit between the two super-powers was the first bilateral meeting that China and the U.S. have had since President Biden took office. Biden has previously not taken a strong stance on China but with this latest clash, relations between the two countries are incredibly strained.

The White House was insistent that the meeting take place on American soil. White House Press Secretary Jen Psaki had previously vowed that the diplomatic team would bring up China’s human rights abuses. With that foreknowledge, the Chinese turned the tables on Biden’s team first and accused the U.S. of violating the rights of Black Lives Matter.

China struck immediately after Blinken referred to the “rules-based international order” and then voiced “deep concerns” with China’s actions in “Xinjiang, Hong Kong, Taiwan, cyberattacks on the United States, and economic coercion toward our allies.” Yang gave a lengthy reply that lasted 17 minutes. A four-minute photo-op devolved into a diplomatic war of words that lasted over an hour.

The Chinese diplomat strongly objected to what he termed as a violation of diplomatic protocol. He brutally pointed out that the U.S. was not in a position of strength to lecture China on anything. Then he pivoted to lecturing the American diplomats on their “deep-seated” human rights problems:

Blinken tried to counter China’s accusations by stating that after speaking with our allies, he was hearing “deep satisfaction that the United States is back, that we’re re-engaged with our allies and partners,” and “deep concern about some of the actions your government is taking.”

The secretary of state boasted that a “hallmark” of American “leadership” was a willingness to admit mistakes. That the U.S. engaged in “a constant quest to form a more perfect union,” but confronted its challenges “openly” and “transparently.”

“China will not accept unwarranted accusations from the U.S. side,” he declared. He also pointed out that recent interactions had forced relations “into a period of unprecedented difficulty” that “has damaged the interests of our two peoples.”

’There is no way to strangle China,” he proclaimed.

China was slapped with sanctions just days before the summit for their crackdown on political freedoms in Hong Kong.

After the confrontation in Alaska and Biden’s clash with Russia’s Putin as well as North Korea, #ChickenJoe started trending on Twitter.

And more anger over the handling of the summit and the ensuing perceived humiliation of the United States was evident. USMC vet and NewsMax host Greg Kelly nailed it: “WE LOST. It never would have happened this way with ⁦@mikepompeo.”

WE LOST. It never would have happened this way with ⁦@mikepompeo⁩ pic.twitter.com/dXZHqYJdAs