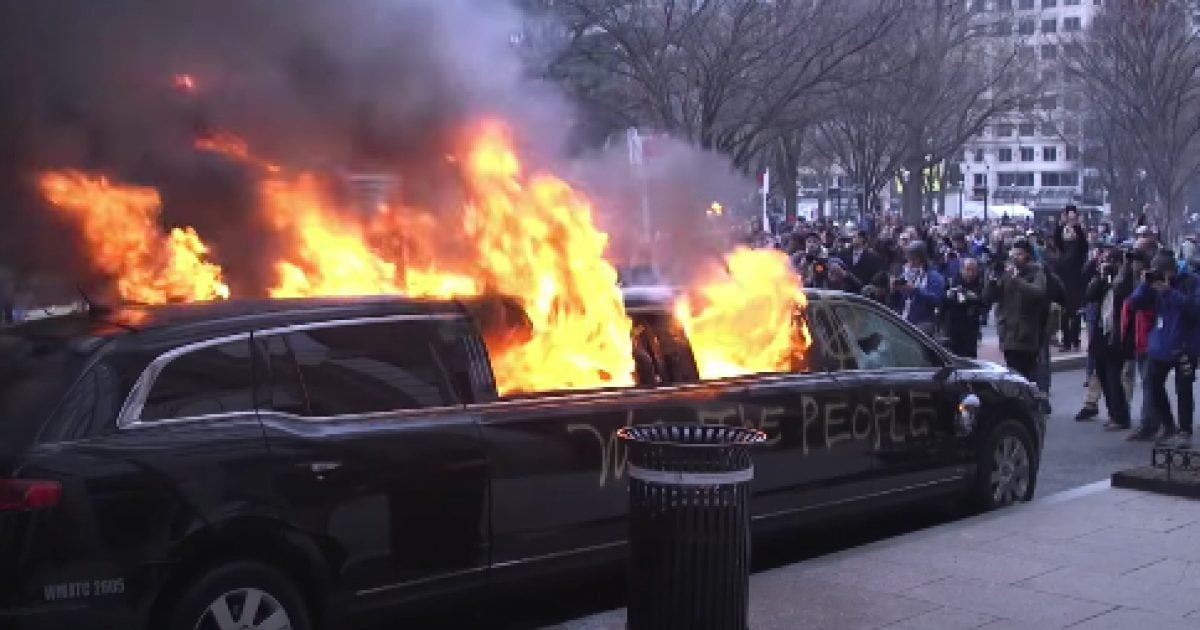 Editor’s note: An original version of this story claimed that none of the rioters were tried or convicted. In fact, several were tried but were acquitted, while 20 pleaded guilty to misdemeanors and one to a felony, serving four months. The vast majority of charges, however, were dropped. The story now reflects those changes.

As the FBI continues to arrest dozens of people allegedly involved in the Capitol Building riot earlier this month ahead of President-elect Joe Biden’s inauguration, it was just four years ago when similar rioting took place throughout Washington, D.C., as newly-inaugurated President Donald Trump began his term.

Only then, instead of right-wing protesters, it was a riot dominated by supporters of anarchist groups like Antifa and left-wing organizations including Black Lives Matter.

Reports at the time noted that more than 214 people were indicted on felony rioting charges.

“On the morning of January 20, protests over Donald Trump’s inauguration turned violent when black-clad ‘anti-fascist’ protesters smashed storefronts and bus stops, hammered out the windows of a limousine, and eventually launched rocks at a phalanx of police,” CNN reported Feb. 22, 2017.

The network reported that police were forced to respond to the throngs of rioters with flash-bangs and other crowd control devices. Six police officers were reportedly injured; 230 people were arrested on Inauguration Day.

Felony rioting, CNN noted, carries a maximum penalty of 10 years in prison and a maximum fine of $25,000.

“The indictment accuses the defendants of using a tactic called ‘Black Bloc’ in which people conceal their identities with dark or black clothing and accessories such as scarves, sunglasses, helmets, and masks,” the network added.

Some rioters assaulted a limo driver and destroyed a government vehicle.

CNN went on to report that “the several hundred demonstrators who actively confronted officers were vastly outnumbered by the thousands of nonviolent protesters” — which was the case Jan. 6, when President Trump addressed a massive crowd of more than 100,000 people at a rally, before a few hundred of them descended on the Capitol Building.

In the end, 20 rioters pleaded guilty to charges related to violent protesting, the New York Times reported, including one person who copped to a felony and served four months in prison. After two group trials resulted in acquittals for all defendants, the government dropped charges against the rest, the Associated Press reported.

The motion to dismiss charges against the last 39 people charged “seemingly ends an 18-month saga that started with the Justice Department attempting to convict more than 190 people,” the AP reported.

“That effort saw the government facing off against an intensely coordinated grassroots political opposition network that made Washington the focus of a nationwide support campaign offering free lodging for defendants, legal coordination, and other support,” the AP added.

Two earlier group trials resulted in losses for the government because prosecutors were “hindered by the fact that most protesters wore similar black clothing and covered their faces,” the newswire reported.

After losing both of them, the Justice Department decided to drop charges against 129 more defendants — cases in which the government believed it had the strongest evidence.

“This is huge news,” Washington-based activist Dylan Petrohilos, who was initially arrested but had his charges dropped earlier, said at the time. “The solidarity we showed as defendants won out.”

The strategy involved persuading defendants, at times over the objections of their attorneys, not to accept plea bargains.

“Solidarity was what won the case,” Sam Menefee-Libey, a member of the leftist DC Legal Posse activist collective, said. “I hope that organizers and people on the left study it.”