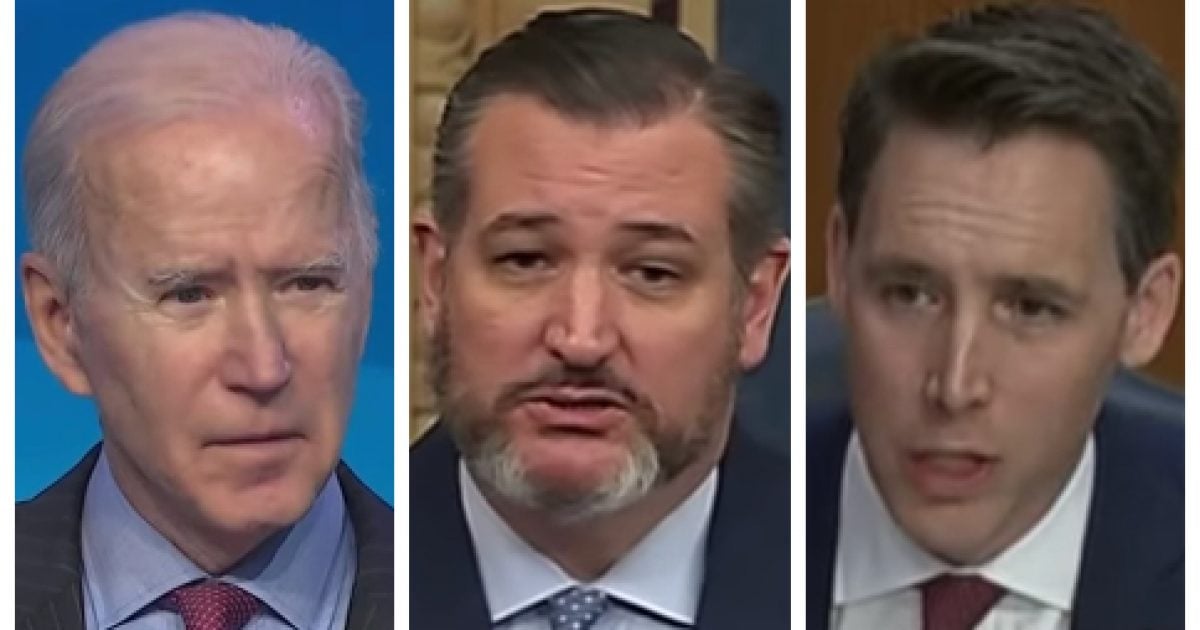 President-elect Joe Biden blasted Sens. Ted Cruz (R-Texas) and Josh Hawley (R-Mo.) on Friday, saying both should be “flat beaten” when they run for reelection for taking part in spreading “the big lie,” which both senators said was a blatant effort to pain them as Nazis.

“I think they should just be flat beaten the next time they run,” Biden remarked after being asked by a reporter if the two should resign.

Several Democrats have called on both to give up their seats, but neither indicated they have any intention of doing so, Fox News reported.

Biden went on to say that Cruz and Hawley are a minority within their own party.

“The American public has a real good clear look at who they are,” the president-elect said. “They’re part of the big lie, the big lie.”

The phrase “The Big Lie” was popularized in Nazi Germany by the regime’s propaganda minister, Joseph Goebbels.

“If you tell a lie big enough and keep repeating it, people will eventually come to believe it,” he was once quoted as saying.

“Really sad,” Cruz noted on Twitter in response to Biden’s remarks. “At a time of deep national division, President-elect Biden’s choice to call his political opponents literal Nazis does nothing to bring us together or promote healing.”

Really sad. At a time of deep national division, President-elect Biden’s choice to call his political opponents literal Nazis does nothing to bring us together or promote healing.

This kind of vicious partisan rhetoric only tears our country apart. https://t.co/YMMepv1OhV

“This kind of vicious partisan rhetoric only tears our country apart,” he added.

“President-elect Biden has just compared me and another Republican Senator to Nazis. You read that correctly. Think about that for a moment. Let it sink in,” he said.

“Because I raised questions in the format prescribed by the laws of the United States about the way elections were conducted in the state of Pennsylvania, just as Democrats did about other states in 2001, 2005, and 2017, he is calling me a Nazi,” Hawley added.

He then offered up some advice to the incoming president: “He should act like a dignified adult and retract these sick comments. And every Democrat member of Congress should be asked to disavow these disgusting comments.”

Both men led efforts in the upper chamber to object to slates of electors from various states that went for Biden over allegations that voting rules were unconstitutionally altered ahead of the Nov. 3 election.

For his part, Cruz called for the creation of a panel fashioned after one formed after the contested election of 1876 to conduct an emergency 10-day audit to look into the allegations.

Both continued their objections even after hundreds of Trump supporters breached the U.S. Capitol Building, even as several other Republican senators who had previously committed to objecting withdrew them.

Biden went on to claim that Cruz and Hawley were “as responsible” as President Donald Trump for making what he said were fraudulent election claims.

“If he’s [Trump] the only one saying it, it’s one thing, but the acolytes that follow him, like Cruz and others, they are as responsible as he is,” Biden said.

Biden went on to praise Republicans who withdrew their objections.

“I was so proud,” the president-elect said regarding Senate Majority Leader Mitch McConnell (R-Ky.). “What he said on the floor of the United States Senate was in fact the right thing to do.”

The Senate leader urged Republican members not to object to the electoral college vote because doing so would “damage our republic forever.”

Biden also praised Sen. Mitt Romney (R-Utah), saying he had “enormous respect” for his opposition to Trump and to the objections.

In 2012, when Romney ran against President Barack Obama and Biden, the then-vice president told a black audience Romney would “put y’all back in chains.”