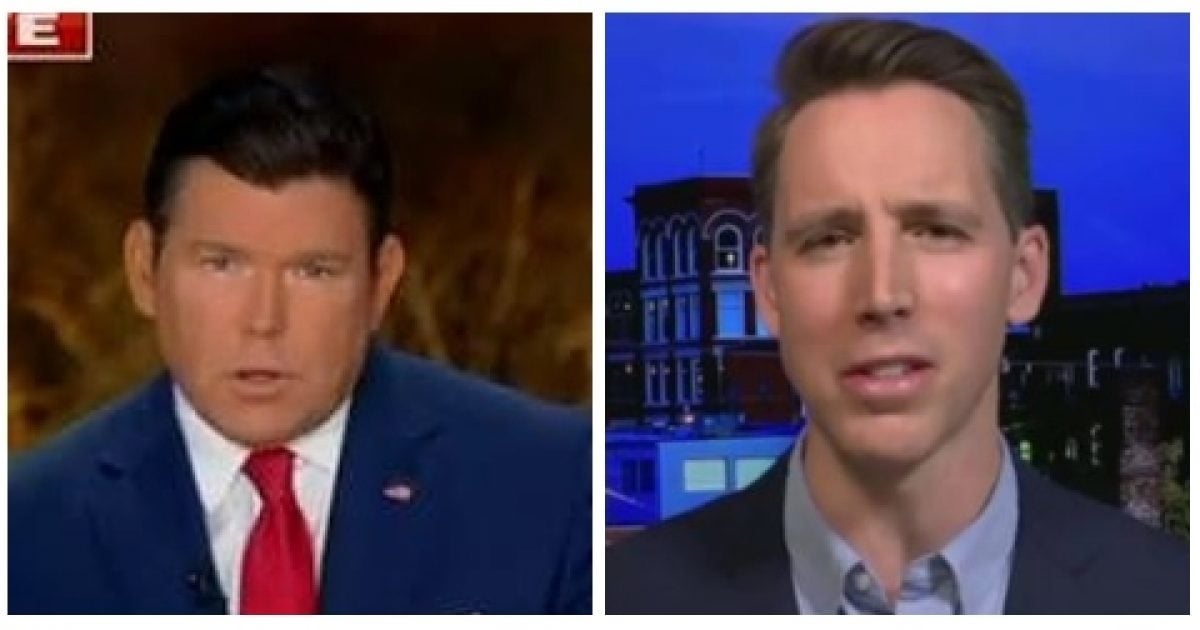 U.S. Senator Josh Hawley doubled down on his pledge to “raise the concerns” of his constituents and challenge electors from several swing states.

The Missouri Republican held his ground in a Fox News interview, explaining that voters have “major concerns” over the integrity of the 2020 presidential election and he intends to follow through with some action on Wednesday when Congress meets to certify the Electoral College votes. Fox News host Bret Baier repeatedly pressed Hawley about his intentions and whether he believes President Donald Trump will remain in office.

“Are you trying to overturn the election as it stands now? To keep President Trump in the White House as of January 20th?” Baier asked Hawley Monday during Fox News’ special coverage of the Georgia Senate runoff elections.

“What I’m trying to do, Bret is to raise the concerns that my constituents have all over Missouri. I have heard from people like I’ve never heard before over the last month about this election,” Hawley replied. “They have major, major concerns about the integrity, the fairness of this election. And they expect me to stand up and to raise those concerns. And this is the only forum I have to do it.”

Hawley announced last week that he wanted lawmakers to investigate potential voter fraud in several states and to pass measures “to secure the integrity of our elections” moving forward. He became the first GOP senator to openly join Republican House members who pledged to object to certifying the presidential-election results when Congress meets on Wednesday, thus forcing a debate and vote in both the chambers of Congress.

“America is proud of Josh and the many others who are joining him. The USA cannot have fraudulent elections!” Trump wrote in a tweet expressing his gratitude to the Missouri senator.

“This is the forum that the Constitution and the statutes provide,” Hawley said on Monday, explaining that his constituents also “want action, they want an investigation into these irregularities.”

“They want new election laws to make sure that our elections are secure going forward. This is my chance to stand up and speak for them as somebody has got to take their concerns seriously and speak up. That’s what I’m going to do,” he said.

“So does that mean that you do not expect that you will be able to change the outcome in this process at all?” Fox News host Martha MacCallum asked the lawmaker.

“I can only speak for myself and my own vote. My colleagues in the Senate, you see various Senate Republicans say they won’t support, they either won’t object to these states, or they won’t support any challenge or debate…so their votes are their votes and people have to reach their own conclusions,” Hawley responded.

“It is vital we be heard on the issue and we have a chance to debate it. And that’s why I’m going to object,” he added.

“I just want to pin you down on what you’re trying to do,” Baier interjected after a discussion about voting irregularities that occurred specifically in Pennsylvania and how the courts would not even take up the lawsuit filed by the Trump campaign.

“Are you trying to say that, as of January 20th, that President Trump will be president?” the Fox News anchor asked.

“Well, that depends on what happens on Wednesday,” Hawley replied. “I mean, this is why we have the debate.”

“No, it doesn’t,” Baier shot back,  “I mean, the states, by the Constitution … they certify the election. They did certify it. By the Constitution, Congress doesn’t have the right to overturn the certification, at least as most experts read it.”

Hawley countered by explaining the laws even as Baier continued to try to get him to admit to something he was not actually saying. Eventually, the senator reiterated that “this is my only opportunity during this process to raise an objection and to be heard.”

“I don’t have standing to file lawsuits. I’m not a prosecutor anymore … I can investigate claims of voter fraud on my own, but I do have a responsibility, in this joint session of Congress to either say ‘I’ve got no problem with it’ or ‘I do have a problem with it,'” he asserted.

MacCallum joined the pile-on by directly asking Hawley if he was positioning himself for the future and bigger political aspirations. Hawley shut her narrative and, once again, reiterated his obligations as an elected representative for his state.

“I say that my job as the United States senator from Missouri is to speak up for the concerns of Missourians. And that’s exactly what I’m going to do on January six and that’s all the reason I’m doing what I’m doing,” he said. “If I didn’t do it I’m not doing my job.”