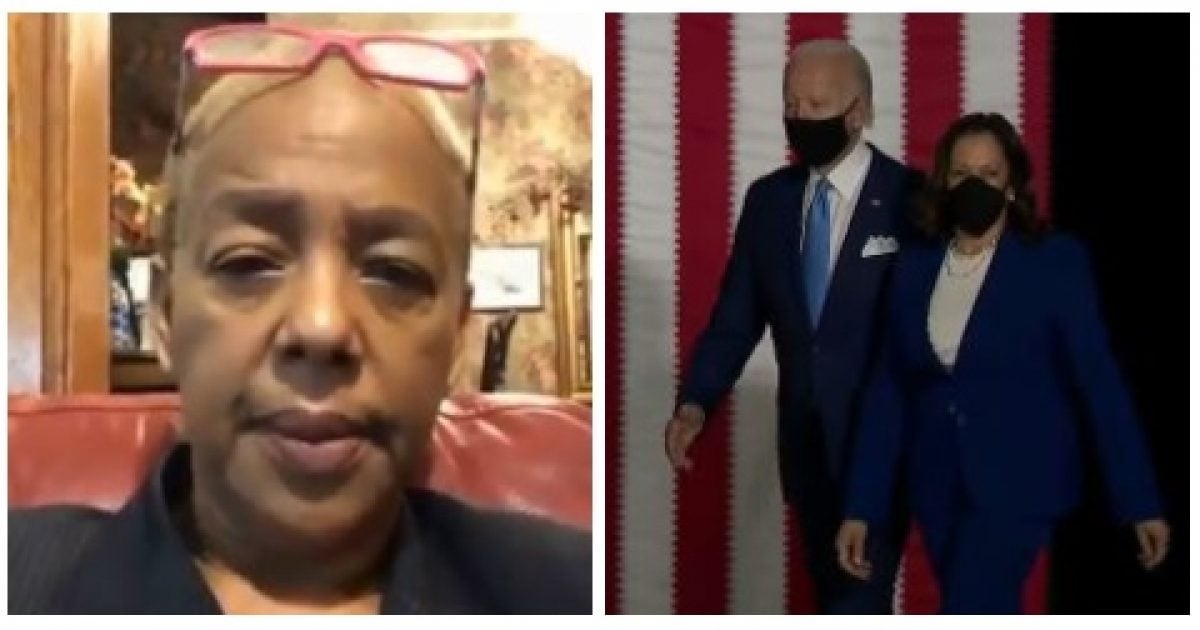 Michigan state Rep. Cynthia Johnson declared that the “Biden-Harris administration owes the city of Detroit” in a newly-posted video message.

The Democrat posted another head-scratching rant on social media as she continues to hold her seat in the state government despite facing backlash over her behavior. Johnson was stripped of her committee seats this week and may face further disciplinary action for controversial videos she had already posted in which she appeared to threaten President Donald Trump’s supporters.

Johnson ignited backlash last week after her treatment of witnesses who were speaking with Trump’s legal team and then complained she was being targeted by “Trumpers” in a video message in which she called on her “soldiers” to “make them pay.” Facebook and Twitter apparently had no issues with the rants and have neither flagged nor removed them.

Michigan House Speaker Lee Chatfield announced Johnson’s removal from several committees due to her actions and the Democrat took to social media again to declare she was “not worried,” that she had put her life “on the line” and that Democrats Joe Biden and Kamala Harris owe a debt to the city of Detroit.

Cynthia Johnson is the internet gift that keeps on giving pic.twitter.com/lARTn8bJOr

“I’m good. I’m okay, I’m not worried,” Johnson said in her latest video message. “I’m not going underground. I’m not changing my f—ing phone number. I ain’t doing none of that!”

“But we gonna change some sh-t that’s been going on in the city of Detroit, things that have happened to our people and our community,” she added.

“Oh yes, the Biden-Harris administration owes the city of Detroit. Oh yes,” she continued, not elaborating on her cryptic message.

Johnson accused witnesses of “lying” during the public Michigan House Oversight Committee hearing last week and was called out of order by the committee chair after her rant. Her condescending and improper behavior sparked widespread criticism with calls for disciplinary action or removal from office.

“It may not be done under the state, but you’re allowing people to come in here and lie, and I know they’re lying!” she shouted during the hearing with Trump’s legal team.

After her disrespectful behavior at last week’s hearing, Johnson posted a series of Facebook posts claiming she was being harassed by people from around the country.

“And for those of you who are soldiers, you know how to do it. Do it right. Be in order. Make them pay,” Johnson had said in one of her videos complaining about the death threats she received after the hearing.

State House Speaker Lee Chatfield announced that Johnson would be stripped of her committee assignments.

“Threats to Democrats or Republicans are unacceptable and un-American,” Chatfield said on Wednesday. “They’re even more unbecoming of an elected official. Rep. Johnson has been stripped of her committees and we’re looking into further disciplinary action as the proper authorities conduct their investigation.”

“I think this is a woman who has been through a lot. And I think it’s important that every single one of us give one another a little bit of compassion and grace,” the Democratic leader said Thursday, possibly referring to Johnson having a loved one in the hospital.

“In the simple requirement that she show up to do her job last week at a hearing with Rudy Giuliani — where she was exposed to COVID, frankly, and everyone who was there was — has now made her the target of a lot of racist attacks and threats on her life,” Whitmer added. “None of this is acceptable. None of it is acceptable.”

Delightful @GovWhitmer believes removing #CynthiaJohnson from all committees went too far.
“I believe it is crucial right now that we show one another some grace, & empathy & compassion.”
Whitmer has asked them to reconsider Johnson’s punishment.
-She’s begging for her own grace! pic.twitter.com/xzoPI1Rpcw

There is no word yet on whether Whitmer still holds that view in light of Johnson’s latest declaration about Biden and Harris owing a debt to the city of Detroit.

Cynthia Johnson needs to be banned from public office. The hatred she spewed is not becoming of a public official. What’s even more appalling is Facebook & Twitter allowed her rant to remain on social media. Wonder how long it would have remained if it were a conservative post?

This is like watching a car wreck in slow motion. This thing is self destructing right in front of us. Cringe.

Is she an addict ? That is a really bizzare way for a person of prominence to behave

This woman is totally nuts

She just indicted HERSELF with that speech.
Bizarre. Is she ON something? Or stupid? Or just a hybrid of evil and crazy and angry?

All that damn cheating. I’m pretty sure they owe Detroit everything 🤣🤣🤣