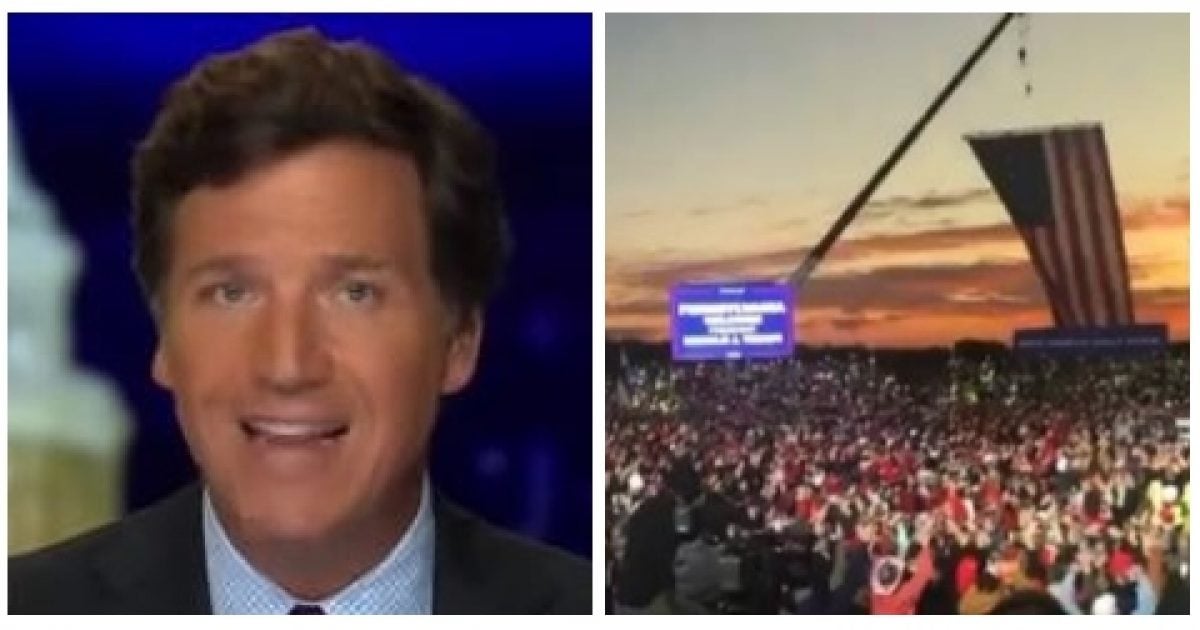 Fox News host Tucker Carlson used a photo of President Trump’s Pennsylvania rally as a metaphor for the 2020 election and the condition of American politics.

The photo from the president’s rally in Butler over the weekend may not be a prediction of who will ultimately be sworn in in January, but as Carlson contended in his monologue on the eve of the election, it provided a striking visual message about America’s elite ruling class.

“Butler is like a lot of places you will find in this country once you head inland from the coasts,” the Fox News host said on “Tucker Carlson Tonight,” beginning his show and his monologue with an image from the rally held Saturday in the town north of Pittsburgh.

“It’s a former industrial town, they made Pullman railcars there for many years, but it’s been losing population for decades. There are still a lot of nice people in Butler. For $60,000, you can buy a decent house there,” Carlson continued.

“It’s a place you might be happy in, but our professional class is not impressed by Butler. They don’t consider Butler, Pennsylvania, or places like it, the future. To them, places like Butler are embarrassing relics of a past best forgotten, the men of Butler may have built this country and they did, but they mean nothing to our leaders now,” he said.

To drive that point home, Carlson noted how no one in Washington, D.C., New York or Los Angeles said anything when large numbers of people in Butler suddenly began “killing themselves with narcotics,” eventually prompting residents to build a memorial in the middle of town.

“Given all of that, it was interesting how the people around Butler feel about Donald Trump. Here’s a picture of the president’s rally there on Saturday night. Tens of thousands of people came, so many people that the crowd obscured the horizon. It looked like a visit from the Pope,” Carlson said. “When was the last time a political speech drew that many people?”

58,000 showed up for President Trump in Butler, PA. Those are rock star numbers. Biden literally can’t fill a minivan. pic.twitter.com/8xr5TvyhxB

Yet the mainstream media did not investigate it for the phenomenon that it was, instead choosing to pan the rally as a “superspreader” event, focusing on people not wearing masks and potentially infecting other attendees with COVID-19.

“Why did all those people come? Why?” Carlson wondered.

“People in Butler knew all of that, but on Saturday, they went to the Donald Trump rally anyway,” Carlson explained, going on to give a stirring picture of how Trump has given a voice to people who have long been sneered at by the beltway elites.

Sorry I just had to post another picture from The Boss’ rally in Butler, PA.

“They’re not deluded, they know exactly who Trump is, they love him anyway. They love Donald Trump because no one else loves them. The country they built, the country of their ancestors fought for over hundreds of years has left them to die on their unfashionable little towns mocked and despised by the sneering half-wits with finance degrees, but no actual skills, who seem to run everything all of a sudden,” Carlson said.

“Whatever Donald Trump’s faults, he’s better than the people in charge. At least he doesn’t hate them for their weakness,” he continued.

If I don’t sound like a typical Washington politician, it’s because I’m NOT a politician. If I don’t always play by the rules of the Washington Establishment, it’s because I was elected to fight for YOU, harder than anyone ever has before! https://t.co/gsFSghkmdM pic.twitter.com/eVdVbUUwPM

“Donald Trump in other words is and has always been a living indictment of the people who run this country, that was true four years ago when Trump came out of nowhere to win the presidency and it’s every bit as true right now, maybe even more true than it’s ever been and it will remain true regardless of whether Donald Trump wins reelection,” he contended.

“Trump grows because they failed, it’s as simple as that,” he added, pointing out that if those “in charge” had even done a “halfway decent job with the country they inherited,” or were not so selfish, then Trump would still be hosting “Celebrity Apprentice.”

“But they didn’t. Instead, they were incompetent and narcissistic and cruel and relentlessly dishonest. They wrecked what they didn’t build, they lied about it. They hurt anyone who told the truth about what they were doing,” Carlson said. “That’s true. We watched.”

The United States is “still a great country, the best in the world,” Carlson concluded, slamming the nation’s ruling class as “disgusting.”